Petition for FIA to reprimand Horner has over 1000 signatures 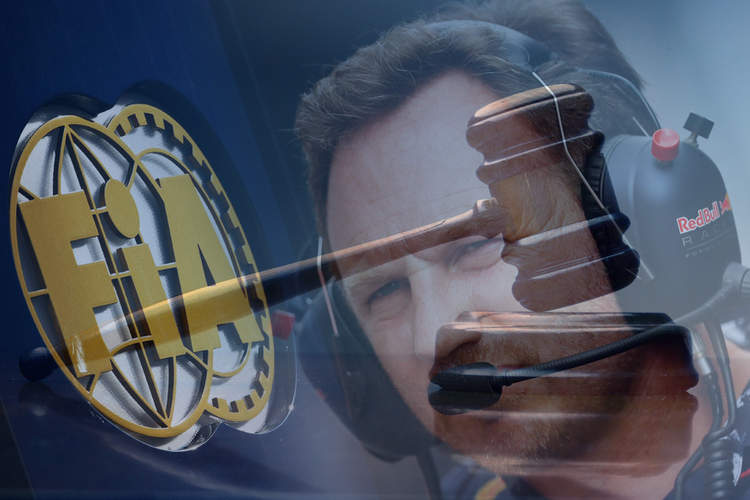 Red Bull boss Christian Horner has attracted the wrath of Formula 1 fans, after he accused Lewis Hamilton of “dirty driving” during the 2021 British Grand Prix, with a petition signed by over 1,000 supporters (and growing) demanding he be reprimanded by the FIA.

Immediately after the crash at Silverstone on lap one of the race, Horner took to the radio in a direct message to Race Director Michael Masi, heard live during the race broadcast on TV: “That corner, he was never anywhere near alongside. Every driver who has driven this circuit knows that you don’t stick a wheel up in the inside at Copse. That is an enormous accident.

“It was 100% Max’s corner. So, you know, as far as I’m concerned, full blame lays on Hamilton who should never have been in that position. You could have had a massive accident. Thank God he’s walked away unscathed. So, I hope you’re going to deal with it appropriately.”

Horner took it a step further when talking to Channel 4: “I think it was a desperate move. He failed to make the move in the first part of the lap, which he was obviously geared to do, and then it was just a desperate move sticking a wheel up the inside which you just don’t do.

“You boys know as well as anyone, Copse is one of the fastest corners in the world. You don’t stick a wheel up the inside. That’s just dirty driving,” declared Horner.

Intentionally or not, Horner’s words triggered an avalanche of disturbing racial and hate laden abuse on social media directed at Hamilton which, on Wednesday, prompted Mark Hudson, from the Philippines, to launch a call to reprimand the Red Bull boss to the Federation Internationale de l’Automobile (FIA) on the Change.org website.

Hudson stated in the petition headline: “Christian Horner needs reprimanding by the FIA over his outburst live on TV.”

And added: “On Sunday the 18 July at Silverstone race track a racing incident took place between Lewis Hamilton and Max Verstappen. Following this Christian Horner went on live TV with verbal outbursts against Lewis Hamilton.

“Even though Lewis had a penalty, many professional drivers and ex drives view it as a racing incident and it was within the FIA rules. Horners outburst then lead to mostly Red Bull fans attack Lewis and other fans who thought it was a racing incident on social media, even going as far as giving out death threats.

“Racing fans feel that Horner was the flame that fueled the fire. We are asking the FIA to look into this and take action against Horner and the Red Bull team.”

At the time of writing, over 1,000 fans had signed the petition, with the number growing by the minute as we monitored the progress.

Comments by petition signatories accuse Horner and Red Bull of bringing the sport into disrepute, some of those highlighted below: 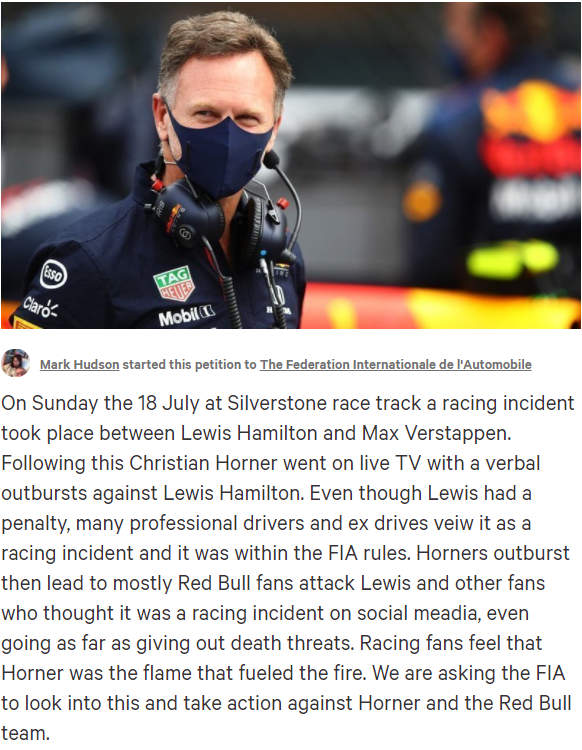