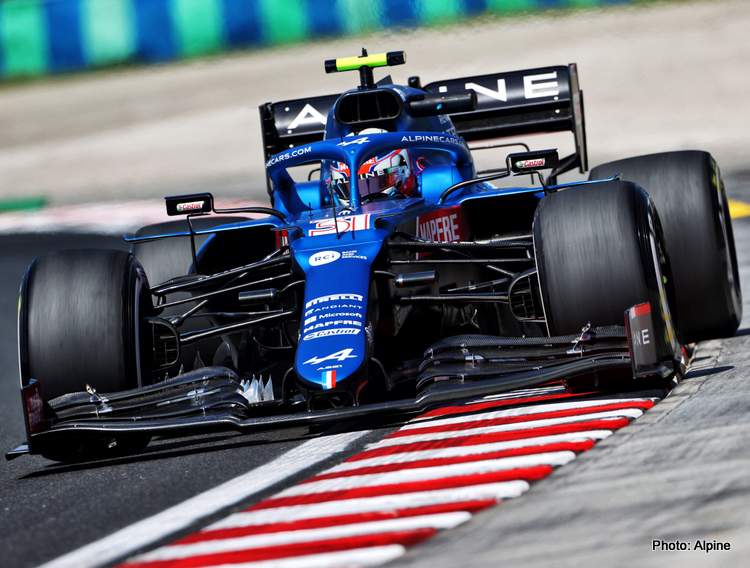 Esteban Ocon’s change of chassis has made a huge difference to the Alpine driver who followed up his ninth place at Silverstone by setting the fourth-fastest time in FP2 day during practice for the 2021 Hungarian Grand Prix.

During the driver’s press conference Thursday, Ocon declared his relief that his team sorted the problem: “Straight away when we put the car down for FP1 [at Silverstone], we saw that everything was working back to how it felt three races ago, and that’s very good news.

“It was a big effort from the team to try and diagnose what were the issues and what to change. So those doubts are out of the way now and everything is working as it should.

“There were a lot of different parts that we changed, together with the chassis. It was not only the chassis but when you take the chassis out, you check all the components that go with it and that has been a good thing, to rebuild the car, check exactly if everything was correct and rebuild it fresh basically.”

On Friday, at Hunagroing, Ocon put the tweaks to good use, ending the afternoon session fourth fastest, 0.747s shy of the top time and four-tenths up on teammate Fernando Alonso.

He reported afterwards: “It was a good Friday practice overall. The conditions were very tricky with the heat, which must be a record here. I’ve never seen track temperatures above 60C in my career!

“It’s very challenging to deal with the warm temperatures and having to manage the tyres, brakes and the car is a big exercise. Understanding all of that is key, but it looks like it will be much cooler tomorrow.

“Today we were competitive, and the car felt decent on the one lap we did on Softs. It’s a positive start to the weekend, I enjoy driving here, but tomorrow we have to keep working hard for qualifying, which we know is an important session at this track,” added the Frenchman.

In the sister car, Alonso was good seventh and said in his summary: “It was an OK day. Obviously, the Hungaroring is a very different type of circuit to Silverstone, and you really need to adapt to these low-speed corners and the amount of action around a lap.

“We tested a few different things on the car, some of which were thinking about these very high temperatures in Budapest. We don’t have a perfect balance yet so we will have to do a lot of work tonight, but we are getting close, so overall it’s a productive day,” added Alonso.