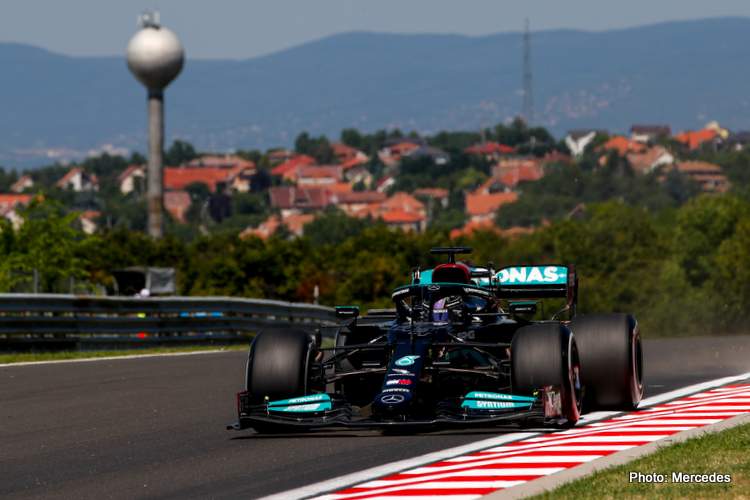 Lewis Hamilton says his weight dropped three kilograms during the first practice day of the 2021 Hungarian Grand Prix weekend, with cockpit temperatures over 60C, on his way to second-fastest time in FP2.

The British Grand Prix winner, seeking an incredible ninth F1 victory at Hungaroring, was narrowly beaten to top spot on the timesheets, at the end of the afternoon session, by Mercedes teammate Valtteri Bottas.

Reporting after a scorching day in Budapest, Hamilton said: “It was roasting today, I’ve probably lost 3kg out there and the tyres were melting!”

With the heat on, Mercedes appeared to have the edge over their rivals Red Bull and, notably for the seven-time F1 World Champion, Max Verstappen was a quarter second adrift.

Hamilton continued: “To see Valtteri and I at the top of the timesheets this afternoon is pleasing, it’s great for the team and we’ll only improve on that. We have some work to do tonight to see how we can finesse the car some more.”

Word in the paddock is after the heat will come to the rain, expectations thus for rain in qualifying may well render today’s hot weather running insignificant.

But Hamilton is not putting his full faith in the weatherman: “You can’t plan for the rain, it’s so unpredictable so you just try and get the car in the best place, understand the tyres, and set the car up for a dry Qualifying and if it rains, it rains.

“I’m optimistic because I definitely think we can improve the car balance-wise and if we can do that, we should be there ready to fight tomorrow and for the race on Sunday,” added Hamilton on a day the Mercs had an edge over their rivals. But it is still too early to presume that is the case.

Last time out, at Silverstone, Hamilton took a large chunk out of Verstappen’s championship points lead, now he trails by eight and will be looking to further close that gap on Sunday.

💬 “It was roasting today, I’ve probably lost 3kg out there and the tyres were melting!” 😅