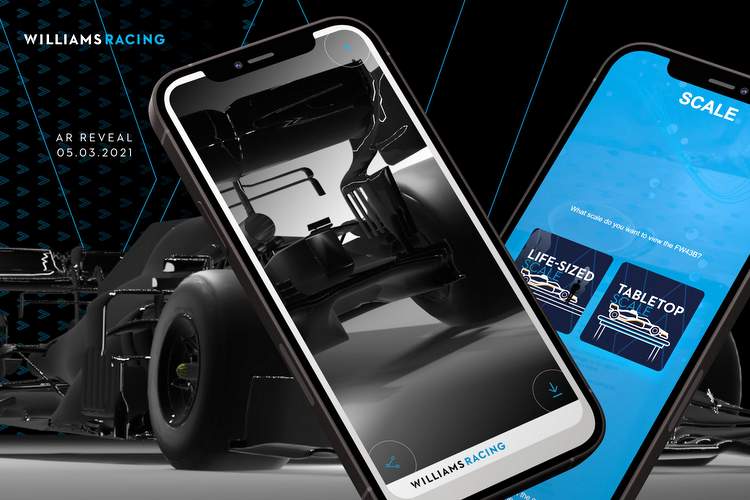 The tale of the intended virtual launch of the Williams FW43B is one of the stranger stories of the 2021 season so far, yet it almost fell off the radar and nearly escaped the collective imagination of the Formula 1 world.

In the midst of the hype during the lead up to the much-anticipated car launches during the pre-season Williams Racing proudly announced that it intended to unveil its 2021 charge online, featuring the exciting novelty of using augmented reality for the prupose.

The team’s press release publicizing the upcoming event trumpeted that “fans across the world [will be] able to get their first look at the new livery using a dedicated app that projects a full-sized 3D model of the FW43B into their homes.”

But something went very wrong and the AR aspect of the event was subsequently cancelled due to a hacking of the app.

“Williams Racing planned to reveal its 2021 challenger, the FW43B, via an augmented reality app later today (5th March). However, sadly, because the app was hacked prior to launch, this will no longer be possible,” said a team statement.

However, given Williams immediate and drastic reaction, could the hypothetical scenario of a thicker plot be possible?

Can you imagine a scenario where an employee had accidentally released a full current revision shelled (hollow) surface CAD model in an unencrypted state to the renderers and consequently lost their job over it?

In that scenario, it would be a reasonable assumption that the FIA would need to write to all of the F1 teams to remind them of their interpretation of the definition of professional espionage.

Likewise, the teams would need to flow down heavily worded memos to their employees reminding them of their ethical obligations.

And imagine how the employer of the dismissed employee would react to seeing screenshots of CFD simulations of their erroneously released model proudly posted on the Linkedin profile pages of budding young engineers wanting to use it as an opportunity to show how smart (or not) they really are to anyone in the industry who might see it.

Why would Williams have bothered to cancel such an expensive and highly publicized event if the CAD renders used in the AR app were benign and not detailed enough to have compromised the IP of the FW43B?

Regardless of what the real reason for the cancellation was, it was a curious episode and in the words of George Russell, “I’ve seen the app and it was going to be an awesome experience for you guys. Whoever did this, seriously not cool.”