Sainz: McLaren one of the most difficult cars to overtake 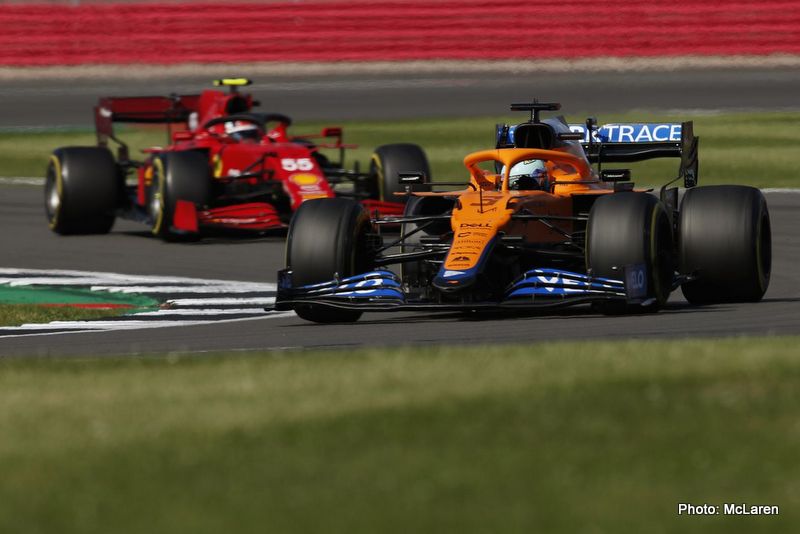 Carlos Sainz believes McLaren have one of the toughest cars on the grid to overtake after being stuck behind Daniel Ricciardo at Silverstone.

The Spaniard finished the British Grand Prix sixth having spent much of the second stint with the MCL35M of Ricciardo in his way.

Sainz left McLaren over the off-season to join Ferrari and has started the 2021 campaign well, picking up a podium at Monaco and sitting seventh in the drivers’ championship.

While Charles Leclerc finished second and showed off the speed of that Ferrari, Sainz was left frustrated at not being able to make more progress.

“Unfortunately, it has happened to me now a few times that stuck behind a McLaren I am not able to pass,” he said. “It’s not news, they have a very strong straightline speed, very strong deployment and power on exit of corners and it is probably one of the most difficult cars to overtake.”

While the McLaren certainly possesses good straightline speed with the Mercedes engine in the back, Sainz also cited the impact dirty air can have on the car looking to make a pass.

“Yeah, unfortunately we were a step behind Ricciardo the whole race,” he added.

“First on the medium, then we actually managed to overcut him with a very strong pace during the cleaner laps but unfortunately after the slow pitstop I had to go behind him again.

“Even though I had DRS I wasn’t close enough to him to try to get him.”