Formula E returns to London for first time since 2016 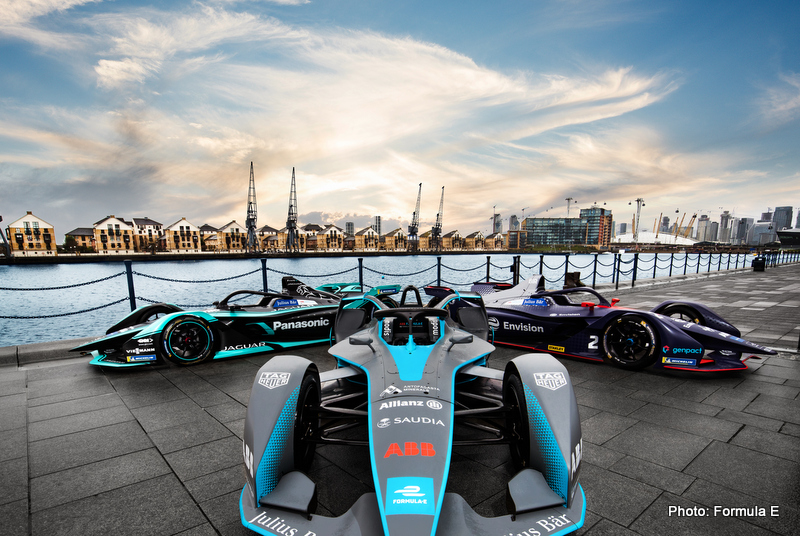 The ABB FIA Formula E World Championship returns this weekend for the 2021 London E-Prix double-header, the first in the city since 2016.

Jaguar Racing’s Sam Bird leads a magnificent seven British drivers (pictured), with Bird flying into the weekend as the World Championship leader after an impressive lights-to-flag victory in the previous round in New York City.

The Net Zero Carbon Championship has a new venue to call home at London’s Royal Docks and a bespoke indoor/outdoor circuit – a world first in international single-seater motorsport.

The race is the first major event at ExCel London, since the venue served London as an NHS Nightingale hospital and COVID-19 vaccination centre.

Seven British drivers set to take the wheel in London
There will be a strong British presence both when the cars line-up on the grid at the ExCeL London and in the garages supporting them.
Seven of the 24 drivers will be competing on home soil this weekend with Sam Bird, Jake Dennis, Alex Lynn, Alexander Sims, Oliver Turvey, Tom Blomqvist and Oliver Rowland all hoping to make it to the top-step of the podium.
Championship leader Bird won his home race in 2015 – one of only two drivers to have ever done so – with the 34-year-old Dorset-based driver also the only one to have recorded victories in every Formula E season to-date.
Meanwhile, two British teams – Jaguar Racing and Envision Virgin Racing – will also be on home turf for the event, whilst both Mahindra Racing and NIO 333 teams feature all-British driver line-ups.
ExCeL to host world first indoor/outdoor motorsport track
The emission free Gen2 cars now have an exciting new venue to call home at London’s Royal Docks and a bespoke indoor/outdoor circuit – a world first in international motorsport.
Designed by British architect Simon Gibbons, in cooperation with the FIA & Motorsport UK, the 1.39-mile circuit features 22-corners and two substantial elevation changes as drivers negotiate incline and decline ramps.
Another cool quirk is that from the air, part of the circuit – a double hairpin section around Turn 10 – also coincidentally maps out a large ‘e’ shape.
Interestingly, this is also the first major event taking place at the ExCeL London venue in the city’s docklands since the location was repurposed as a Nightingale Hospital and Vaccination Centre early on in the pandemic.
And a thrilling reel show ‘This is London Electric’ will kick-off the race broadcast, taking a look back at the spectacular locations Formula E has raced at this season and building excitement to the highly anticipated London double-header.
Channel 4 to broadcast race free-to-air
The London double-header will be broadcast live on Channel 4 from 14:00 BST on Saturday 24 and 13:40 BST on Sunday 25 July.
Vernon Kay will front four hours of coverage over the weekend, with extensive build-up and post-race analysis, and both races will also be available via its on-demand streaming platform All4.
Kay, who has been a part of the Formula E presenting team since 2017, said: “There’s nothing that quite beats the atmosphere of your home race and with seven British drivers to cheer on, the UK fans are going to love tuning in for this amazing weekend of racing. Fans can be sure of close, unpredictable racing on what is set to be a spectacular and unique track.”
Jaguar Racing commit to 2022/23 season
Ahead of its first home E-Prix – British manufacturer Jaguar Land Rover has officially confirmed Jaguar Racing’s long-term commitment to the Gen3 era of the ABB FIA Formula E World Championship – set to commence in the 2022/23 season.
Jaguar Racing’s race-winning motorsport operation will help Jaguar Land Rover develop new sustainable technologies and set new benchmarks in quality with its partners, and support Jaguar’s renaissance as an all-electric luxury brand from 2025.
The Formula E programme will contribute to Jaguar Land Rover’s Reimagine strategy – a commitment to achieve zero tailpipe emissions by 2036, and net zero status across supply chain, operators, and products by 2039.