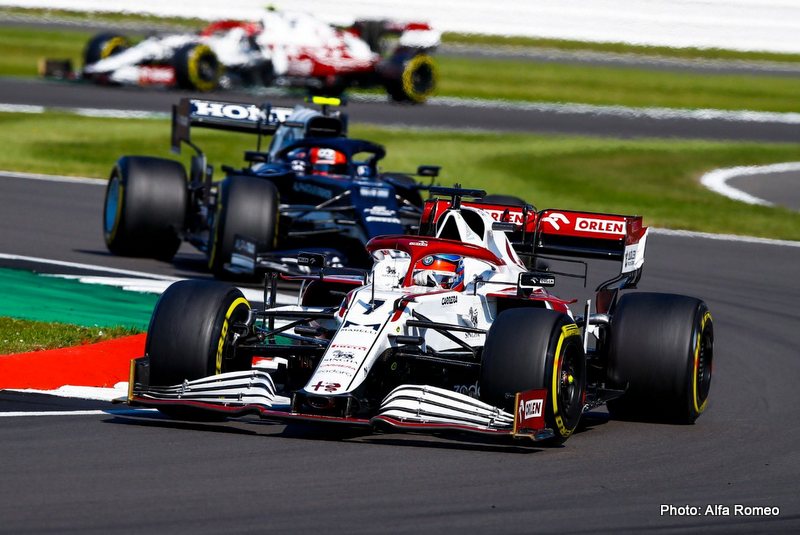 Kimi Raikkonen was left disappointed after the British Grand Prix as he failed to score points once again despite an encouraging race performance.

While the Finn has struggled in qualifying by comparison to his teammate Antonio Giovinazzi so far this season, he has impressed in race trim, making up places on the first lap at a numbers of Grands Prix already.

Raikkonen did just that in both Sprint Qualifying and the Grand Prix at Silverstone, but finished 15th after a late tangle with Red Bull driver Sergio Perez.

The 41-year-old was heard afterwards telling his team to “wake up” over the radio with regards to development and appeared frustrated when speaking to the media.

“We kind of expected it was not going to be an easy race for us here and that’s how it turned out to be,” Raikkonen told Motorsport.com. “After the start we were pretty OK, but the longer we go, the more I’m watching in the mirrors more than forward.

“We tried to fight, but it wasn’t enough here. Maybe at some other track we can be a bit better off, but you know, what can you do?”

Raikkonen has one point to his name so far this season, a record that he is clearly keen on improving on as the campaign nears the halfway point.

“I think over the race we had some battles, and obviously they were a lot faster,” he added. “But I managed to keep him behind quite a long time.

“And in the end we were a couple of corners next to each other and then I was outside the previous corner, inside the next, and I don’t know, maybe he didn’t see me, but I ended up spinning and that’s about it.

“I was OK there and then suddenly he just turned in and then I went. But I’d much rather fight for the position. Finishing 11th or 12th doesn’t really help us.”