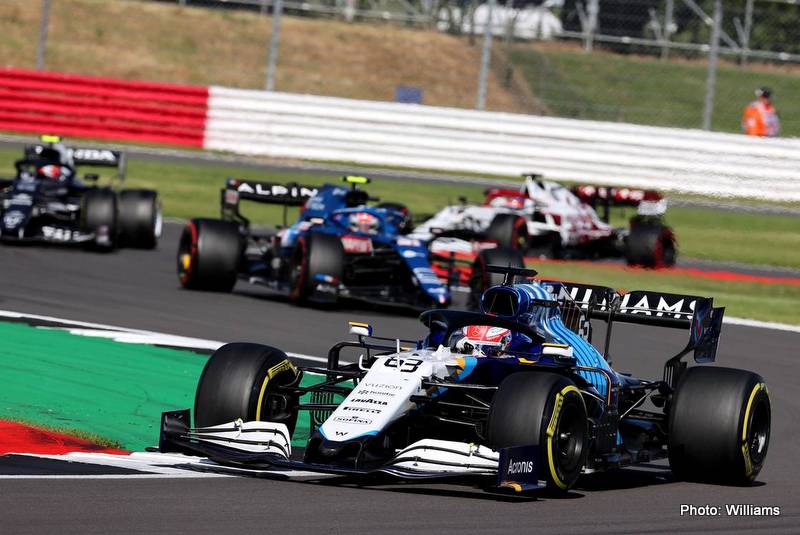 George Russell has picked up a three-place grid penalty following his opening lap collision with Carlos Sainz during Sprint Qualifying for the British Grand Prix at Silverstone.

After securing an incredible eighth place in qualifying, Russell and Sainz tangled coming out of Brooklands on lap one of the inaugural sprint session, with the Spaniard losing numerous places as a result.

The incident was investigated during Sprint Qualifying, before the race director confirmed it would be looked at further after the conclusion of the session.

Sainz was able to recover to finish 11th, while Russell held on to ninth, but will now start Sunday’s Grand Prix from 12th.

The stewards ruling said: “Cars 63 [Russell] and 55 [Sainz] approached turn 6 with Car 63 on the inside, in the middle of the track, and Car 55 on the outside. Car 63 locked the front brakes briefly and then understeered towards the edge of the track at the exit of the turn and contacted Car 55, which was forced off the circuit and on to the grass. Car 63 is judged at fault for the incident.”

The grid drop delivers a blow to the 23-year-old’s hopes of scoring points and he described the decision as “harsh”.

“It is very unfortunate to get a penalty and I feel that it was a harsh decision,” Russell said. “We are still going to be starting in a great position to fight for points tomorrow.

“We had a really strong race today; it is going to be long race and tyre management will be key, which will be the overriding factor into the result. So, let’s wait and see!”

George Russell has been given a three-place grid penalty for his role in his incident with Carlos Sainz at Turn 6 during #F1Sprint #BritishGP 🇬🇧 #F1 pic.twitter.com/2X5U4v49rJ