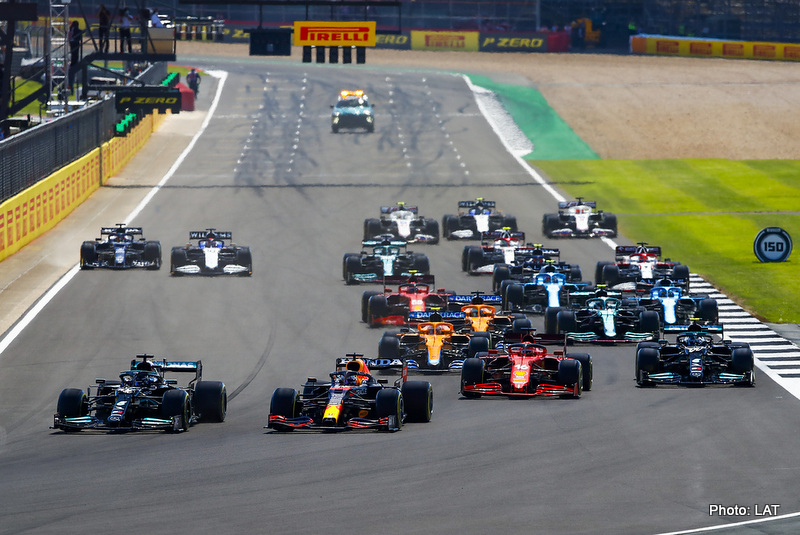 Lewis Hamilton secured his 99th victory during an explosive British Grand Prix – the eighth Silverstone win of his career.

Let’s crunch the numbers and see what really went on in Silverstone.

Below I have assembled “Best Case Race Pace” for the British Grand Prix. I have extracted the best lap of each driver for laps between 6-10, 11-15…….65-71. Laps 1-5 have been ignored due to the Safety Car period for Max Verstappen’s crash on the opening lap. 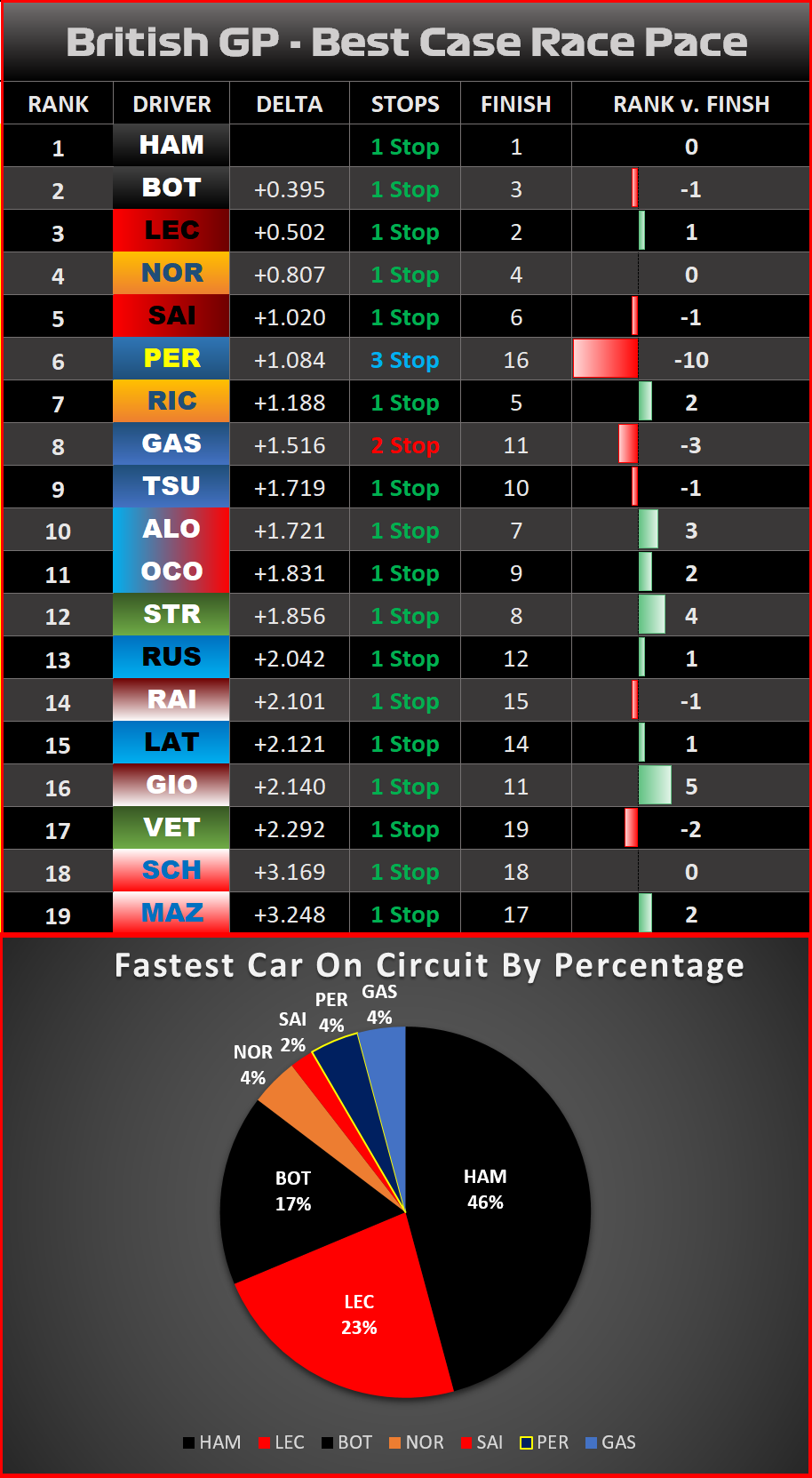 Unfortunately, with Max Verstappen not completing a single lap, it ends a string of highly interesting comparisons to Hamilton. Using the sprint race as a measuring stick, it was clear Mercedes were once again just a step behind of the overwhelming pace from Verstappen in his Red Bull fighter.

We are left to admire Charles Leclerc’s race, punching well above the current Ferrari’s spec weight class. Much to Leclerc’s credit, he led 50 laps, and was the fastest car 11 of the 48 available laps for comparison or 23% of the race. Even more impressive, Leclerc spent much of the early phase of the race managing an engine issue over the radio along with the team. The result is the ultra-quick Monegasque finished second position, splitting the Mercedes pair in half.

Lewis Hamilton by comparison led only two laps, was the fastest car on the circuit 48% of the race and overcame an early 10 second penalty to win the race much to the appreciation of his home fans. He delivered the fastest pit in-lap at the first pit stop cycle among all drivers, a tenth better than Leclerc and six tenths faster than his teammate Valtteri Bottas.

Bottas spent 18 laps starring at the rear wing of the McLaren of Lando Norris after getting jumped on the Verstappen red flag restart for third position. Lando would go on to have a slow pit stop resulting in Bottas jumping back ahead. From there Bottas was never really pressured by Norris, but never put pressure on Leclerc either. On lap 40 of 52 while in second position, Valtteri was given a team instruction to yield his position to Hamilton in turn 15. Bottas was on average the second quickest car on the circuit, four tenths behind Hamilton, although getting stuck behind Norris for as long as he was ultimately put him out of reach of Leclerc.

A strong run of performances came to an abrupt end in Silverstone for Red Bull as a whole. While Verstappen’s incident will be debated from now until the run up to the Hungary GP in two weeks, circumstances have been such that Sergio Perez has quietly gotten away with among the worst performances of his career.

Perez qualified fifth on Friday, one position behind Leclerc after losing his fastest lap to a track infringement penalty. He then went on to spin during the sprint race ultimately resulting in being shown as the last place qualifier.

During Sunday’s race, Perez put in an inexcusable performance unable to fight back to a respectful finish. On lap 47 Perez sat 10th in the running order and 11 seconds behind ninth place Alpine driver Esteban Ocon’s. Red Bull instead elected to pit Perez on lap 48 and attempt to steal the fastest lap extra point away from Hamilton which was successfully executed by Mexican on lap 50.

Perez showed only sixth fastest of all drivers, it would have been seventh had Verstappen not exited the race. Perez was the quickest car on circuit for only two laps, and that’s only really down to the late race pit stop to attempt the fastest lap.

The result is Red Bull loses 40 points across the weekend now only four points ahead of Mercedes. Verstappen sees his mammoth 33 points lead after yesterday’s sprint race slashed to only eight points ahead of Hamilton. Perez was also jumped by both Norris and Bottas on his tumble from third to fifth in the championship. 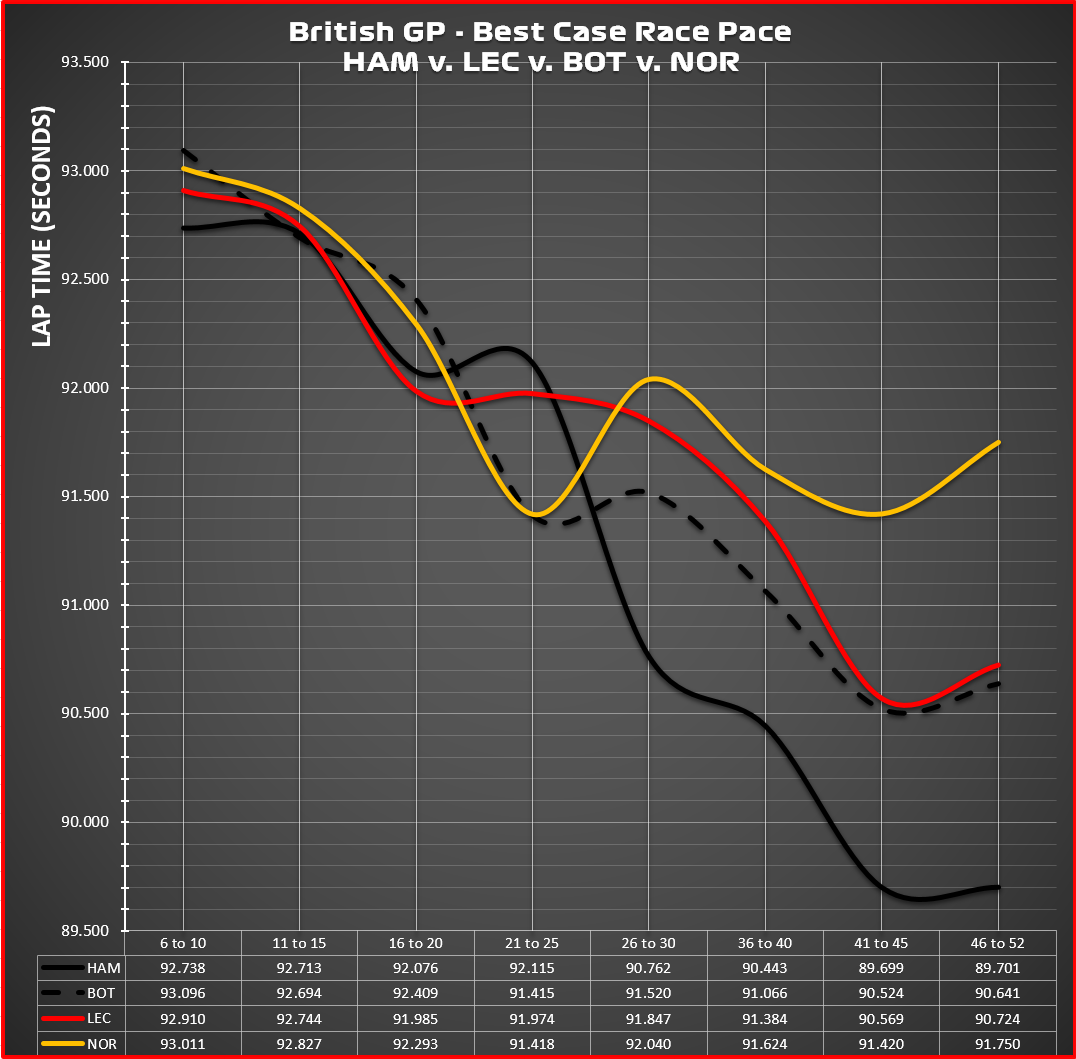 With Charles Leclerc standing out this weekend, the best of the rest is Lando Norris.

The McLaren vs Ferrari championship has been remarkable. McLaren stood out during the Austrian double but Leclerc returning fire this weekend was sensational.

The net result sees Ferrari pull five points back off of McLaren to gap of 15 points. While Norris continues a remarkable season of solid finishes, it was Daniel Ricciardo finding his feet and delivering a strong finish just behind his young British teammate while Carlos Sainz chased both McLaren’s home on route to a sixth place finish.

The third group of championship contenders; AlphaTauri, Aston Martin and Alpine duked it out for the final points paying positions.

Alpine’s highly successful double points paying finish helped get them closer to their rivals as the three teams are now only separated by nine points. 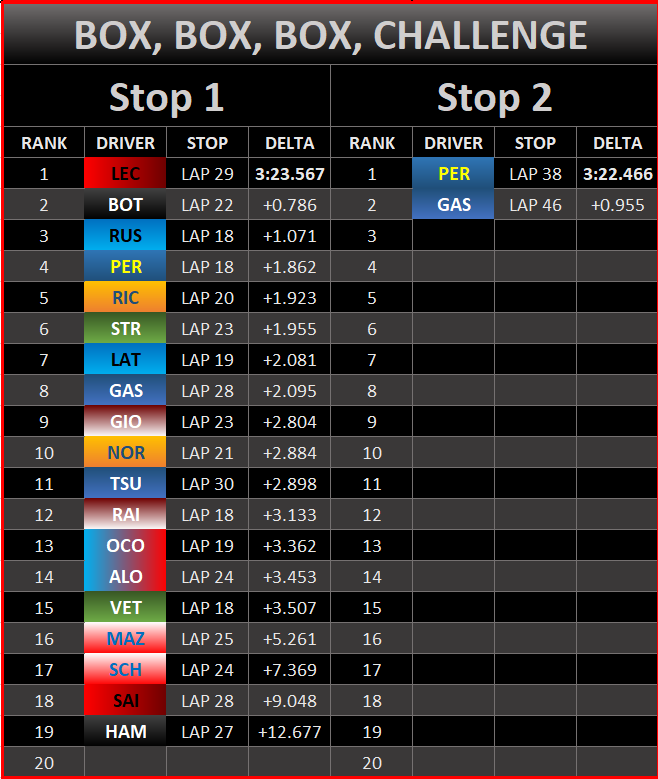 #1 Nikita Mazepin finished ahead of his popular teammate Mick Schumacher for the second time this season.

#2 Lando Norris is third in the world drivers’ championship. 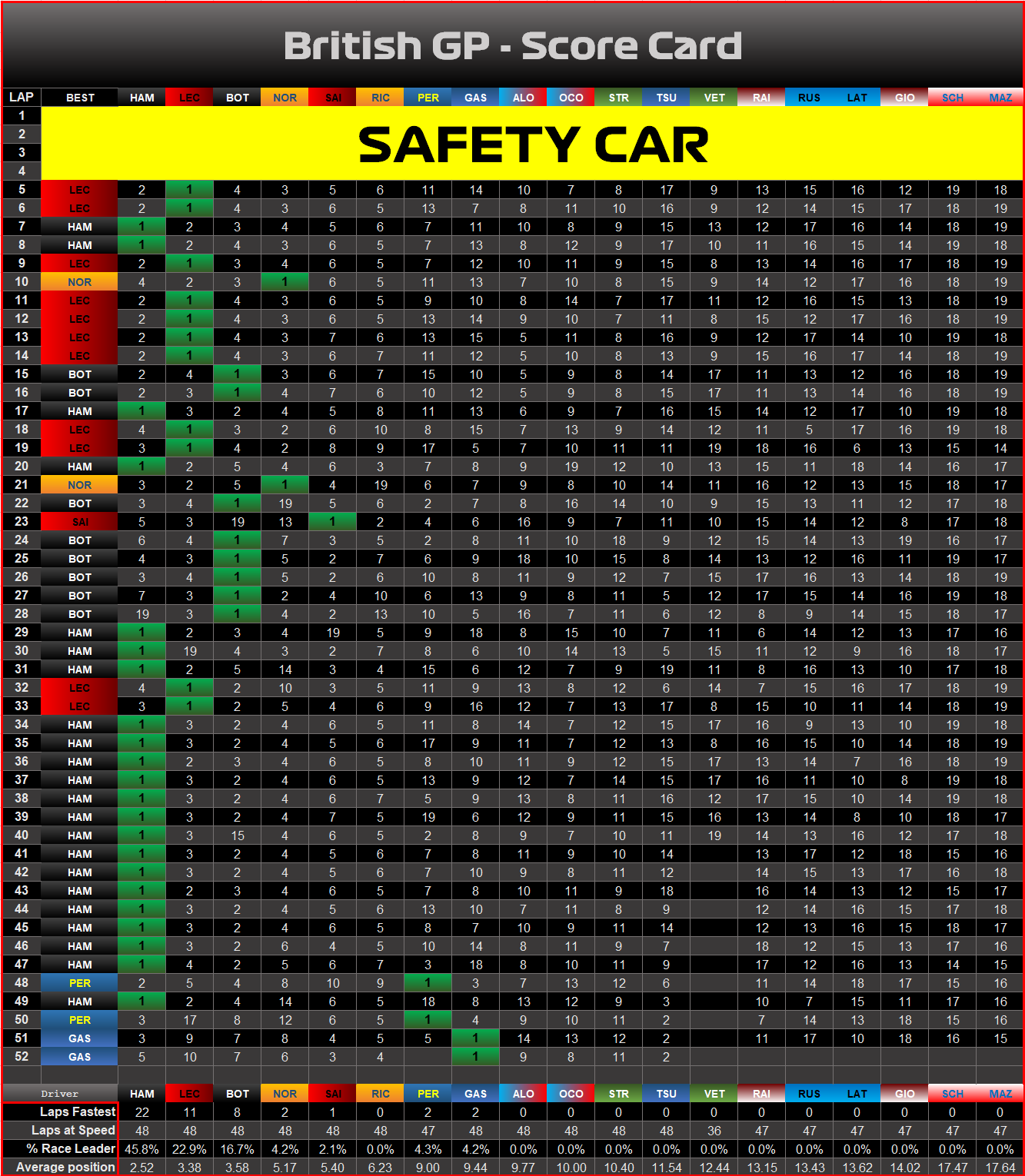