Alonso: I think the first lap was one of my best 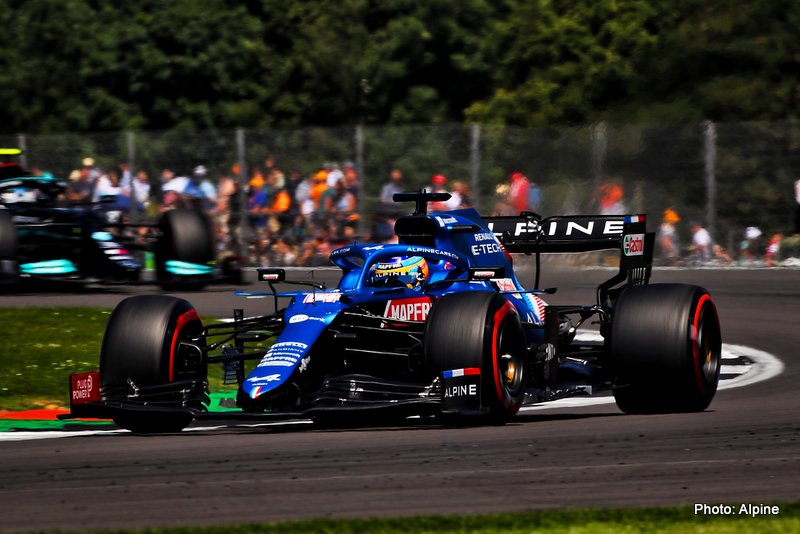 Fernando Alonso believes that his first lap during Sprint Qualifying ahead of the British Grand Prix was one of the best of his career.

The Spaniard was starting 11th after qualifying on Friday, but was able to gain six places off the line thanks to one of his signature slingshot launches.

Up in fifth, Alonso clearly did not have the pace in his Alpine to hold on too long, but was able to frustrate Lando Norris and Daniel Ricciardo for a while, although both managed to get past eventually.

The Spaniard then held on to seventh, keeping Sebastian Vettel at bay in the closing stages.

“I think the first lap was one of my best,” Alonso said afterwards.

“I know there are a lot of first laps before now that are considered good ones – especially in the Renault days with very good starts – but this one was not only the start into turn one, it was turn three, turn four, six, nine. So it was a more complete lap.

“I guess if you are fighting for the championship, I will not make those manoeuvres because there is more to lose than to gain. But we are in a position that we can take maybe more risk and benefit also from the red tyres’ first lap performance.

“We were maybe a little bit out of position because we were not the fifth-quickest out there and then we had to fight a little bit with the McLarens. Then we gave up the fight, in a way, because they were too fast and we concentrated with Sebastian and P7 is better than P11, which is what we achieved yesterday.”

Alonso was given a warning for moving in the braking zone by race director Michael Masi, an allegation that he disputed.

“I was surprised, I never move under braking,” he added. I was moving at the beginning of the straight.

“But I don’t care, to be honest. I have been on the other side for now, nine races. It’s going to be the same for the remaining of the year. I will be on the dark side this time,” Alonso concluded.

He’s pretty good at these race starts, isn’t he? 🚀@alo_oficial absolutely aces it at lights out in the F1 Sprint #BritishGP 🇬🇧 #F1 pic.twitter.com/RpA4JnDr1v