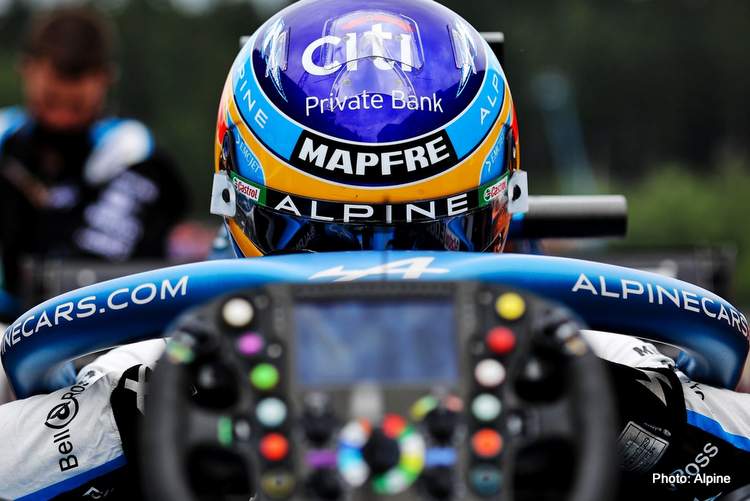 Fernando Alonso’s return to Formula 1 has not been helped by having to toil in the only-just-good-enough-for-midfield Alpine, something he accepts this season because his focus is firmly on 2022.

Next year, of course, the new F1 regulations kick which (hopefully) levels the playing field for the teams that have been chasing Mercedes and now Red Bull for over a decade.

The new sport’s new era – 2022 – is what tempted the double F1 World Champion to return to the top flight, and told Marca he has no regrets: “I’m happy with my return to F1 and the difficulties are part of the learning curve I set out to on in 2021.

“When will we have the opportunity to win, or to be closer to the best? If we do things well, it will be in 2022. In 2021, when I signed for Renault [now Alpine] I knew that we would be fighting to get into Q3 when possible

“Then after the first races and people at home think we’re going be on the podium, which was not well reported because whenever I spoke since I signed last year, it was always 2021 for learning and building the team in preparation for 2022. And then, well, let’s see how things turn out

“My return was always linked to the new 2022 regulations. For 2021 I never had a clear goal, I wanted to get used to F1 again, enjoy it and that’s what I did at the start of the season but without a clear goal of finishing the eighth, or the fifth; or twelfth or whatever.”

Stats he acknowledged during the interview: “We were Champions twice, runners-up another four; and in three of them by less than three points. So, well, apart from being two-time champions, I think I’ve been a title contender for five or six years until the last race.

“And in that last race maybe on lap 20, on 40 or on lap 50 we were virtual leaders of the world championship. So I am proud of that. We do not give up, and we fight to always be in the mix,” recalled Alonso.

Fast forward to this season, Alpine are out of podium contention this year, depending on Alonso’s experience and racecraft to make the most of what they have in the A521. Meanwhile, the F1 spotlight is shining brightly on the battle between his former nemesis and teammate Lewis Hamilton and heir apparent Max Verstappen.

Alonso weighed in on the contest for this year’s title battle between Mercedes and Red Bull: “If we were to call a favourite now, it would surely be Verstappen. But the two are very even and it is clear that the world championship will be between them.

“What happens will depend on what Mercedes can bring to the battle in next races and what Red Bull can deliver for their drivers but it will be more competitive; it won’t be a Mercedes cruise and it should be very close until the end.

“Verstappen is spectacular and I enjoy watching him, drivers like that always offer you something extra and those are the ones you want to cheer for and hope things go well for them.”

But the age gap does not concern the veteran of 320 Grand Prix starts: “From the outside, too much is made about a driver’s age. This year it’s exaggerated, the questions that I have had to answer about age and the topics that I have had to listen to are at times totally excessive.

“Throughout my entire career, it’s been the other way around. In every category, I was always younger than my rivals. And lately, when I went to the Indy or the Dakar –  I was one of the youngest…

“Throughout my life, I have answered questions about age. Now, F1 is what it is, it is very media-driven, and you have to talk a little about everything. Also about age but in motorsport where we have the stopwatch to judge and that does not lie. If not, there would only be young drivers here. It would be like karting with 12- or 16-year-olds.,” declared Alonso.