Ferrucci: I am definitely not in a position to be crashing cars 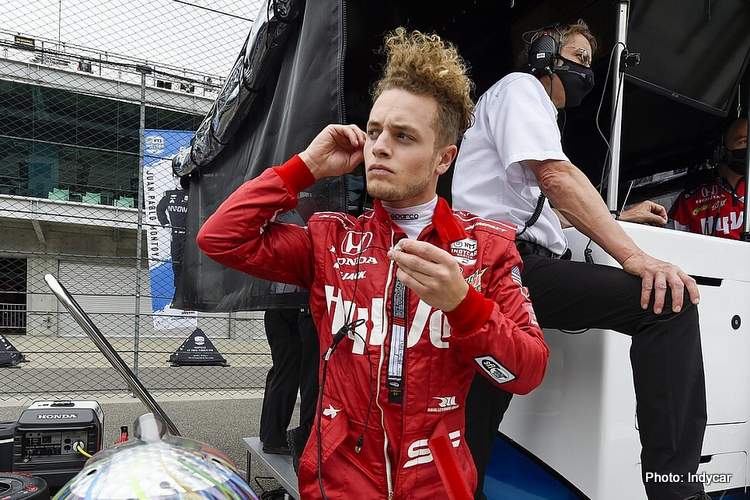 Santino Ferrucci wants to race, in NASCAR and IndyCar or anywhere he can get a seat but he agrees with Graham Rahal, who a week ago said Ferrucci must stop crashing in IndyCar to be considered for a long-term addition at Rahal Letterman Lanigan.

“He’s right, I am definitely not in position to be crashing cars,” Ferrucci told The Associated Press. “But in my entire IndyCar career, I’d never had a major crash before this season. I’ve had front wing damage, but nothing like this. But both crashes, I know what I did wrong — I was pushing too hard trying to prove that I deserve to be in that car.”

Ferrucci’s first of two crashes was in a practice session ahead of the Indianapolis 500. The 23-year-old American cracked the fibula in his left leg and although he still wears a brace, he visited the Toyota Performance Center in North Carolina this week to work with a physical therapist.

The injury might have healed faster, Ferrucci said, had he not crashed again during qualifying ahead of the second race in the Detroit doubleheader. The RLL team had under two hours to repair the car in an all-hands-on-deck rush to get Ferrucci to the starting grid.

Rahal told AP two of his mechanics almost didn’t make it to his car for the race because of heat exhaustion from rebuilding Ferrucci’s car.

“I’m not trying to be hard on the guy, I spoke highly about him to my dad and he takes a lot of chances and on ovals in the past, his chances have worked out,” Rahal said.

“He’s brave. But from a technical standpoint, the team needs to move forward. Both crashes were driver error, and that’s fine, too, that happens and I’ve done it a million times.

“But sometimes you need to leave something on the table because you need to get to the race. You need to make sure you’re in one piece. He’s just got to be smart.”

Despite the crashes, Ferrucci salvaged his four IndyCar races with RLL this season with four top-10 finishes. His sixth-place finish in the Indy 500 was higher than both RLL teammates Rahal and defending race winner Takuma Sato, and he showed enough that sponsor HyVee added three more races after the initial Indianapolis debut.

Next up for Ferrucci is a NASCAR weekend and his sixth Xfinity Series start Saturday at Atlanta Motor Speedway. He has a partial deal with Sam Hunt Racing but no available sponsorship for any races after Atlanta.

Ferrucci finished on the lead lap in four of his five races — he was two laps down in his NASCAR debut in February at Homestead — and has been 15th or higher in the ensuing races.

He’s had to learn the stock car and NASCAR nuances in real-time because COVID-19 regulations have scrapped practice and qualifying from the weekend schedule.

“It’s really hard to do this without any track time. Every single one of my laps in NASCAR has been race laps,” he said.

Atlanta, though, is the first track Ferrucci will be racing for the second time. He finished 15th there in March and expects the 251 miles of experience will give him a solid foundation for Saturday.

But after that, there is nothing on Ferrucci’s schedule the rest of the year. He wants more races in both series but needs either supermarket chain HyVee to greenlight him with RLL in IndyCar — Ferrucci really wants to run the inaugural street race through downtown Nashville in August — or funding to come through to drive more races for Hunt in NASCAR.

“I want to be in top competitive equipment,” said Ferrucci, who drove 35 races over three seasons for Dale Coyne Racing and finished fourth in the 2020 Indianapolis 500 in the Coyne entry that is led by Jimmy Vasser and James Sullivan.

Ferrucci’s goal is to find a full-time ride in either series and hopefully still compete outside of those demands. If he landed a full-time Xfinity ride, for example, he’d still try to race the Indy 500. And if he landed a full IndyCar ride, Ferrucci said he’d want to work with Hunt in the Xfinity Series on off weekends.

“I want to be racing and I want to be in a full-time effort with the opportunity to put up consistent results,” Ferrucci said. “Wherever that takes me, I still want to be able to race in both NASCAR and IndyCar.” (Report by Jenna Fryer)