Indycar Mid-Ohio: First win of 2021 for Newgarden and Penske 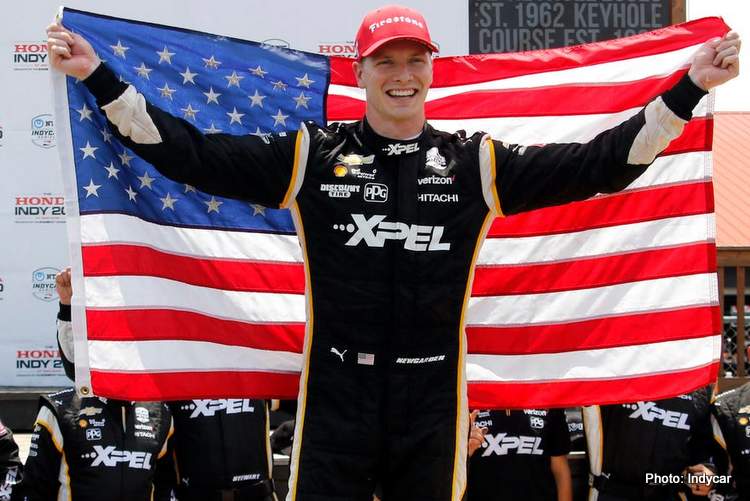 Josef Newgarden was determined to fight through a pair of devastating losses without pointing fingers, bemoaning his bad luck or giving up on his team.

He won’t deny that Team Penske was winless and Newgarden had lost two races after leading 99 of 125 laps in the two Indycar races events prior to Sunday at Mid-Ohio Sports Car Course. But he knew it wasn’t because the No. 2 Chevrolet team wasn’t performing.

To prove it, he went out and once again dominated. And this time, there was no late yellow flag to ruin his race.

Newgarden at last earned an overdue first win of the season by leading all but seven of the 80 laps at Mid-Ohio. The win was the first this year for Team Penske, and came a day after Roger Penske was presented with a commemorative trophy to mark the 50th anniversary of Mark Donohue’s first win for the organization.

It was a statement from Newgarden in that back-to-back losses in races he dominated did not break him.

“I struggled a lot at the beginning. I’ve been in tough situations in this paddock, just trying to fight to understand as far as a driver (without) a lot of direction,” Newgarden said.

“It’s definitely given me great perspective. All the situations I’ve been in have just added to perspective for me on how this series works, how to execute at a very high level in professional sports, what it takes.”

The race could have been a third consecutive defeat had Newgarden not heard “an audible vibration” in his engine on the final lap of Saturday warmup. It concerned him enough to alert his team and the engine was changed before Sunday’s race.

But this team knew its worth, said Penske president and Newgarden strategist Tim Cindric.

The team had, after all, won three consecutive poles, led 83.9% laps over three races, and snapped the Penske slump. The last time the Penske organization went this late in the year without a victory was its 1999 winless season.

“We don’t typically panic,” Cindric said. “The speed, everything is there. We’ve led so many laps, it’s ridiculous to have not had a win.”

Team Penske on Saturday marked the 50th anniversary of its first IndyCar win, with Mark Donohue at Pocono, and celebrated by presenting Roger Penske with a commemorative trophy of Donohue’s victory shaped as Pocono’s “Tricky Triangle” with th e original program covers, ticket, parking pass and other memorabilia worked into the design.

Penske was one of the first to greet Newgarden in victory lane, where Newgarden celebrated his 19th victory — an IndyCar record for an American driver.

The record meant little, tough, because Newgarden wants to be the best of all the IndyCar drivers from all different countries.

“The great thing about IndyCar racing is we tend to attract the best of the best from around the world. If we didn’t have that, I don’t think it would be special to be an American in this championship,” Newgarden said.

“You’re competing against the best in the world. Scott Dixon, people from all across Europe, Takuma Sato from Japan. If these people weren’t in this sport, it wouldn’t mean as much.

“I’m proud to be an American. It’s an eclectic group, the best of the best. You want to be the outright best, regardless of your nationality.”

The win cut Newgarden’s deficit in the standings to 69 points behind Alex Palou, who finished third. It was Palou’s sixth podium in 10 races, and the Spaniard has two wins and has finished lower than seventh only twice.

Palou pushed his lead in the championship race to 39 points over Pato O’Ward.

There are six races remaining for Palou to hang on in his second IndyCar season, first with Chip Ganassi Racing. His challengers include former champions Newgarden and his own teammate, six-time and reigning champion Dixon. Palou is 56 points up over Dixon and Newgarden is fourth.

“We’re going to win this championship just by being here every weekend, getting some more wins,” Palou said.

Newgarden knows he’s got to win a lot of races to close the year, and said Palou is the biggest threat of the crop of four young drivers who have taken the series by storm this season. Palou at 24 is the oldest of the four and newest to IndyCar.

The Mid-Ohio winner said: “I would give him the highest marks of all the young guys. I think he’s the most complete.

“You look at the young crop — there’s some serious talent in this series from top to bottom, whether it’s young or the middle guys or old guys, but amongst the newcomers and the young generation, he looks to be the full package,” added Newgarden. (Report by Jenna Fryer) 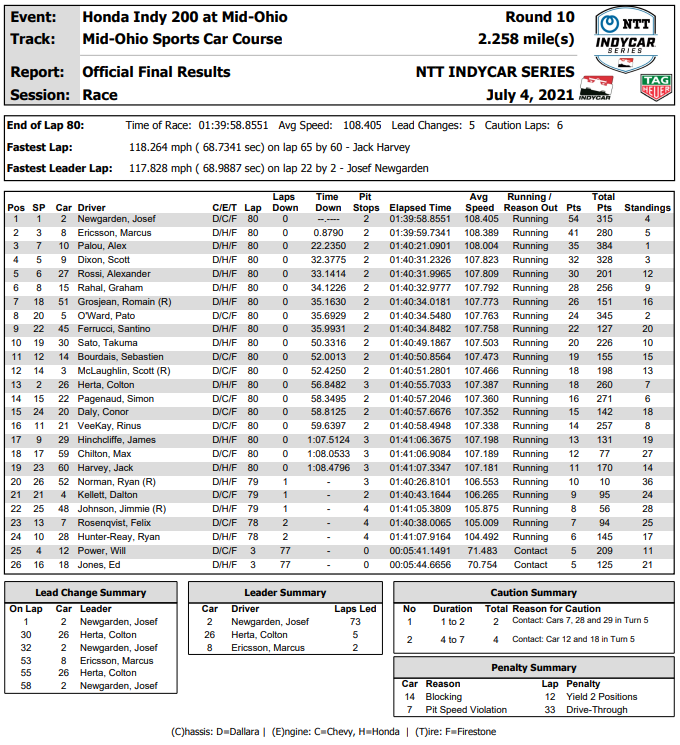