In the Pit Lane: Lando Norris bucks the trend 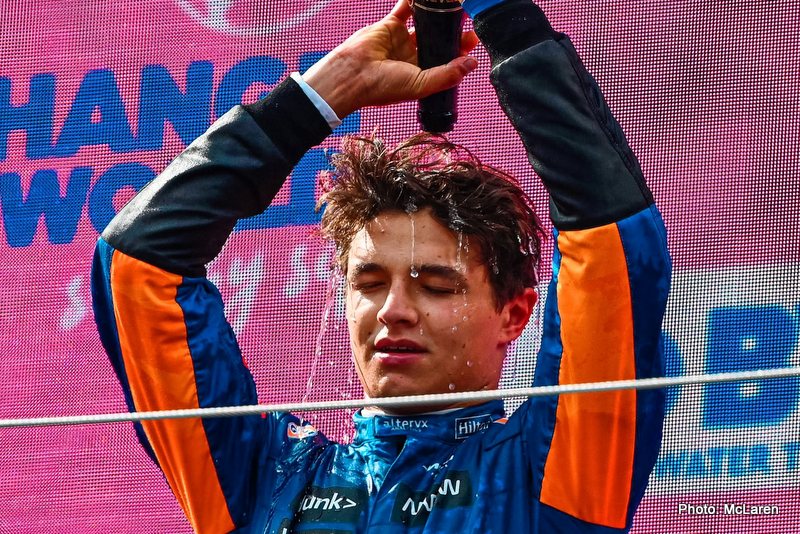 Lando Norris continued his impressive season with a podium in Austria, leaving his expensive teammate Daniel Ricciardo scratching his head.

Norris owes much of his success to his father’s deep pockets. Formula 1 has a trio of billionaire fathers backing their sons to various degrees of success namely Lawrence Stroll, Michael Latifi, and Dimitry Mazepin.

The debate on a father paying for a race seat goes along the lines of is it fair or right that the sons concerned get the drive regardless of talent compared to other drivers who get a drive and financial backing due to talent.

Well, Norris may be bucking the trend. Norris is a pay driver, a fact not often publicized, but his millionaire father has coughed up $44m to date to ensure Jnr’s racing career.

The good news for Norris and McLaren is that the kid has the talent witnessed by multiple karting championships, a F3 championship, and now top 10 finishes in F1.

His dad Adam Norris made his fortune as a founder of stockbroking firm Hargreaves Landsdown and is believed to be sitting on a $200m cash pile.

He first got the chequebook out at McLaren through his Horatio Investments fund back in 2017 to secure Lando’s role as test driver.

Lando was upgraded to reserve driver in 2018 before landing the coveted race seat in 2019 in a three-year deal costing Snr $12m a year.

The difference from say Latifi is McLaren knew Norris was potentially the real deal, so it was a win-win for the team.

This year it was announced Lando had signed a three-year deal but not before Norris Snr had got the chequebook out again this time paying $5m a year.

Norris Snr knew McLaren had the upper hand as they could provide a competitive car unlike other teams who would welcome his cash and so he went in for a penny in for $59m.

McLaren again scored a win-win with Norris agreeing to pay the cash-strapped team the three-year cost of $15m upfront.

Lando has always rather naively played down his father’s cash stating: “I don’t really like to talk about it, but compared to Lance Stroll my father is not nearly as wealthy.”

For the Norris family, it’s worth spending big bucks matching the talent to a competitive team and avoiding the scenario that is Williams or Haas.

At Williams, Nicholas Latifi brings a staggering $30m to the team in the shape of both his father’s money and sponsorship from Royal Bank of Canada and coffee giant Lavazza.

It does beg the question if Russell goes to Mercedes will Adams write a bigger cheque to secure the race seat for Nissany in 2022?

At Haas, Mazepin Snr is backing Nikita by providing Gene Haas with $12m of sponsorship and a ‘contribution’ of $8m in what may be a ‘try before you buy’ deal.

For Mick Schumacher, the German communications company 1&1 pay $12m in sponsorship but with the caveat, Mick gets the drive.

The Schumacher family stump up another $6m. The reality is Haas bank $18m and Mick gets to trail around at the back of the grid.

Hamilton did not have a rich father, but Anthony Hamilton held down three jobs and spent every penny he had on his son’s racing career.

So, the F1 world was surprised at the very public falling out in 2010 when Lewis sacked Hamilton Snr as his manager.

Questions were asked of Lewis’ loyalty but as with most events F1-related it was about money.

Hamilton lost the bulk of his newly earned millions when Anthony got on the wrong end of a land deal in Grenada waving goodbye to $20m of his son’s money.

So, the debate will continue on pay drivers which also include drivers who bring sponsorship money to the table, but the crucial difference is for these drivers’ talent was paramount in securing the funding.

Garry Sloan is an author, columnist, and podcaster more details at garrysloan.com