Inside Line: Logical for Hamilton, Mercedes and Formula 1 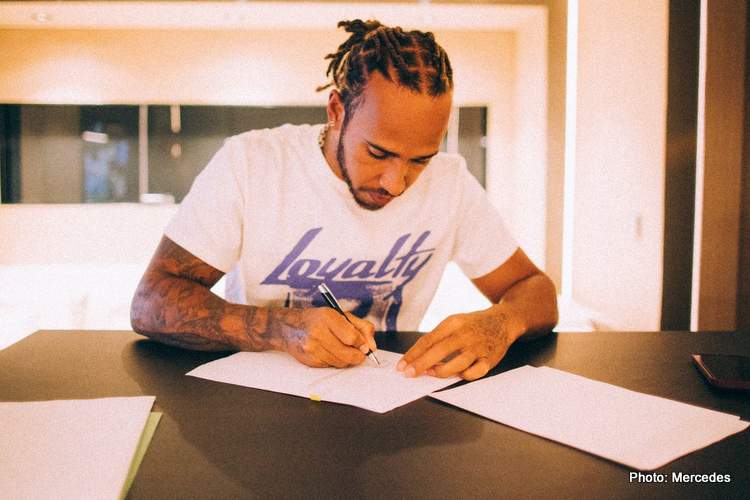 This morning I switched on my computer at 10:30 am, at 10:32 the Mercedes email popped up confirming a two-year extension to Lewis Hamilton’s contract, ending speculation he might quit this year.

It also marks the logical continuation to the most successful Formula 1 driver/team combo in the history of our sport. While there was little doubt he would continue, the news came earlier than expected, and from my side, it was a no-brainer for both team and driver.

Hamilton is still the man to beat of this generation, his 98 victories a testament to that as he seeks an unprecedented eighth title. For Mercedes, he still ticks every box as a driver at his peak.

His every move launches headlines, while on track he continually rises to challenges from a posse of incredible Young Guns at the pinnacle of the sport; his title battle this year with Red Bull’s Max Verstappen is proving to be one for the ages.

He is much, much more than a very, very good racing driver, Lewis is the box-office material and which transcends beyond the world of F1.

Furthermore Hamilton’s allegiance to the Mercedes brand, he has only driven tri-star badged cars in his 274 Grand Prix starts, has huge commercial value, as spin-doctors in Stuttgart have testified – the extension is the cherry on the cake for an incredible partnership.

We’re delighted to confirm that @LewisHamilton has signed a contract extension that will keep him with the Team until at least 2023!

The big question now is: who will be Sir Lewis Hamilton’s teammate?

From where I sit, Valtteri Bottas is driving like a driver who may be out of a job, as someone leaked info claiming the George Russell has been done for 2022, and two British drivers will spearhead the UK based German team.

While English media are lobbying strongly for the Russell-Hamilton pairing, this would be harmony suicide by the World Champions because Valtteri Bottas has fulfilled the role as number two to allow his teammate to claim the accolades.

There has seldom been a more successful teammate and harmonious (!!!) partnership than HAM-BOT so why break up a winning team?

If Bottas is to remain, expect it to be confirmed within the next few days. After this latest development, the longer it takes for them to now confirm the Finn, the greater the chances are Russell is the new man.

Which in turn, would suggest Bottas advocate, Hamilton has agreed to a new teammate as a trade-off for keeping his salary at around $50-million or whatever he banks…

This is pure speculation, whatever the case we have Sir Lewis Hamilton with us until the end of 2023 at least. With this in mind our GP247 WhatsApp group went into overdrive, upon which I requested reaction to the news from our crew:

Will Dodds: “Hamilton signing on for two more years is great news for Mercedes and Formula 1. He has shown no signs of slowing down this season and his battle with Max Verstappen so far has been blockbuster stuff. As long as Hamilton can cut it at the top level and wants to continue, all the power to him.”

Agnes Carlier: “As an F1 fan, I’m excited that Lewis extended his contract for an additional two years. The reigning World Champion is a perfect example of someone who built his life bit by bit. Starting young, daring to approach Ron Dennis which sealed his future. Lewis is trying to do his best at the right pace but for the Champion it’s never enough and no limits to improvements he makes. Lewis also takes on the challenges and opportunities. Lewis was patient and waited and worked hard.”

Jad Mallak: “Seems to be the logical decision for both parties to make. Lewis still shows that he’s in top form, and to be honest, no other driver except for Max Verstappen can realistically be a contender for that seat. But Max seems tied down long term with Red Bull especially if he wins this year’s championship.

“With the new rules set to kick in next year, Lewis’s experience will be a great asset. The two years duration gives a chance for both parties to assess their long-term future options.”

Mark Kay: “The agreement of a new contract at this moment in time seems like a very smart and measured move on Mercedes behalf. As Formula 1 moves into a new era teams will require technical experience and leadership as the development of new designs intensify during the 2022 season and in retaining Lewis, Mercedes have undoubtedly secured the most capable and experienced driver available to do so. Lewis will be a critical factor in the technical strategic direction the ground effects era Mercedes F1 will take. However, in the more socially conscious times we live in Mercedes have also ensured they maintain that message in Lewis who has concerns and a voice about what is happening in the world outside of F1.”

Darren Buckner (SIMRACE247 Editor): “With Lewis Hamilton being a great success in Formula 1, there is no doubt he has helped with the sport moving into the modern era. However, with that being said his involvement to remain at one team for many years bringing great achievements makes me feel that he could have been far more widely respected if he had selected another team to help with development and progression. I think it is a great move for AMG to have Lewis, but for Lewis himself, I would have liked to have seen him move to another team. Imagine seeing Williams back at the front again as an example with Lewis at the wheel, developing and moulding a team as they rise.”

Kevin Melro: “Having been privileged to attend Lewis Hamilton’s first-ever race in Australia 2007, his career that has followed has been a mesmerizing experience in every aspect. If the horror this one man has brought upon his rival drivers and teams were to be made into a movie, it would be called “The Lewis Hamilton Grand Prix Massacre”. The current allure of F1 is the potential of Max Verstappen stealing Hamilton’s throne. Lewis subjecting himself to a group of these amazingly strong current drivers as uncertainty lays ahead with a new spec of race car for two more years is unquestionably admirable from Lewis, it should be appreciated by the F1 community, and all fans too. The short term future looks bright for F1 with Hamilton’s continued involvement.”

💬 “We are relishing the battle we have on our hands this year – and that’s why we also wanted to agree this contract early, so we have no distractions from the competition on track. ” – Toto