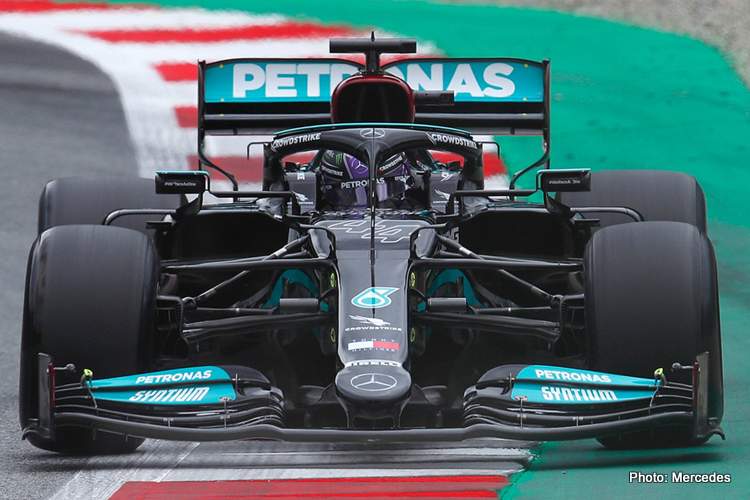 Red Bull-owned the first three days of action at their home track, but on day four Mercedes reclaimed the upper hand in the to-and-fro Formula 1 world title battle between the sport’s current top two teams and Toto Wolff says there is more to come from his team.

Weather? Softer Pirelli tyres,? Wake-up call? Update? No update? Whatever the case Mercedes ended day one fastest of all with a two-tenths margin over chaser-in-chief Max Verstappen.

Which is quite some feast considering a week ago this time they were scratching their heads trying to figure out how Red Bull had a half-second or so gap to them at a venue they dominated at in the past.

While it’s only Friday, Mercedes have got off to the kind of start we are used to them having, topping the FP2 timing screens one-two, Valtteri Bottas 0.189s shy of Hamilton’s best effort of 1.04.523s.

Speaking to Sky F1 after the afternoon session, Wolff said he was “carefully optimistic” after “improvements in some of the corner sequences, so it’s encouraging.

Hamilton’s time was 1.2 seconds quicker than his FP2 time last Friday, in comparison, Verstappen was only a quarter-second faster than he was seven days ago at the Red Bull Ring.

Defeats in recent races have hurt Mercedes as they trail in the standings in both drivers’ and constructors’ championships for the first time in almost a decade. Mixed signals from within their camp on how they would react, amid focus on the all-new 2022 car, were answered to day.

They have more firepower to untap according to Wolff: “I expect more engine to come tomorrow. There is tiny more engine; and there were less mistakes. We are pushing all the time. Even Lewis was in the simulator. He is keen to come back.

As for the upgrades called for by Hamilton after finishing a helpless second to Verstappen last weekend, Wolff explained: “The wind tunnel does not work anymore on this year’s car. We are getting there but the deficit to the Red Bull is still preoccupying so the team does not need motivation.”

The margins are tiny in this years contest, probably the smallest they have been between two teams in F1 history. Weather, rubber, track etc can all make the smallest differences and, of course, luck.

“Valterri finished second in Monaco. Max had a tire problem in Baku. The results can swing from weekend to weekend,” predicted Wolff.

Mercedes need a boost, to put behind them their worst spell in this second turbo era as they seek to shut down the 40 points deficit to Red Bull in the constructors’ standings. Hamilton trails Verstappen by 18 in the drivers’ table ahead of Round 9, in Austria on Sunday. (Additional reporting by Agnes Carlier)

That’s all for the on-track action today, but the work’s not done yet 💪

Insights make the difference & our @Petronas Trackside Fluid Engineers will be behind @MercedesAMGF1 all the way, as they prepare for quali 👊 pic.twitter.com/117jAkPW68