Sainz: Not a good idea to watch Italy v Spain with Ferrari 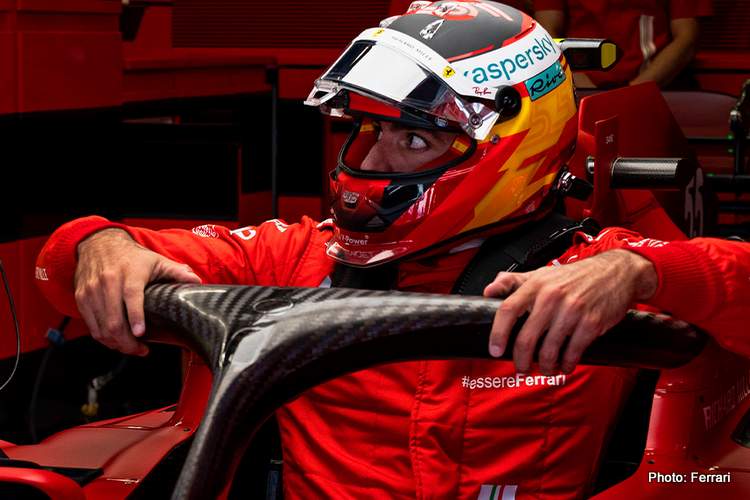 Football fever is at a high in Europe as the top footballing nations gun for the 2020 European Football Championships (postponed to 2021) with Italy and Spain, a potential clash in the semi-final which will end one or the other’s cup dream.

Ferrari driver Carlos Sainz, from Spain, was asked of his thoughts of such an encounter, to which he replied: “That would be a really great game to watch with the team…

“Or actually maybe not, as I’d be very much in the minority,” he was quick to add.

A keen football and Real Madrid fan, Sainz will be more focussed on the job at hand, at Spielberg II this Sunday, seeking a repeat of last weekend’s Styrian Grand Prix, rebranded to the Austrian Grand Prix, at Red Bull Ring where there was a resurgence of sorts for the Reds on race day.

Reflecting on Spielberg I, Sainz told reporters: “It was the first race since I’ve been at Ferrari in which everything went exactly according to plan and of course the next step is to manage to qualify as well as we did in France.

“Then perform in the race the way we did in the Styrian Grand Prix, when I went from 12th to sixth place,” pointed out Sainz which in a nutshell he is saying: The car is good in qualy at times, and good in the race at times but never good in both on one weekend.

Charles Leclerc added: “A few days ago here, we were really strong, so it was a shame about the first lap incident with Pierre [Gasly]. We have to start off again from the strong pace in the first race in Spielberg to tackle the second one in the best possible way.”

While the track is the same, the Pirelli rubber will be different to what was used on Sunday as Sainz explained: “We have softer compound tyres, which we will need to understand, cooler temperatures as well as a prototype tyre to evaluate before it is introduced starting from Silverstone.

“So, we will have quite a busy programme in free practice, which will also include preparing better for Saturday, at least in my case. I know I can do better than the last Grand Prix’s twelfth place on the grid..

“I think we have approached the weekend in the right way and we come here with plenty of data that should help us do better in qualifying, however, I don’t think it makes sense to compromise too much on race pace to gain one place on the grid on Saturday. It will be a busy and interesting weekend,” predicted Sainz.

Ferrari appear resigned to their midfield fate, as focus is on their 2022 car, which cannot be a dud like it’s predecessors.

The SF21 has shown flashes of the real deal, Baku and Monaco qualy for example, but other than that the Scuderia have to depend on the talent and prowess of their two very useful drivers to limit the damage.

Tifosi can expect much of the same at Red Bull Ring reloaded this weekend.

As for the footie, it’s worth noting that when Fernando Alonso drove for the Scuderia in 2012, Spain met Italy in the final of UEFA Euro 2012 in which the Spaniards triumphed 4-0.