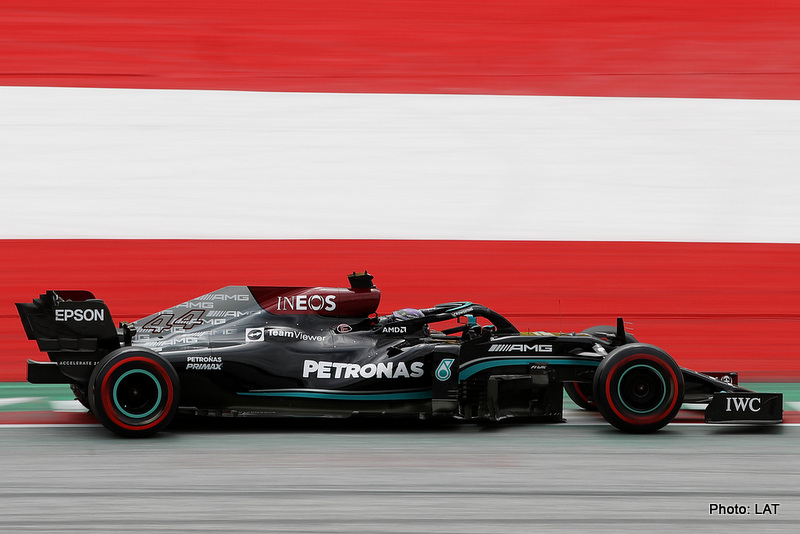 Lewis Hamilton topped FP2 for the Austrian Grand Prix from teammate Valtteri Bottas, despite an off as the rain began to fall at the Red Bull Ring.

While Max Verstappen had appeared to pick up where he left off last weekend in FP1, Hamilton and Mercedes hinted that Red Bull might not have it all their own way this time around, with the world champion setting a quickest time of 1.04.523.

The flying laps were mainly completed during the fast half of the session before the rain set in, with Verstappen settling for third, just behind the Mercedes duo.

Whether this is all the rain we see this weekend remains to be seen, but it is certainly a rogue factor that could shake up the order come Sunday.

Lance Stroll finished the session in fourth, recovering from a pretty disappointing FP1 where he spun twice, with teammate Sebastian Vettel slotting in one place back in fifth.

Like Mercedes, Aston Martin were somewhat off the pace in the morning session, but came on strong in the afternoon with the lower temperatures.

Yuki Tsunoda was strong once again in sixth, just ahead of Pierre Gasly in seventh, while Fernando Alonso was eighth during his first run of the weekend, with the Spaniard allowing Formula 2 leader Guanyu Zhou a drive in his car during FP1.

Lando Norris was ninth for McLaren in a session that saw him spin late on, and Antonio Giovinazzi was 10th.

Sergio Perez, much like in FP1, was adrift of teammate Verstappen and could only go 11th quickest, just clear of Esteban Ocon and Carlos Sainz in 12th and 13th respectively.

Ferrari went well in race trim last weekend and were second and third during FP1, but struggled a little more during the afternoon session.

Kimi Raikkonen was 14th, just ahead of Daniel Ricciardo in 15th, while Charles Leclerc had to settle for 16th in the other Ferrari.

George Russell was 17th, back in the car after Roy Nissany deputised during FP1, with Mick Schumacher 18th, Nicholas Latifi 19th and Nikita Mazepin 20th. 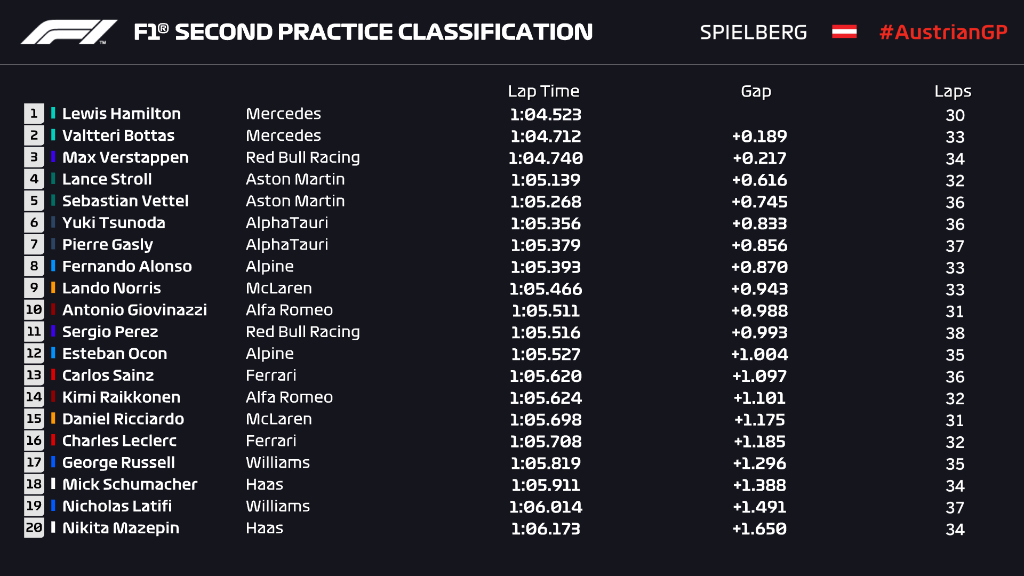