Perez: Racing Max and Lewis takes you to a new level 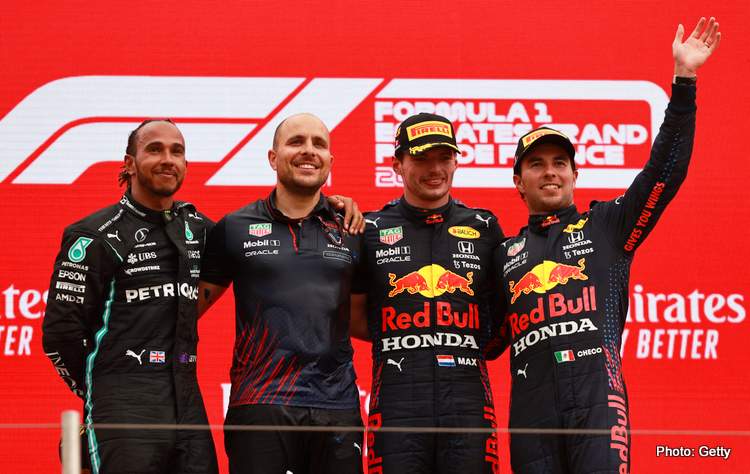 After years of labouring in race cars that would never sniff a victory, Sergio Perez is relishing racing against the two best of this generation, Lewis Hamilton and Max Verstappen, and each time he boots up he has a chance of winning a Grand Prix.

And he has done so already! Scoring a famous first win, in Blue, at the 2021 Azerbaijan Grand Prix on a day in which he kept his head while all around him chaos reigned.

That’s why Red Bull, relented and hired the veteran who, in turn, has helped his new team top the points standings, ahead of Round 9 in Austria this weekend, by 40 points; the last time that happened was back in 2013.

Speaking ahead of another home race for his team at Red Bull Ring this weekend, Perez said: “It’s obviously a great boost of motivation throughout the season to come to a race and you know that if you deliver to your maximum, you can end up winning a race.

“Also, the pressure is on, you know you have to deliver to a very high level. You are competing against the very, very best drivers. Against a very top team like Mercedes.

“So the level of delivering, it’s to a new level. Every single point and the way the team works, trying to maximise every single performance point is very important. You are into the next level.”

Indeed that level means Perez is in exalted company: “The race I had with Hamilton, literally against him, I was fortunate enough to see how good he is.

“The way he pushes you at the time that he does push you, and then when he saves his tyres, he’s obviously a very, very intelligent guy and the same to Max, you know. Racing these drivers at this level definitely takes you to a new level.

“I think we all know in this business how good Max is. He delivers at an extremely high level from FP1,” added Perez who has fast accepted the role of wingman to Verstappen, at the same time offering the team a solid double-pronged attack they lack since Daniel Ricciardo drove for the Bulls.

Perez is one of several drivers who changed teams, Ricciardo being another who changed from Renault to McLaren who said goodbye to Ferrari bound Carlos Sainz. The trio have all had their challenges vis-a-vis an established younger teammate.

The 31-year-old Mexican, set to start his 200th Grand Prix this weekend admitted: “I’ve found it harder than expected, the change of team.

“The fact that I came to such a different team in terms of power unit, car and so on, it was a big change, so it took me longer than expected to get up to speed, and I’m just getting better at it. I’d hoped for more by now but still the season is quite long.

“But I’m getting there. I think every single weekend we see a good improvement and I see no reason why I cannot get any better in the next five races, for example, to do another step. I’m happy with my progress so far, with my level that I’m delivering at, but obviously, it’s not enough and I want more than that,” explained Perez.