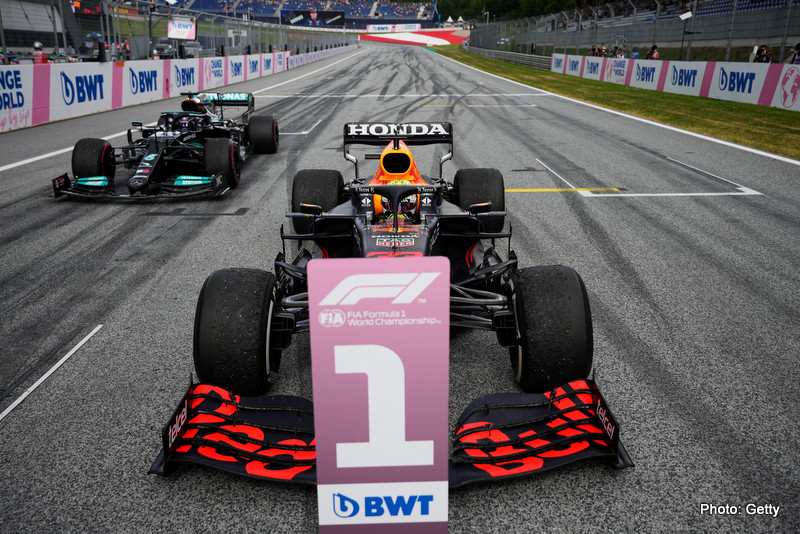 Red Bull can apply another turn of the screw to Lewis Hamilton’s title hopes in Austria this weekend as they chase a fifth win in a row.

The talk since the start of the season has been of a wheel-to-wheel title duel down to the wire between Mercedes’ seven- times champion and Verstappen, the 23-year-old Dutch heir apparent.

That perception could change if Verstappen follows up last weekend’s crushing pole to flag Styrian Grand Prix victory at his team’s home Spielberg circuit with more of the same.

Mercedes, dominant since the start of the V6 turbo hybrid era in 2014, have lost their winning feeling.

Hamilton has spoken out about the need for upgrades and more speed and the big question is how Mercedes respond to the challenge.

Verstappen is 18 points clear after eight races, still a sufficiently small lead for one retirement to wipe it out completely, while Red Bull are 40 points ahead in the constructors’ standings.

A fifth win of the season for the Dutchman, and third victory in a row, could put him out of immediate range, however.

It would also put the championship in a different light because nobody since McLaren in 2005 has taken five straight wins and not won the constructors’ title.

Consistency has been more of a strong point for Mercedes than Red Bull in the recent past but the Honda engine has been holding up well and the leaders keep bringing new parts to their car while Mercedes have switched focus to 2022.

“What looked to be the better car is now showing it in the results,” F1’s managing director for motorsport Ross Brawn sad of Red Bull after Sunday’s race.

“At the beginning of the year, Mercedes out-raced them. That is not the case now. It´s been the opposite in the last couple of races. Mercedes are trying too hard, and they´ve stumbled a bit.”

Red Bull team boss Christian Horner was clear about what his team needed to do.

“Max is, I think, driving with great maturity and consistency and we’ve just got to keep turning the screw and just keep our heads down, keep doing what we’re doing and just keep doing the basics well,” he said.

Behind the top two, McLaren and Ferrari are battling for third place.

McLaren’s Lando Norris will be chasing his eighth top-five finish in nine races while Australian team mate Daniel Ricciardo needs to raise his game after a difficult start to his time at the Woking team.

Further down the grid, Willams’ George Russell has an immediate chance to fix last weekend’s disappointment of having to retire after starting 10th and looking good for the former champions’ first point in nearly two years.

Pirelli are bringing softer tyre compounds to the race, which should mix up the strategies, while a full crowd will be allowed in. The weather could also be cooler than last weekend.