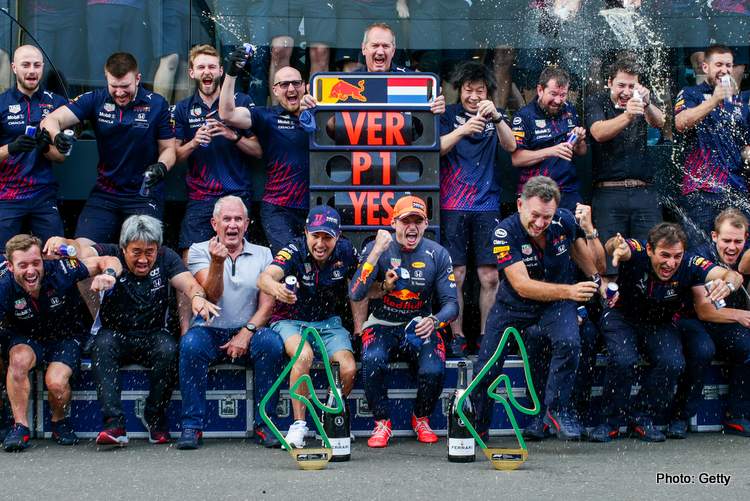 At this weekends Styrian Grand Prix post-race press conference, Mark Webber asked Lewis Hamilton if he was becoming concerned about the performance momentum that Red Bull Racing seem to be gaining.

To which Hamilton replied: “I don’t know whether it’s just their rear wing or whether it’s the upgrade in the engine or whatever it may be, but we have to find some performance from somewhere.”

Whilst the 2021 Formula 1 season has certainly progressed far enough to validate the claim that Red Bull has a distinct performance advantage, the reasons for that advantage must be determined before any recovery can be planned.

Historically, there have always been measurable performance advantages gained by teams in F1, though often this happens because of specific technical innovations. However, in 2021 Red Bull seem to have gained the performance advantage due to a combination of well-choreographed and managed factors.

One of the keys to performance in F1 is the tyre and how it is operated. The way the tyre performs is because of a combination of aerodynamic, mechanical and circuit surface characteristics and it appears that in 2021 RBR can find that “sweet spot” quite rapidly at almost any circuit they visit. In finding that narrow operating window, they realise and maximise the balance between tyre performance and degradation.

For the pre-Baku races it was arguable that RBR were using lower static tyre pressures and associated tricks with tyre blankets to help facilitate, but the FIA’s introduction of Technical Directive 003 Revision C regulating the operation of the tyres in a more detailed manner has further mitigated the risk of this occurring.

In evaluating the performance differential between Mercedes and Red Bull with respect to tyres it is evident that circuits with a more abrasive surface, higher traction and asphalt grip characteristic such as Bahrain and Barcelona have been the only type of surface where Mercedes have seemingly been able to activate the tyre better than RBR.

The Honda power unit output has been a hotly discussed topic in recent days. It is widely accepted that because the F1 PU is homologated by the FIA, PU upgrades during a season can only be for reasons of reliability and not in pursuance of performance.

It has been reported in recent weeks that Red Bulls fuel and lubricant partner, ExxonMobil have provided them with a significantly upgraded engine oil.

Honda F1 technical director Toyoharu Tanabe has indicated that Honda and ExxonMobil have developed a “technical and personal” relationship and the resultant lubricant upgrade not only reduces internal ICE oil residue deposits, it also apparently able to operate at higher temperatures and give better cooling characteristics whilst providing better frictional losses and efficiencies.

Overall, the oil upgrade is supposedly not only providing better reliability, but also improved performance.

One of the benefits of improved PU performance is the ability to reduce drag, and this year it has become a common theme that RBR have been using noticeably smaller or low drag wings, and in particular rear wings. Even in the face of the flexi-wing controversy and the associated resultant FIA technical directives, it appears as though RBR have been able to maintain that ability.

Likewise, it appears that an aerodynamic advantage has been realised in the Red Bull rear diffuser design as a reaction to the 2021 FIA regulation change that affects the region of the floor in front of the rear wheel and its probable association in favoring a higher rake aerodynamic concept.

At the recent French Grand Prix, Mercedes was forced to quash media theories that the planned swap of monocoques between Hamilton and Bottas was for performance reasons. As Toto Wolff pointed out, the 2020 Mercedes monocoque design was carried through to 2021, like other teams such as RBR, due to rule stability and performance upgrade token limits.

Whilst at face value it is completely believable that a 2020 monocoque should behave in the same manner in 2021 as it did in 2020, there have been subtle regulation changes such as those to the under-floor and to tyre construction that may possibly impact tub behaviour characteristics.

If that is true, then it is possible that the RBR monocoque is performing in 2021 conditions better than Mercedes, potentially throwing more fuel to the question of why Mercedes did the tub swap.

For several years, Red Bull have been known for their excellence in pit stops and their ability to service a car in pitlane in the sub-two second-time bracket. This ability has not only given them a time and track position advantage but has also given them strategic agility. Whether or not this is an advantage that can be exploited much further will depend on the impact of the forthcoming FIA technical directive because of enquiries Mercedes have made with the FIA on the grounds of safety.

Red Bull have become known as late starters in recent years, starting off with a performance deficit but being able to reclaim on the performance differential towards the latter part of the season, but too late to make any real challenge to either the Drivers or Constructors titles.

Arguably Red Bulls greatest advantage this year has been its ability to continue that development path slope, but from a much better performance starting point. In 2021, RBR started off at a greater level of parity with Mercedes.

Whilst they have obviously realised a technical advantage in performance, it cannot be overlooked that the Red Bull is simply being driven to the limit of its ability. The impact that Max Verstappen is having on the performance of the RB16B cannot be under-valued and is a particularly important factor in RBR’s advantage.

Quite obviously, the Mercedes pursuit of better performance in 2021 is a difficult issue to resolve, if it can be at all. Can better performance be squeezed from the W12, is the RB16B a better car, or is Max Verstappen now the supreme driver in F1?