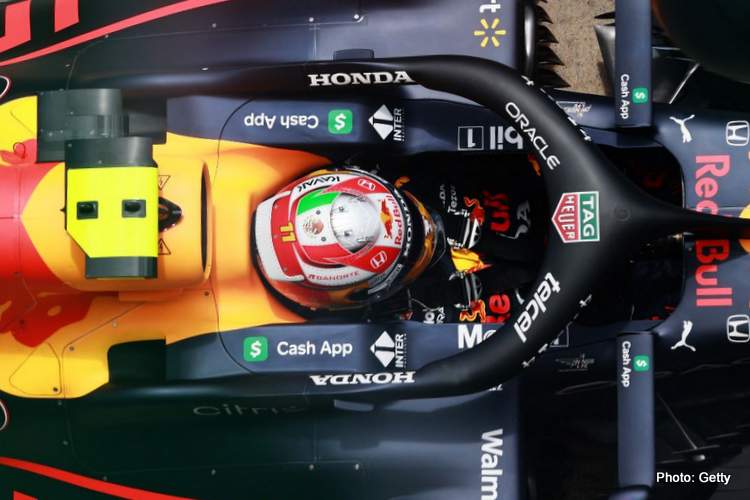 Mercedes and Lewis Hamilton were left scrambling under extreme pressure from Red Bull as Max Verstappen dialled up the heat with his strongest Formula 1 pole position lap to date.

Let’s crunch the numbers from the 2021 Styrian Grand Prix qualifying session and figure out what really went down at the Red Bull Ring on Saturday. 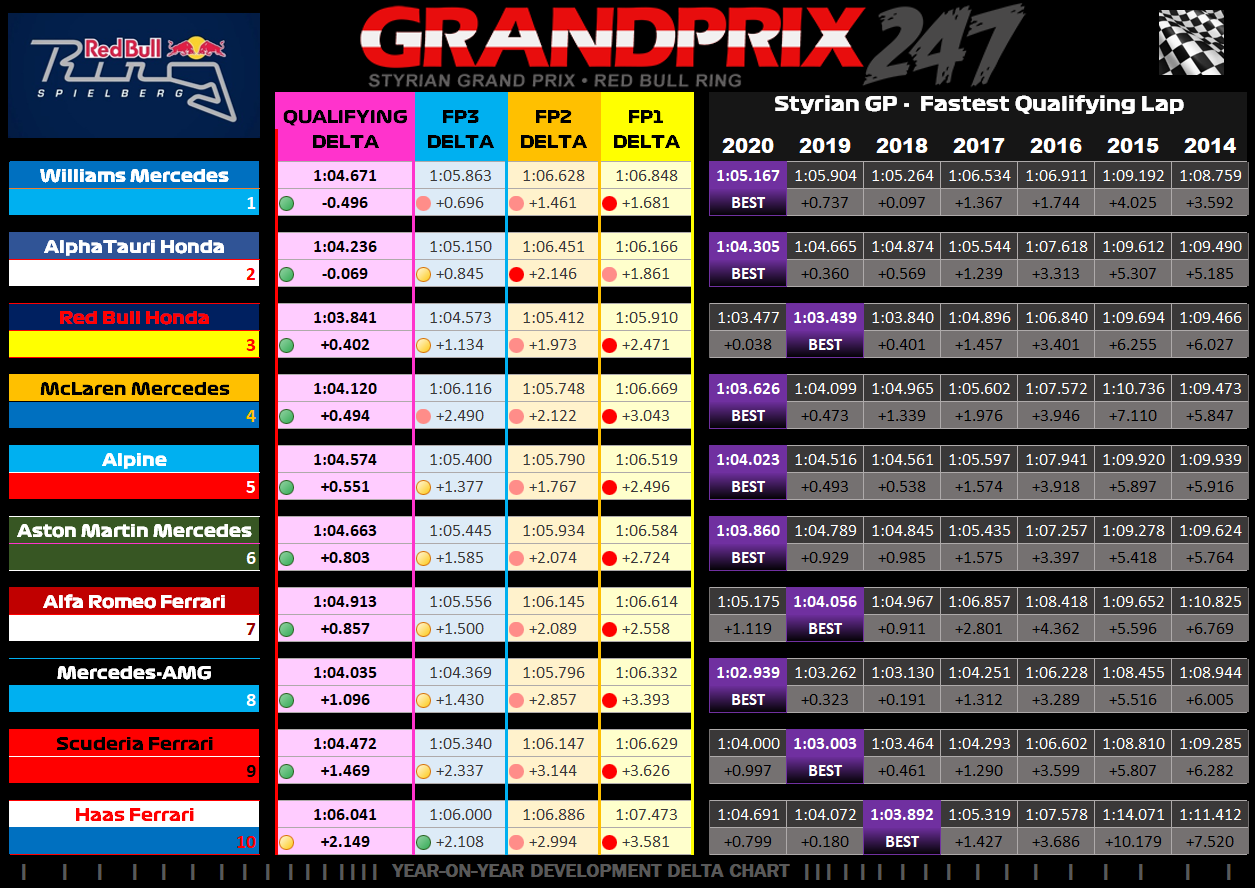 It was a powerful sixth pole position for Max Verstappen and once again a strong performance overall from Red Bull. During to run up to the weekend, Lewis Hamilton expressed the need for both he and his team Mercedes to maximize ‘absolutely everything’ to give Red Bull a run for their money.

Unfortunately for Hamilton, it was Verstappen who maximized absolutely everything delivering the only sub 1:04 lap time of the session. The most pronounced weakness of Hamilton and Verstappen in qualifying this year has been consistently soft initial Q3 runs, but today the Dutchman lowered the boom in Q3 with his brutally fast and eventual pole lap on his first attempt.

The progress chart above shows comparisons from each team’s fastest lap today, compared to their respective fastest lap in previous years. Williams led the way in terms of development bettering their 2020 lap by 0.496s.

AlphaTauri’s AT02 challenger shined bright with a second-best in development result, and notably faster than last year’s best lap as well. Red Bull are an astounding third-best in development with the aid of a perfect lap from Verstappen. McLaren returned to the head of the chart after a disastrous qualifying session last time out at the French GP.

The result for Red Bull and Mercedes is similar to that of the French GP. While the news is good for Red Bull, the nightmare that is 2021 for Mercedes appears to be one that will haunt them for the remainder of the season. Mercedes delivered the worst development over previous years in France among all teams, and it isn’t a much better showing today, registering eighth-best in this session.

Mercedes end the session a full second slower than their best lap last year, losing seven-tenths in direct battle to Red Bull by comparison. The losses are startling and amazingly not out of the ordinary as the result today is in line with those already shown this year for Mercedes. 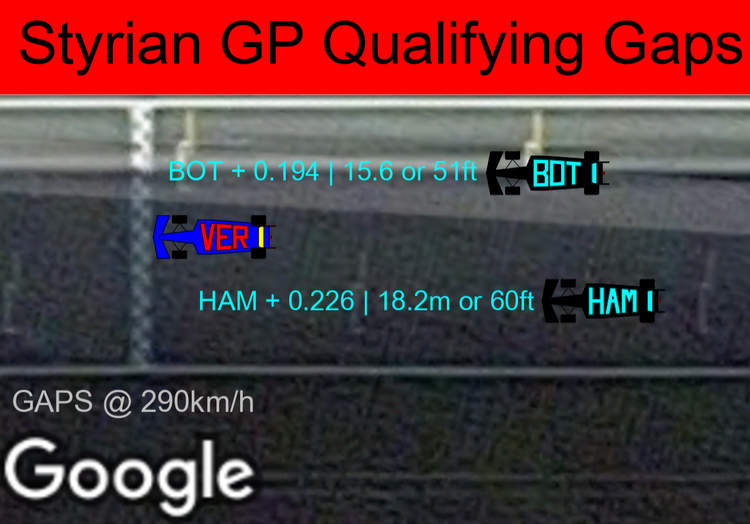 Lucky Thirteen Drivers Covered By Less Than A Second

Helped by the Red Bull Ring circuit having the shortest lap on the current calendar this year, thirteen drivers found themselves within one second of Verstappen’s spectacular pole position.

It was another poor session for Ferrari, the second in a row after an equally terrible and well documented and alarm bell sounding French GP qualifying session. Ferrari’s problems were compounded by a resurgence in qualifying pace from McLaren with Lando Norris leading the McLaren/Ferrari driver quartet with an exceptional fourth position qualifying session result.

Charles Leclerc was able to extract the most out of his SF21 challenger despite being beaten by Norris and notably Pierre Gasly in the AlphaTauri. Carlos Sainz and Daniel Ricciardo on the other hand were distant to their teammates pace with Ricciardo being shown as having the largest lap time delta to a teammate, +0.688s to Norris. 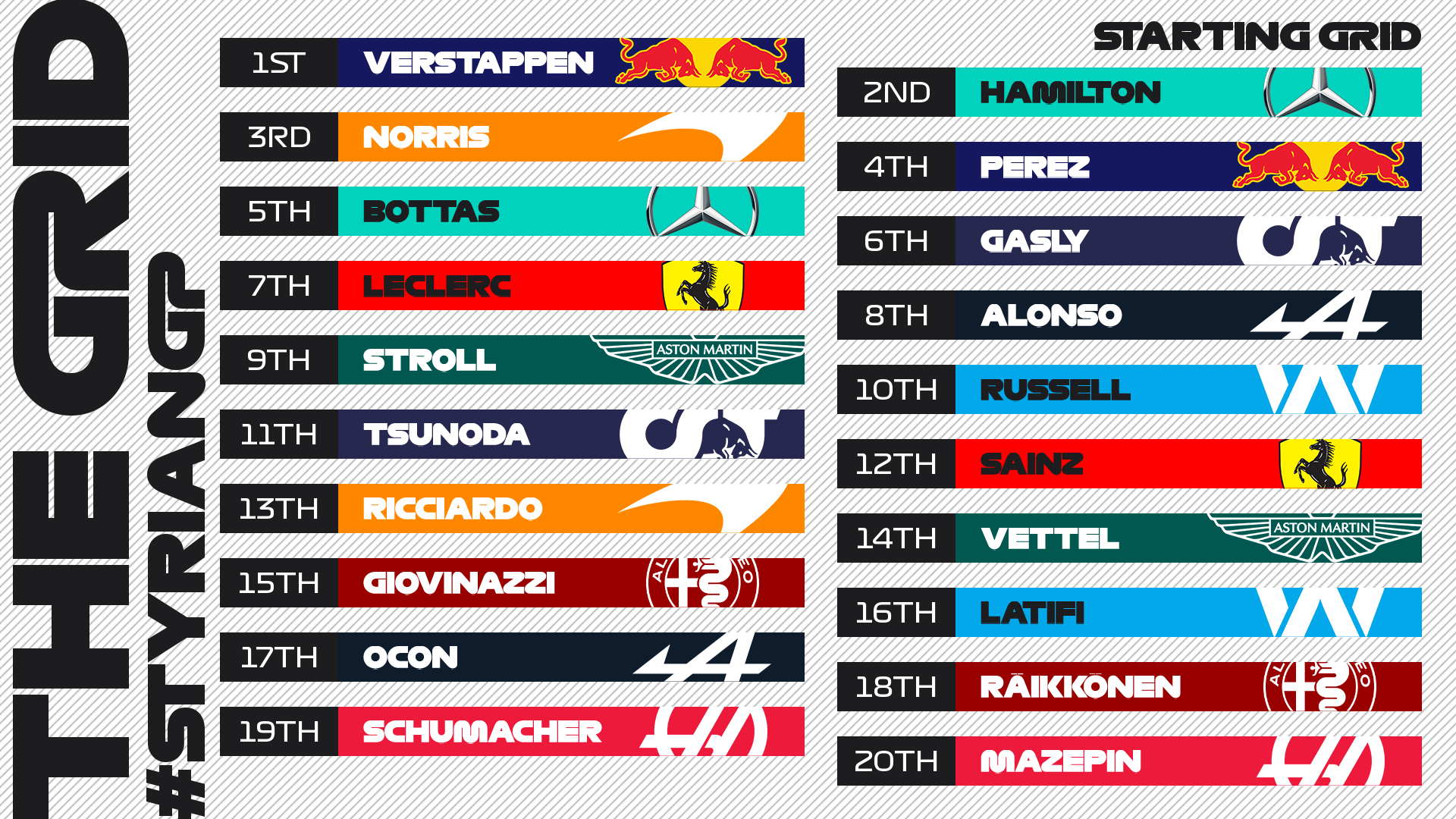