Ferrari: A below average qualifying at Spielberg 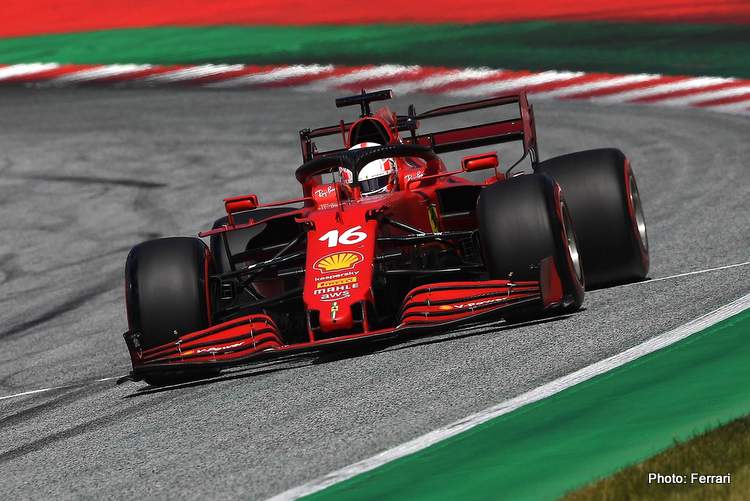 Charles Leclerc salvaged a little pride for his beleaguered Ferrari team in qualifying for the 2021 Styrian Grand Prix on a weekend in which the Reds were seriously lacking firepower for their drivers.

Leclerc tends to find an extra bit when it comes to quali, in today’s session he did just that again with a best effort of 1:04.472 which was good for seventh, but 0.6s shy of the top time at the ultra-short Red Bull Ring.

Ferrari headlined their Saturday press release from Spielberg: “A below average qualifying on Saturday in Spielberg.”

Credit for their honesty, which was shared by Leclerc in his end of the day report: “P7 is not the ideal starting position, but it was in line with our expectations. Our race pace has been pretty solid this weekend, and we did not want to sacrifice it for a slightly better qualifying result.

“Tomorrow is what counts, and if our pace is as good as it has been so far this weekend, I am confident that we can gain some positions and bring home some good points.

“I am very happy with my lap and put everything I had into it without making mistakes. It was difficult with the traffic, especially in Q1. Then, in Q3, we decided to put on new tyres out of sync with the others to run in free air.

“We have worked well and I feel confident in the car. We will prepare as well as possible for tomorrow and hopefully, we can have a good one,” ventured Leclerc.

The Spaniard will line up 12th for a race in which more pain can be expected by Tifosi if their dismal zero points haul in France last week is anything to go by.

“This was not such a good day,” lamented Sainz: “Yesterday we struggled with our one-lap pace, so we were not expecting miracles. Qualifying outside the top ten is not ideal, but with such a tight field on such a short track you have to nail all three sectors and I was missing a bit in sector 2.

“There’s some consolation in the fact that I have a free choice of tyre compound on which to start and we will try and make the most of that. Yesterday, our long-run pace was not bad, so I hope I can get a good result.

“This afternoon is not the end of the weekend and we’ll fight until the very last lap to get the best result possible,” promised Sainz.

Ferrari racing director Laurent Mekies added: “As expected, this was a difficult session. Compared with what we have seen so far on Saturday afternoons, we were unable to reproduce our usual performance level over a single flying lap.

“We tackled this Grand Prix with a slightly different approach to usual, working mainly towards the race after the problems we encountered last week in France.

“That’s not a mitigating factor, because I don’t think we could have done much better than this, looking at the performance of our main rivals, but it is something to bear in mind when looking at today’s results.

“From what we saw yesterday, our long-run pace is not bad compared to our closest competitors and we will try and exploit that tomorrow afternoon.

“Every day of this season is an opportunity to improve and to help make the team strong and today was no exception, an additional experience to make the most of, for the short and the long term,” added Mekies. (Additional reporting by Agnes Carlier)