Verstappen: Lewis, how often do you get your cornrows done? 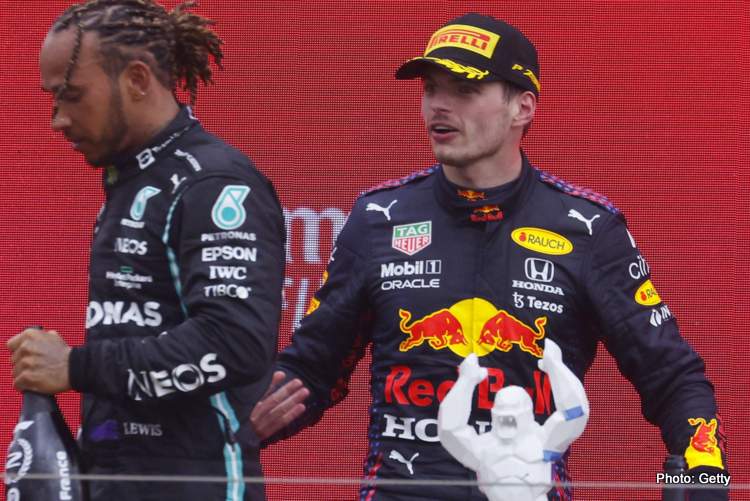 While it’s war between their teams, for Lewis Hamilton and Max Verstappen – the two title protagonists for 2021 – there is harmony when the microphones and TV cameras are switched off.

According to Formula 1 pundit Tom Clarkson, who is privy to off-camera banter between Hamilton and Verstappen in parc ferme, reported that even after their intense duel for 2021 French Grand Prix victory they were cordial and even cracked jokes with one another.

Talking on F1 Nation, with Damon Hill and Natalie Pinkham, Clarkson revealed: “What was interesting after the race was that we think there is friction maybe between the team principals, Christian and Toto, and difficult times for Mercedes at the minute.

“But the relationship between Max Verstappen and Lewis Hamilton is still fantastic. After the race, came into the press conference room really relaxed. Max, before the cameras were turned on, sat there chatting to Lewis.

“Lewis talked about Max’s straight-line speed advantage, Max changed the subject and asked him about Lewis’ hair. ‘Is it the cornrows, is that what you call it? He said, how often do you have to get those done’ [asked Max].

“Oh, about once a week, I get a mate to come in… [said Lewis] there was all this kind of stuff going on – Lewis had just lost the race to Max Verstappen but it was all very relaxed, very harmonious.

“They had been together in the press conference on Thursday before the race – total harmony again,” added Clarkson.

To which Hill quipped: “Maybe they are teammates next year…”

Cornrows or canerows are a popular and widely used form of traditional hair braiding, used by all genders.

Verstappen leads Hamilton by a dozen points in the 2021 F1 drivers’ standings, ahead of this weekend’s Styrian Grand Prix at Red Bull Ring, Round 8 of the championship.

We’re in for a big fight this season and we’ll have to dig deep as a team. We are up for it! 👊#FrenchGP pic.twitter.com/Gz44uDKOMc