Vettel: It was a strong performance by the whole team 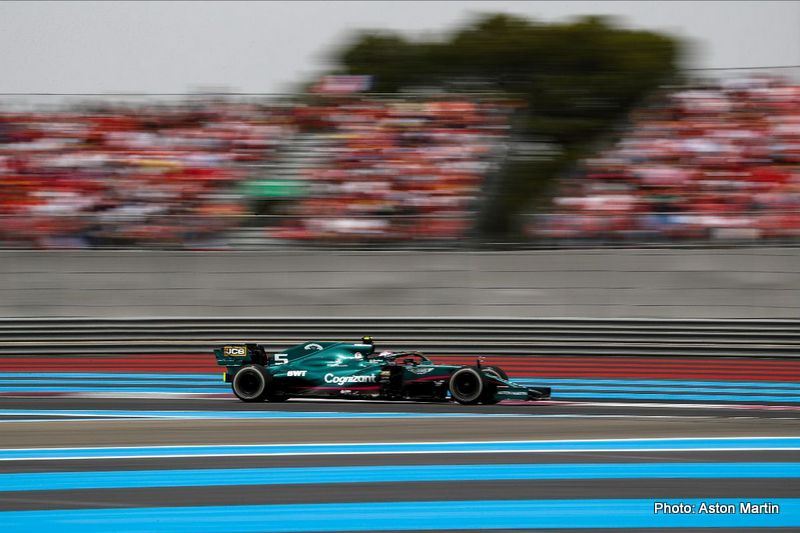 Sebastian Vettel praised his Aston Martin team after they achieved a double points finish at the French Grand Prix despite a difficult qualifying session.

After a run of excellent results for the German, he had to settle for P12 in qualifying but recovered well on race day to finish ninth after running long on the hard tyre in his opening stint.

The points were further evidence of Aston Martin’s improvement in recent races and Vettel said it was a “strong performance by the whole team”.

“I think we had to do something different with the strategy today and it worked out for us quite nicely with both cars inside the points,” he said. “Unfortunately, I went off the track in the first stint and lost a lot of time because I was just pushing a bit too hard.

“Without that, I would have been closer to the group of cars ahead and with fresher tyres at the end. So maybe we could have finished a bit higher up if things had been perfect. It was hard to be consistent in such windy conditions, which were tricky for everybody to judge. But we made the best of things and it was a strong performance by the whole team with competitive race pace.”

Stroll did well to finish just behind Vettel in P10, pulling off a number of good moves in the opening stages of the race to move through the field.

“I was comfortable in the car and we were able to extract some good pace today,” he added.

“Paul Ricard is normally a track with little overtaking, but I managed to make all of my passes on track. Conditions were a bit tricky out there because the wind was changing from lap to lap, and there was quite a bit of tyre degradation across the field.

“Towards the end of the race, a lot of drivers were struggling for grip and we were able to take advantage to finish P10. It was a well-earned result and a good strategy certainly helped. Getting both cars into the points is a decent result, especially because we started P19. We have made progress with our race pace, but we need to make further gains on Saturday to help continue our consistent points-scoring form.”

Formula 1 is back in action this weekend for the Styrian Grand Prix at the Red Bull Ring in Austria.