Mercedes: The race was a couple laps too long for us 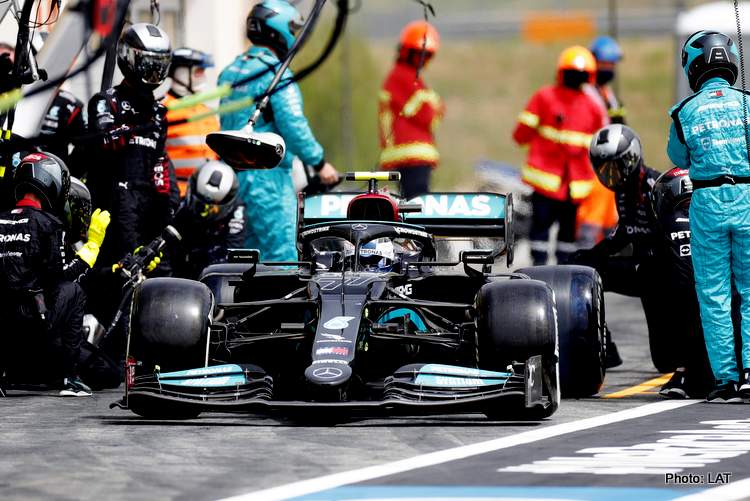 Had the 2021 French Grand Prix ended on lap 51, today Mercedes would be trumpeting Lewis Hamilton’s genius but instead they leave Paul Ricard with tails firmly between their legs after another beating by Red Bull.

Mercedes presented a slew of ifs and buts in their post-race press release, trackside boss Andrew Shovlin reporting: “We could see the degradation was higher than expected but were wary of the two-stop strategy with Lewis as we’d need to pass Perez who had relatively fresh tyres.

“Once Max made the move our best option was to see if we could just hang on but unfortunately the race was a couple laps too long for us,” Shovlin said of the 53 lap race.

Indeed it was, what looked like a sure first for Lewis Hamilton and third for Valtteri Bottas turned into a second and fourth as keeping both cars on a one-stop strategy doomed them to running on canvas in the final laps in which Max Verstappen simply gobbled them up, on his way to a well calculated and executed victory at Paul Ricard on Sunday.

Team boss Toto Wolff added: “Today [Sunday] went back and forwards, we were in the lead because Max made the mistake but our overall pace was good – maybe a little bit of a margin, even. We created a three-second gap for the undercut, to protect it, but it wasn’t enough and we came out of the pits a few tenths behind.

“In the first stint, Valtteri’s tyre started to have a vibration early on and we were really worried. We knew that by pitting we were going to trigger the stops too early but we had no choice. The guys managed their hard tyres well after that but in the end, it wasn’t enough.

“We have lots to learn from today and we need to understand the great pace of the Red Bulls on their out laps. It’s something we’ll look at to help us improve but I think we had a solid racing car today and I’m glad it was an exciting race, we love entertainment too,” insisted Wolff.

The facts are that Mercedes head to Red Bull’s homeland trailing their rivals in the 2021 F1 constructors’ by 37 points while Hamilton lost ground to Verstappen and is now a dozen adrift after seven rounds.

Adding insult to injury is that this was perceived to be a “Mercedes track” as Hamilton had won the two previous races here in 2018 and 2019, prompting Red Bull boss to declare before the race at Le Castellet that beating the World Champs there meant they could be beaten anywhere.

Shovlin added: “A frustrating day, we had a good opportunity to win and get both cars on the podium so the result is obviously very disappointing.

“Lewis had control of the race in the first stint and if anything we looked to be a bit better on degradation. We triggered the stops ourselves with Valtteri who was struggling with a growing vibration and that was clearly earlier than we wanted to come in but it was getting to a level where we didn’t have an option.

“Max obviously took the next lap to protect against Valtteri but with Lewis having just over three seconds of margin, we thought that he would have just enough protection from the undercut but that wasn’t the case.

“The pitstops were good, the hard tyre was obviously quick but there’s more that we need to go through to understand why we lost the place,” explained Shovlin.

During and after the race, Bottas made it abundantly clear he was aggrieved after being ignored by his team when he was pushing for a two-stop strategy.

Shovlin explained: “With Valtteri we’ll review whether we should have converted to a two-stop but as with Lewis, we were afraid of the fact that Sergio’s tyres were relatively fresh and unsure if we’d have the speed to pass on track.

“We’ve not got long to prepare for the next race and there are some areas we know we can do a better job on; we’ve clearly got a decent race car, we need to find a bit of speed on single lap and we need to be perfect on our operations but we’re happy that we’ll be back on track in a week,” concluded Shovlin.