Verstappen: It’s great to be on the podium with Checo 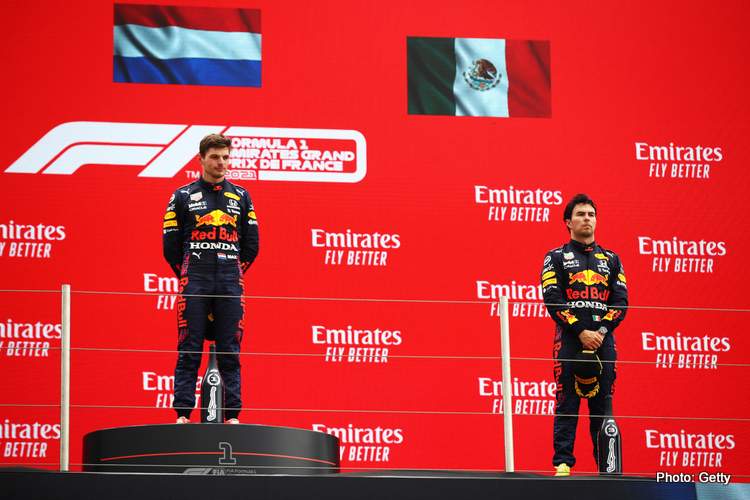 If the French Grand Prix were to be likened to the famous tortoise versus hare race, where the nippy rodent with speed and winning on his mind gets beaten by the slower but shrewder reptile, the tale at Paul Ricard took a twist: the hare – Max Verstappen – turned the tables on the tortoise – Lewis Hamilton – by snatching the win at the end of a thrilling highspeed chess game.

Verstappen did all that was asked of him, turning a two-stop chase into victory while Mercedes opted for a more conservative one stop to defend track position. But to no avail, with two to go the Dutchman caught up with Hamilton and, although by no means a tortoise, there was simply no fight left in the #44 car.

Instead, it was another famous victory for the Blues, the first time since 2013 they have won three races on the trot, which Verstappen attributed to the collective: “Winning this race was an amazing Team effort and to have a double podium at a track like this really shows the hard work everyone is putting in here and in Milton Keynes at our factory and Honda’s.

“Of course I would have liked to pull off into the distance and cruise ahead on my own but it doesn’t often work like that in Formula 1 and we really had to work for it today. You can see how close the two teams are and to win like this on strategy with two laps to go is very rewarding.”

The victory did not come without a slight wobble, after fending off a double-pronged Mercedes attack into Turn, the Red Bull got slippery through the next bits which cost the Dutchman the lead early on which went on to prompt the undercut.

He explained: “It was certainly not an easy race and I got caught out at Turn 1 and lost the rear which meant I had to go off the track and lost a position to Lewis. I was, of course, upset at the time but I knew there was a long race ahead and I had to focus.

“In the first stint, I didn’t really have the pace to fight with Lewis so we took the risk to pit first and to be honest I didn’t expect the undercut to work so well that I would come out ahead. They were pushing hard to try and pass me but luckily I could just about stay ahead and I knew I couldn’t make any mistakes.”

Verstappen’s strength was in his pre-pitstops in and out laps, which purely sensational and where the race was won: “We decided to go for the two-stop strategy which worked out well as our car suited the conditions towards the end of the race as the wind became a little less and the track rubbered in. In the end, we made the right calls for both cars and it is great to be on the podium with Checo.

“We should all enjoy this for a few days until we get to Austria and start again,” added Verstappen who heads to his team’s home race at Red Bull Ring by 12 points over Hamilton after seven rounds. (Additional reporting by Agnes Carlier)

How good is this championship battle? 🙌#FrenchGP 🇫🇷 #F1 pic.twitter.com/mzdpiq9pQW