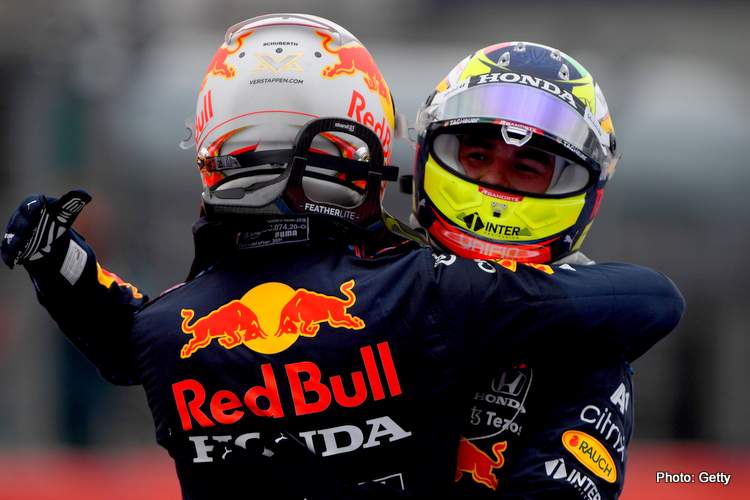 Sergio Perez admitted after qualifying he had erred and denied his Red Bull team a front-row lockout for the French Grand Prix but made amends on Sunday, to turn fourth on the grid into a podium place and was happy his teammate won the race.

While the ‘commanders’ Max Verstappen and Lewis Hamilton battle it out for top honours, their ‘wingmen’ – Perez and Valtteri Bottas engaged in their own war.

At Paul Ricard on Sunday, Perez was again superb with his tyres, doing a long first stint before bolting on the harder tyre and thereafter slowly, but cunningly, hunting down Bottas whose tyres were shot. On lap 49 the Mexican snatched the final podium spot from the Finn’s grasp.

It was a big result for Red Bull, with Perez’s effort helping widen the gap in the constructors’ standings after seven rounds.

He said immediately after the race: “We did a great race and a great strategy from the team. I’m happy that Max won the race today and good points for the team.”

Perez added in the team report: “The Team did a fantastic job today with great strategy and making the right calls at the right time so well done to everyone here and back at the factory. It’s a great result for them which is what really counts and so I’m happy with that.

“On my side, this weekend wasn’t as good as I hoped it would be, as drivers we only want to win so I just have to keep working hard, continue improving and getting better results with the great car that I’ve been given.

“Back to back podiums is still solid points but I just needed probably three more laps to get past Lewis for the 1-2 finish, so we’ll keep pushing to get it at our home race in Austria.

“I think it will be very good for me to have two races back to back in Spielberg as the first race will give me much more of an understanding of how the car performs around there and as a result a better baseline for race two.

“Hopefully we can be in contention for the win and continue this momentum,” added Perez on 84 points and lies third in the F1 drivers’ championship after seven rounds. Verstappen leads on 131 points, a dozen ahead of Hamilton’s 119 in second. (Additional reporting by Agnes Carlier)