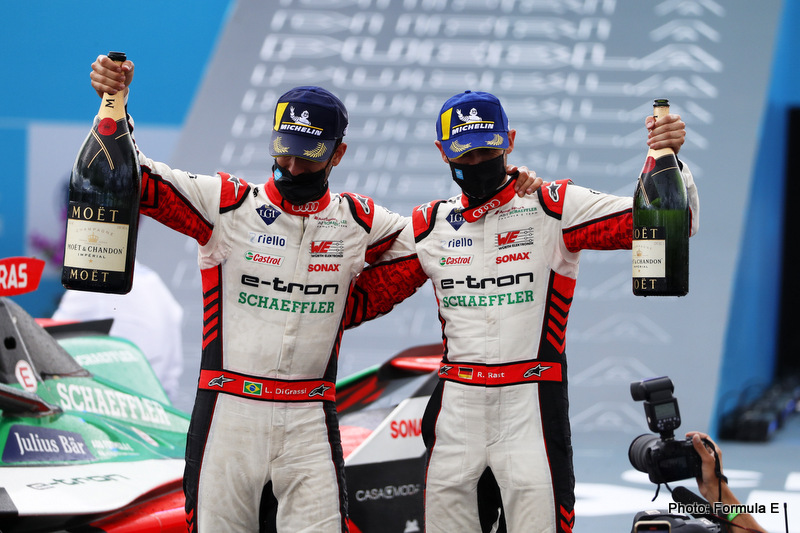 Lucas di Grassi took the race win in the CBMM Niobium Puebla E-Prix Round 8, leading a one-two for Audi ahead of teammate Rene Rast.

It had looked like a maiden victory was on the cards for TAG Heuer Porsche, with Pascal Wehrlein leading the contest from the off, only for the Porsches to be disqualified for failing to declare their tyres with ROKiT Venturi Racing’s Edo Mortara rounding out the podium.

Both Wehrlein and Porsche had continued their good qualifying form in Mexico as the 26-year-old took his second career pole position after recording the same result in Mexico City in 2019 and his team also taking pole in the country for the second season in a row.

The race suffered from a stalled start as Oliver Rowland (Nissan e.dams), having dominated Free Practice and starting second, failed to get off out of the gate cleanly before Nick Cassidy’s crash ended his day within five minutes and brought out the safety car.

This saw Wehrlein closely followed by the two BMW i Andretti Motorsport drivers as the race restarted under the green flag. Wehrlein took his first ATTACK MODE activation soon afterwards, to briefly drop into third but was able to regain second spot and then first when Max Guenther also moved to take his.

Two-time former champion Jean-Eric Vergne (DS TECHEETAH) moved up into the podium places 20 minutes into the race as he held off from moving off the racing line to take his 35kW power boost while race leader Wehrlein went the other way and took his second around the same time.

It was a tale of two races at this point as Vergne’s ended moments later – the DS driver clipped re-joining the race by Alexander Sims (Mahindra Racing) – while Wehrlein was able to make his way back through Turn 8 cleanly and in first place.

Jake Dennis allowed teammate Guenther by, with the German in ATTACK MODE looking for the chance to chase down Wehrlein who had clear daylight between himself and the chasing pack. Meanwhile, Jaguar Racing’s Sam Bird was caught in a collision with former teammate Alex Lynn of Mahindra Racing to end his race.

As the race entered the final five minutes, both BMWs fell back from second and third into fifth and sixth as the chasing pack picked things up. Di Grassi clambered into third on-track while Mortara went one better into second.

In the closing stages, Mortara was the cork in the bottle for the two Audis but Brazilian di Grassi eventually managed to leapfrog the Swiss into second, with Rast following into third soon after and secured the TAG Heuer Fastest Lap.

Wehrlein took the chequered flag on-track but that tyre infringement meant di Grassi was able to take the victory – 12 eruptions of the local Popocatepetl volcano since his last in May 2019.

Formula E returns to the race-track in Puebla for Round 9 on Sunday, June 20.