Verstappen: We really did not expect pole here 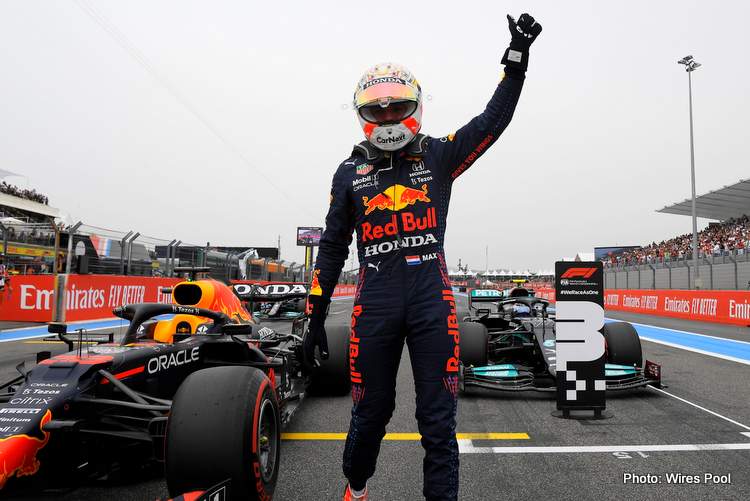 Max Verstappen powered to his fifth Formula 1 pole with a scintillating performance to claim top spot start for the 2021 French Grand Prix, the Red Bull driver denying Mercedes who are clearly a revived team at Paul Ricard.

Always one to wear his heart on his sleeve, inadvertently or not, he gave a glimpse of his hand with a jaw-dropping hot lap in FP3. A couple of hours later he replicated the form to take a convincing pole on a day no one had an answer to his pace.

Verstappen’s pole winner 1:29.990 was 0.258s faster than title rival Lewis Hamilton’s effort and half a second up on teammate Sergio Perez.

After six rounds, Verstappen leads the championship standings by four points from reigning World Champion Lewis Hamilton, the Mercedes driver was second-best on the day lacking a quarter second to his younger rival.

Speaking to media afterwards the Dutchman said: “So far it’s been a really positive weekend, on a track that is normally difficult for us. To get pole position was really nice.

“Great day for us but we have to finish it off tomorrow and get 25 points – which we lost in Baku. Great promise from our side. The car felt good, so looking forward to it.”

Later Verstappen added in the Red Bull qualifying report: “To be able to put it on pole here, on a track that has not been our favourite in terms of performance, is very promising and a big boost for the Team.

“We really did not expect it so I am of course very happy. Everything has been working really well all weekend and from today even compared to yesterday we made a good improvement through hard work and maximising set-up.

“I was confident after FP3 but you never really know where you are or what everyone else will bring in Qualifying, so we should be very happy with this performance so far.

“There is a long run to Turn 1 so we have to get a good start tomorrow and for sure they will be very close but our long-run pace in FP2 looked good so I expect another tight battle,” predicted Verstappen. (Additional reporting by Agnes Carlier)