Perez: Locking out the front row was possible 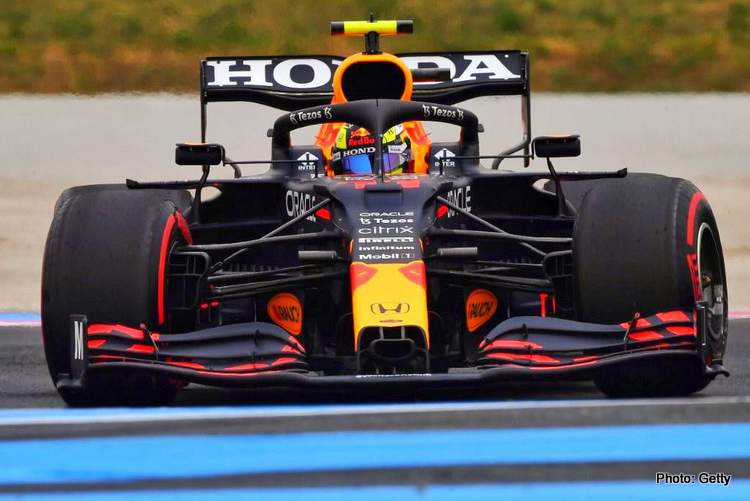 Sergio Perez put his hand up and admitted to making a mistake which cost Red Bull a front-row lockout for the 2021 French Grand Prix, the Mexican will start from fourth with teammate Max Verstappen lining up in pole position.

After the first runs in qualifying Q3, both Red Bulls hogged the top of the timing screens suggesting a one-two was plausible, but when it mattered Perez made an error that scuppered those ambitions.

He explained in the Red Bull qualifying report: “It wasn’t an ideal qualifying as I think locking out the front row was possible but unfortunately I made a mistake on my final Q3 run which cost me quite a bit of lap time.

“We were going in the right direction and I was feeling comfortable with the car but I just ran wide over the kerbs at Turn 12 and the lap was gone. But tomorrow is when it matters and we have better race pace than in qualifying so we should really be in the mix.

“It will be very close with Mercedes so I will be applying the pressure from the very first lap. My starts have been good so the plan is to get a couple of positions off the line and manage the race from there to try and bring home a 1-2 for the Team.

“I think the race will come down to tyre management so hopefully, we can outperform them in that area but either way it’s going to be very entertaining for the fans and now I’m just looking forward to tomorrow!” added Perez.

Tomorrow the Mercs are in a Red Bull sandwich on the grid, with Bottas starting behind Verstappen and Perez behind Hamilton, setting up what should be one of the fiercest battles between the two teams who genuinely have four cars in the mix, unlike in previously where it was Max solo.

Victory in Baku and a good showing thus far in France, suggest Checo is finding confidence and is now where Red Bull want him to be relative to their benchmark Verstappen. (Additional reporting by Agnes Carlier)

🗣 “My starts have been good so the plan is to get a couple of positions off the line and manage the race from there to try and bring home a 1-2 for the Team.” @SChecoPerez on #FrenchGP qualifying 🇫🇷👉 https://t.co/l1aapVKtJc pic.twitter.com/HQmxOAcWOl