Correa: Very special to be back with Sauber Academy 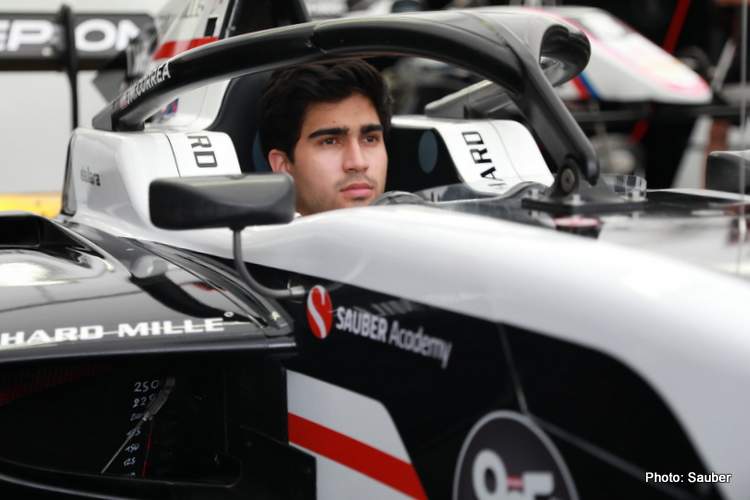 Juan Manuel Correa has been handed a boost on comeback after his near-fatal crash during the 2019 Formula 2 race at Spa-Francorchamps, the Sauber Academy have opened the doors for him to continue his development with the team.

Sauber Academy welcomes back an old friend of the team as Juan Manuel Correa joins the Sauber driver development pathway for the 2021 season.

The 21-year-old, who competes in the FIA F3 Championship with ART Grand Prix, knows the Hinwil squad very well, having tested one of the team’s cars in 2019.

That test, held at Paul Ricard, the same venue that will host this weekend’s round of the F3 calendar, gave Juan Manuel the first taste of Formula One machinery and represented a big learning opportunity for the Ecuadorian-American driver.

Having integrated well with the team and having had the chance to work with the engineers and crews of race drivers Kimi Räikkönen and Antonio Giovinazzi, Juan Manuel, who was competing in F2 at the time, impressed with his work ethic and innate talent, bringing the test to a successful end with 62 laps to his name.

His progression through the junior series was halted by a horrific injury in a crash at the tragic Belgian Grand Prix later that season but, having made a recovery that is nothing short of miraculous, Juan Manuel is back on track and ready to resume his journey – with the Sauber Academy by his side.

Juan Manuel Correa, Sauber Academy driver: “It’s very special to be back with the Sauber Academy: they’re the junior programme of the team I was with in 2019, when I had my first and only F1 test, and it’s a great feeling to be working with them again.

“I am very excited to show the Academy’s branding on my car and my helmet already from this weekend in France and I am looking forward to helping the team whenever needed, be it in the sim or elsewhere.

“I am very grateful to ART and Sébastien Philippe, and of course to Fred Vasseur, for all the support he has given me, and to everyone else at Sauber, from Beat Zehnder to all those who have been absolutely amazing and so supportive since my accident and throughout my recovery.

“It’s an honour to be back with this team,” added Correa.

Beat Zehnder, Sauber Motorsport Sporting Director: “Juan Manuel always displayed skill and determination, but his remarkable comeback from injury is an inspiring story that shows all his strength and willpower.

“We have nothing but sheer admiration for his tenacity and we are happy to help him, through the Sauber Academy programme, as he resumes his motorsport career.”

The Sauber Academy was launched in 2020 to represent, in conjunction with the Sauber Karting Team, a full development pathway, designed to lead drivers from grassroots to the pinnacle of motorsport and nurture the next generation of Formula One drivers.

Born under the auspices of Team Principal and CEO, Frédéric Vasseur, and under the direct supervision of Sporting Director, Beat Zehnder, the Academy will provide its inductees with the training necessary to progress on their way to their ultimate target, Formula One.

This will take the shape of mental and physical training, technical work with the team’s engineers, media training and work on the simulator – both for F1 and for the drivers’ respective series – in order to develop a complete and well-rounded driver, capable of dealing professionally and successfully all the on- and off-track challenges a career in motorsport delivers.