Hamilton: I don’t count Baku off as a mistake 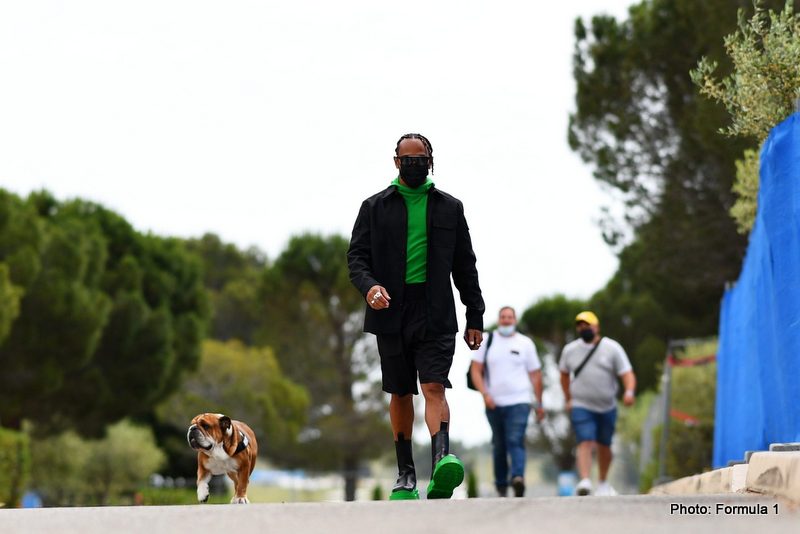 Lewis Hamilton said that he does not consider his restart off in Baku a mistake, as he looks to bounce back at the French Grand Prix this weekend.

Hamilton failed to score points for the first time since 2018 after missing the entry to Turn 1 following the red flag restart during the Azerbaijan Grand Prix.

The Mercedes driver lost the chance to retake the drivers’ championship lead from Max Verstappen in the process, with the Dutchman having retired from the lead due to a tyre failure.

While it had initially looked like the seven-time world champion missed his braking point, Mercedes explained after the race that Hamilton had inadvertently “clipped the magic button”, altering his brake settings.

Looking ahead to the French Grand Prix, the 36-year-old said that he and the team had learned lessons from the experience and were now focused on moving on.

“I don’t even count it as a mistake,” he said. “You can’t always be perfect, a mistake is where you drive off the track through missing your braking point or hitting the wall.

“But it was an unforced error, really something we had that was sitting there that could have happened at any point and it unfortunately bit us pretty hard. But we learned from the experience and we move forwards.”

Asked if the team had adjusted the brake magic setting in response, Hamilton explained: “We haven’t moved it, we’ve just put a shroud around it just to make sure that you can’t accidentally touch it in future, but that’s for the short-term.

“Obviously the wheel’s not so easy to change or to move buttons on, because it’s all designed, so we’ll look for a longer-term solution probably in the future.”

Mercedes have struggled by comparison with title rivals Red Bull across the last two races in Monaco and Azerbaijan, but Hamilton felt the return to a more conventional circuit in Paul Ricard would suit them better.

“The last two have definitely been really difficult for us on the whole as a team,” said Hamilton.

“You have to take the rough with the smooth and it’s definitely been challenging, but we’ve learnt a lot.

“But I’m definitely looking forward to getting back onto a track we probably won’t be as affected at with tyre temps for example. It has been good for us in the past here but I anticipate a tough weekend, naturally. Obviously the Red Bulls have shown some serious pace over the previous races, as well as on the more conventional tracks like Barcelona.”