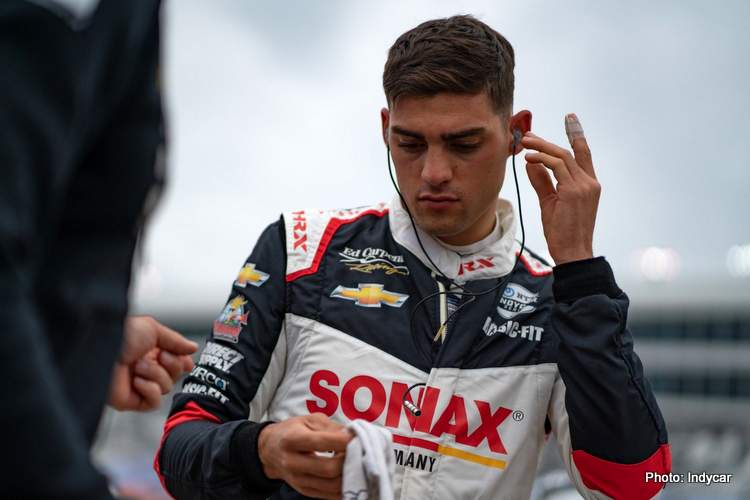 Dutch race driver Rinus VeeKay was injured in a cycling accident and his status for IndyCar’s race at Road America this weekend is uncertain, Ed Carpenter Racing confirmed on Tuesday.

The team said VeeKay was being treated for a clavicle injury by IndyCar’s medical staff. The team said in a statement the 20-year-old was injured the day before on a cycling trail during a training ride.

“VeeKay is in good spirits and has no other injuries,” the team said. No other details were released.

VeeKay posted a photo Monday of himself cycling alongside his trainer captioned “Riding to Chicago.” He had finished second on Saturday at Belle Isle in Detroit, then 18th when a penalty spoiled Sunday’s race after VeeKay had qualified third.

The Dutchman is one of IndyCar’s four breakout stars this season and picked up his first career victory last month on the road course at Indianapolis Motor Speedway. He then qualified on the front row for the Indy 500 and led 32 laps before finishing eighth.

VeeKay, last year’s rookie of the year, is fifth in the IndyCar standings and one of four first-time winners this season. He is also among a group of four IndyCar race winners this year aged 24 or younger.

VeeKay has won fans through his on-track performance and off-track engagement. He did a disco-style spin in driver introductions before his Indy 500 debut a year ago — showmanship aired only on television as the race was held without spectators — and it’s become his signature move.

Born Rinus van Kalmthout, he shortened his last name first to just VK and then VeeKay to help court sponsorship to fund his career. He found it was too difficult to use his full last name when calling potential partners in the United States.

He’s the only driver to win at every level of the Road to Indy ladder — six races in Indy Lights in 2019, seven races and the Indy Pro 2000 championship in 2018 and three races in USF2000 in 2017. VeeKay is mentored by two-time Indy 500 winner and fellow Dutchman Arie Luyendyk.

Although he lived on Main Street in Speedway across the street from Indianapolis Motor Speedway and rode his bike to work each day, he loaded up a Penske Truck Rental two days after this year’s Indy 500 and moved to Florida.

VeeKay told The Associated Press last weekend in Detroit the move was in part to relocate to a state where he could train outdoors year-round, but also it was his first true independent decision since relocating to the U.S. as a teenager.

He took pride showing videos of his two-bedroom apartment in a Fort Lauderdale high rise, and he said he didn’t ask for a discount when renting the moving truck from the company owned by IndyCar and IMS owner Roger Penske. (Report by Jenna Fryer)

First of all, thank you all so much for all the messages. The surgery has been successful, however I’m not medically cleared to participate in this weekend’s race in Road America. Very gutted about it, but all the best to @Oliver_Askew who’ll take my place in the #21 this weekend pic.twitter.com/MpUdymMeWw