Gasly: 15,000 spectators for my home race is great 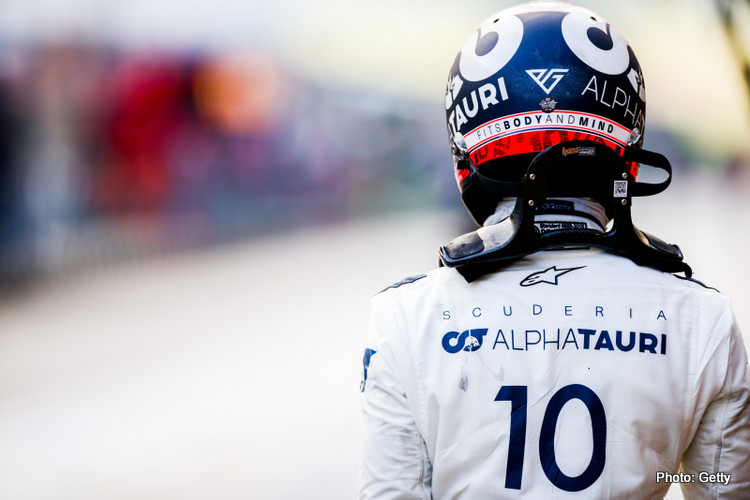 Pierre Gasly has welcomed the news that a limited fan capacity will be allowed to attend the French Grand Prix this weekend as he looks to build on an impressive podium in Baku.

Ever the opportunist, Gasly capitalised on a late red flag restart to finish third, holding off the charging Charles Leclerc in the closing stages with some excellent defensive driving.

The Frenchman has really picked up where he left off last season, leading the AlphaTauri team as youngster Yuki Tsunoda settles in alongside.

Looking back on a third career podium finish, Gasly said that he felt it was a deserved top three berth and reward for a great qualifying performance.

“I feel my podium in Baku was well deserved as the whole weekend was excellent, everything was going well in free practice and I felt really comfortable in the car, the potential was there,” he said. “We improved the car for Saturday, impressively quickest in FP3 and then in qualifying it was the first time we were really fighting for the chance of pole position, ending up a couple of thousandths off the fastest time.

“It’s come at just the right time, as we now have my home race at Paul Ricard. Everyone in France is getting very excited. There is a lot of enthusiasm and strong expectations for the rest of the season. The performance level we have demonstrated definitely makes us keen to see what we can produce in the coming races. We will tackle this weekend with the same approach as before.”

Gasly has just one top 10 finish on his record at the French Grand Prix, a trend he is hoping to change this weekend in front of 15,000 supporters.

“To be honest, I’ve not done anything special at Paul Ricard in the past,” he added.

“In my first F1 race here I collided with Ocon and had to retire on the opening lap and in 2019 it wasn’t a fantastic weekend and I ended up tenth. Actually, Baku was another track that had never gone well for me until this year and so I’m hoping we can follow the trend and change that this weekend also.

“The circuit is quite special with plenty of run-off areas, unlike the last two tracks, so the risks are not as high, but it is still quite complicated and technical because there are some types of corner here that you find nowhere else, in particular the Beausset corner in the final sector, the very long right hander followed by the left. In terms of the car, clearly our first job will be to work out the best set-up for this unusual layout.

“I’ve heard the organisers are allowing 15,000 spectators per day to attend, which is great as I was really hoping that fans would be there for my home race. It’s important to be able to share the weekend with them and it’s significant as it will be the first time I will race in front of a home crowd as a Grand Prix winner, after my victory in Monza last year. It’s going to make it very special so I’m feeling a bit impatient to experience that. And the podium in Baku has caught people’s attention, so I have had plenty of media interest to deal with. I don’t want to burn out before the weekend begins so we are trying to manage it as well as possible.”