McLaren: We’ll be racing in honour of Mansour Ojjeh 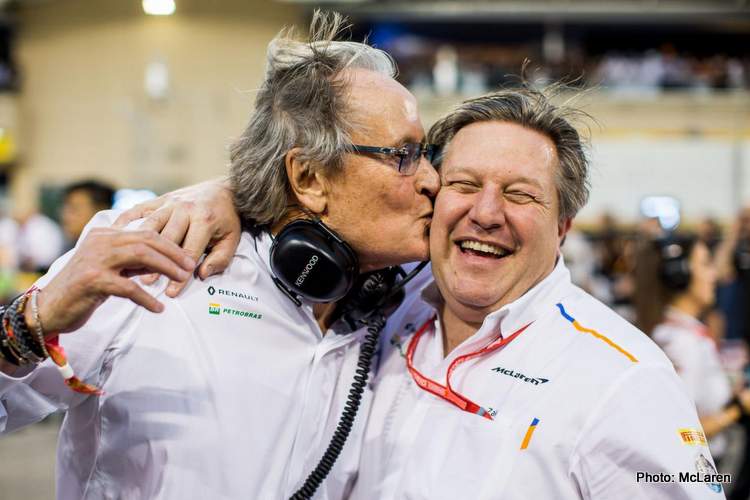 McLaren head to Paul Ricard with Mansour Ojjeh very much on their minds, they will race the 2021 French Grand Prix in honour of their long-standing patron and significant investor who passed away on 6 June.

In the team preview ahead of the forthcoming Formula 1 tripleheader starting in France this weekend, McLaren team principal Andreas Seidl said: “We’ll be racing in honour of Mansour Ojjeh this weekend. He was and always will be an integral part of the McLaren family and a true inspiration to all of us.”

As for the weekend ahead, Seidl explained: “After taking the time to analyse and understand the data from Baku, it’s clear that we still need to continue to take steps forward as a team and extract the most out of our package as we compete in a very close battle with our competitors.

“The Circuit Paul Ricard is a different style of track compared to previous races and therefore it’s difficult to understand the pecking order ahead of the weekend. Our priority going forward is to qualify well in order to put ourselves in the best position possible to score the most points on Sundays.

“We remain focused and determined to once again fight for good points this weekend,” asserted Seidl.

On the driver front, Lando Norris is very much on the up while new teammate Daniel Ricciardo has not found his sweetspot yet, the Australian will be looking to string a succession of confidence-boosting results in the forthcoming races.

Englishman Norris said in the preview: “Three races back-to-back can be intense, but everyone at the track and the factory is prepared and is continuing to give everything to give us the best chance to compete for points. We need to keep pushing as a team to extract the most out of the car to stay in this tight battle with our competitors.

“Switching from a run of street circuits to more traditional tracks with France and Austria will be an exciting challenge. It’s great to be returning to Paul Ricard for the French Grand Prix after everything that’s happened in the last year. It’s a fun, fast track with a mix of corners and opportunities for good racing.”

Ricciardo added: “We head to France this week to start the first triple-header of the season and I can’t wait to get started. Three back-to-back races can be seen as a challenge, but it’s also a great opportunity to get continuous time in the car and really build on the progress we’ve made so far.

“Being able to consecutively put more miles in over the next three weekends combined with the work we’ve done in the simulator will hopefully get us to a good place and continue to build my confidence in the car.

“We definitely had a productive weekend in Baku with several positive moments. I’m looking forward to racing at Paul Ricard this weekend.

“It’s a much more conventional and forgiving track than Baku that also comes with slightly fewer risks. So, let’s stay focused, try and make everything click and see what we can do!” concluded the Australian.

I extend my most heartfelt sympathies to the family of Mansour Ojjeh as we grieve his loss. Mansour was, and will remain, a hugely inspirational figure to me and was a large part of the reason I joined McLaren. pic.twitter.com/vQqOFCKnQJ