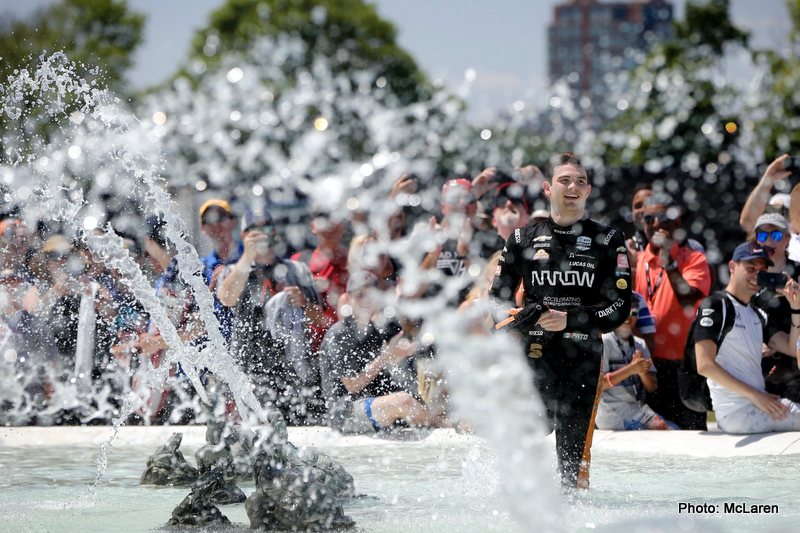 Pato O’Ward became IndyCar’s first repeat winner of the season by charging through the field Sunday on a final restart to steal the victory away from Josef Newgarden at the Raceway at Belle Isle Park.

O’Ward was fifth on a restart with seven laps remaining, but the 22-year-old from Mexico picked off Graham Rahal in the first turn, then Alex Palou in the next one for two passes in the first two turns. After passing Colton Herta for second, he set his sights on snatching what had seemed to be an easy victory for Newgarden away from the two-time IndyCar champion.

O’Ward went wheel-to-wheel with Newgarden and finally completed the pass with just over two laps remaining. O’Ward ultimately beat Newgarden by 6.7595 seconds and dedicated the win to Arrow McLaren SP teammate Felix Rosenqvist, who was hospitalised overnight following his crash in Saturday’s first race of the doubleheader.

“I talked to Felix this morning and the important thing is that he’s OK, but I told him ‘I’m going to win it for you,'” O’Ward said. “I’m a man of my word, I wanted to get it done for him.”

O’Ward, who earned his first career victory last month, took a one point lead over Palou in the championship standings. He has now won on an oval and a street course, and he finished third Saturday for two podiums at Detroit.

He removed his shoes after the podium presentation and dove into the James Scott Memorial Fountain, where he made a lap splashing the fans who had gathered on the side of the park landmark.

Newgarden started from the pole and led 67 of the 70 laps before O’Ward ran him down and dropped him to a second-place finish. Team Penske remains winless on the season.

“He was coming like a freight train,” Newgarden said of O’Ward.

“Heartbreaking day when you finish second like that,” he said. “It’s hard not to be disappointed. I thought we had the car to beat.”

Palou finished third for Chip Ganassi Racing, which swept Saturday with a win by Marcus Ericsson in the IndyCar race and then the first victory for the Cadillac sports car team in the IMSA with Renger van der Zande and Kevin Magnussen.

This time it was a Newgarden runaway until Romain Grosjean brought out a late caution with a brake fire and tried to put it out himself.

Small flames spit up from his right tire and he hurriedly climbed from the car, then looked for a safety crew for assistance. Grosjean ran to the fence and grabbed a fire extinguisher from a race marshal who passed it through a hole and rushed back to his car, which had black smoke rising from the front.

The safety truck arrived as Grosjean got back to the car with the extinguisher, and he was pushed to the side and out of the way.

Rosenqvist, meanwhile, was not seriously injured in Saturday’s crash when his throttle appeared to stick and his car drove directly into a tire barrier going at least 100 mph. The force into the six rows of tires moved the concrete barrier and Rosenqvist’s car was jammed in at a nearly 45-degree angle.

He was taken to a hospital for evaluation but released Sunday morning. Oliver Askew, who drove 12 races in that car last season as O’Ward’s teammate before he was replaced by Rosenqvist, was the emergency substitute.