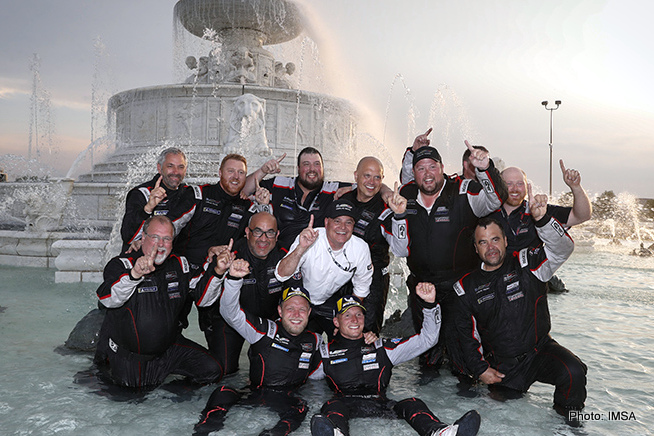 Magnussen started from the pole in a Cadillac and Renger van der Zande closed out the win for the first overall IMSA victory for a Ganassi car since 2015. Ganassi moved down a class in sports cars in 2016 and won its final race in 2019. The team sat out the 2020 IMSA season.

The programme was revived late last year as a Cadillac program and Ganassi for his lineup chose Magnussen, who had just lost his seat in Formula 1 and last won a race in 2013 in a World Series by Renault race in Barcelona.

Before the IMSA race began, Marcus Ericsson earned his first career IndyCar victory for the first leg of the Ganassi sweep. It was also the first win since 2013 for the former F1 driver.

“A lot of guys know how to drive fast,” Ganassi said. “But not everybody knows how to win races.”

Magnussen is not unlike his former Haas teammate Romain Grosjean, who lost his seat alongside Magnussen and moved to IndyCar this year for a chance to drive competitive cars. Grosjean has a pole and a podium finish through four IndyCar races.

Magnussen, though, now has a win through four IMSA races.

Magnussen and van der Zande had been in contention through the first three IMSA races – they led 225 laps at Daytona and 115 laps at Mid-Ohio – but Belle Isle was the breakthrough first victory.

It was the 60th win in IMSA competition for the Ganassi organization.

“You get used to winning races, you expect that, and that doesn’t happen in Formula 1,” Magnussen said. “After awhile, when you know that you don’t have a chance of winning, at the end of the day, no matter what you do whether it is motorsports or chess, you want to be winning.

“And so here we are and we haven’t been here for a very long time.”

Ganassi, who only revived the sports car team when General Motors contacted him late last year with an offer to become a factory-backed Cadillac program, took pride in delivering a victory in the shadow of GM’s headquarters.

“This program being here in Cadillacs backyard, a lot of participation from the corporation here at all levels of General Motors, so let’s face it, we’re in the racing business and we’re in Detroit,” Ganassi said. “There are a lot of eyes on you that normally wouldn’t pay so close attention. So it’s a feather in our cap and I think it is industry important.”