Hakkinen: Tyre blowouts are a worry for Formula 1 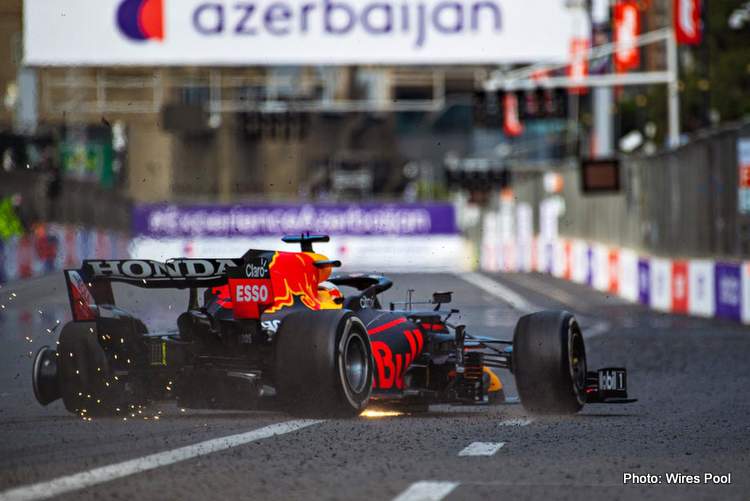 Mika Häkkinen, no stranger to highspeed blowouts, sympathised with Max Verstappen after the Red Bull driver crashed out while leading and in command of the 2021 Azerbaijan Grand Prix when his Pirelli tyre exploded.

Thus Verstappen was denied a 13th Grand Prix victory at Baku on Sunday; Hakkinen reflected on the incident in his latest Unibet column: “I have to feel sorry for Max Verstappen.

“He drove such a strong race from P3 on the grid, only to suffer that terrible tyre failure on the main straight, at maximum speed. There is a right-hand kink in the straight, which will have put load on the left rear tyre, and that is the one that failed.

“We need to wait for the result of Pirelli’s investigation, to see whether there was an actual problem with the tyre itself or a puncture caused by debris. Either way, it is a worry for F1.”

Double F1 World Champion, Hakkinen is no stranger to tyre blowouts, one incident nearly killed him during qualifying for the 1995 season finale in Adelaide. The violent 200 kph crash into the barriers, on the outside of Brewery corner, left the Finn critically injured due to sustaining a skull fracture, internal bleeding and a blockage of his airway.

His life was saved by the efforts of the trackside medical team, one of whom performed an emergency cricothyroidotomy at the trackside.

Hakkinen recalled: “I have experienced tyre blowouts, and it is never a nice experience. It is very sudden, violent and leaves you a passenger at 300kph. It was a tyre failure that put me in hospital at the Australian Grand Prix in 1995.

“And in 1999 I had tyre fail while driving flat out in Germany. When you feel the car go, you instantly start to try and correct the steering, but at maximum speed, there is really nothing you can do.”

In Baku, Lance Stroll suffered a similar fate when the left-rear tyre exploded, the Aston Martin hit the wall violently. It was a big shunt on tyres that were only 29 laps old; Pirelli predicted their lifespan to be about 36 to 40 laps.

Hakkinen continued: “What makes Max’s tyre failure more worrying is that it was the second one of the day, Lance Stroll having suffered the same fate in his Aston Martin. The fact that both incidents took place at the same location, at maximum speed, means that the FIA together with the teams and Pirelli will need to look carefully at all the data, and really try to understand the reasons.

“In Baku, both drivers were on their own, with no car alongside. They were also fortunate to spin and hit the wall with the nose section. At other circuits, this kind of failure could lead to a more catastrophic accident,” warned Hakkinen.

Pirelli are no strangers to controversy or blowouts for that matter, but as the sole tyre manufacturer, F1 is beholden to their supply which, without competition, has more than once made a mockery of a sport in which teams invest so much to be at the pinnacle of technology.

Competition breeds excellence, and without it mediocrity prevails as in the case of Pirelli in F1, since the powers that be decided to eliminate one of the most fascinating aspects of the sport: tyre wars.

The argument that it saves cost is not valid, with team’s adhering to cost caps in the future, there is no reason not to open F1 to other tyre manufacturers with a cost cap too.

By the nature of the power they hold, when things go wrong Pirelli are allowed to be perpetrator, investigator, judge, jury and executioner all rolled into one.

What happened in Baku twice to the same left Pirellis at very different stages of the race, on different cars, when tyres should have lasted at least another 10 laps does not need a rocket scientist to figure out. The answer is pretty clear: the tyres were dangerous.

Nevertheless, while Pirelli are off finding ways to exonerate themselves they have already seeded the cover-up with this Twitter message from their motorsport boss Maro Isola: “We need to clearly establish the facts behind the incidents involving Lance Stroll and Max Verstappen to fully understand what happened.

“What we can say for now is that there was also a cut found on Hamilton’s tyre and that it’s the rear-right tyre that actually works harder than the rear-left here.  No warnings or vibrations were detected and none of the other tyres of a similar age or older showed any signs of excess wear.

“So we can not exclude that the damage was caused by an external factor, although these things shouldn’t happen and we can understand the need for answers,” added Isola.

At the time of writing, answers have not been forthcoming as we wait on the findings from the Pirelli investigators.

Verstappen recalled the incident on Sunday evening in Baku: “I didn’t feel anything up until the moment that I suddenly went to the right, the tyre just blew off the rim and it’s not a nice impact to have, it’s quite a dangerous place to have a tyre blowout at that speed.

“Up until then I think we had a very strong race, I was basically matching the lap times that I had to do behind and we were fully in control, so I find it of course very disappointing what happened.

As for an explanation from Pirelli for the mishaps, the Dutchman said: “You’ll never get the straight answer on that.”