Vettel: Hopefully we can fight for points more regularly 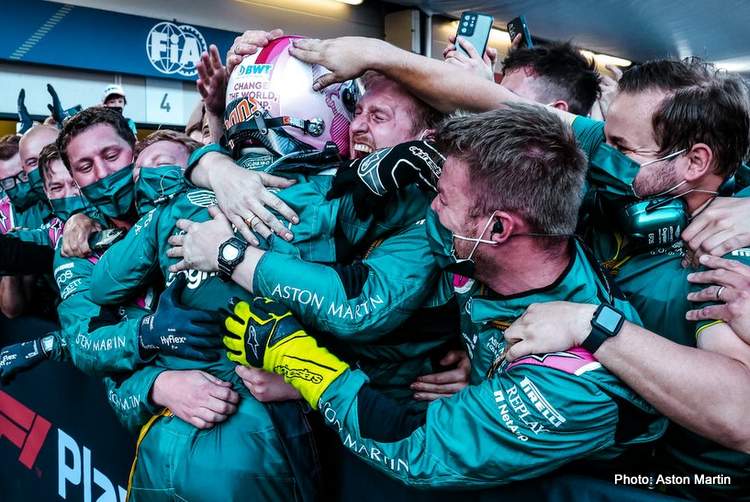 Sebastian Vettel was one of the unexpected stars of the 2021 Azerbaijan Grand Prix, scoring Aston Martin’s first Formula 1 podium and hopefully bouncing back to remain at the level of his former self.

A decade ago, Vettel owned F1 for four straight years he was almost unbeatable but since then, with a lot of water under the bridge, his form slid dramatically to the point that he was sent packing by Ferrari after a woeful 2020 season.

A lifeline to remain in the sport when all top team options were closed to him, came from Lawrence Stroll to head up his exciting Aston Martin project. On paper, it was a marriage made in heaven, but a tricky car and Vettel’s need to adapt to Mercedes power for the first time meant it was not plug-and-play for the German in Green.

There was little indication before the race that Vettel would be a points contender let alone a podium finisher. Except the German was quietly confident because he had a good feeling about the car.

And proved it on Sunday with a feisty second place, rewarded by fans for the Drive of the Day, revealing the Seb of old and triggering hope that he has his mojo back, able to contend for podiums regularly, as he once did. It was his 122nd F1 podium in 263 Grand Prix starts.

Formula 1 is better when Seb is good.

Speaking after his resurgent afternoon in Baku, Vettel said in the post-race press conference: “At the level that we are at it’s clear that everybody is able to drive a car very quickly so small things can make a big difference and yeah, probably took a little bit longer than I wanted to at the beginning of the season, to get on top of myself and adjusting to the car

“But I was confident that at some point it starts clicking and obviously Monaco was great. I think we had a good result there so that helps. You can argue that it takes off a bit of pressure but I think obviously the expectations, in general, are fairly high at the beginning of the year so it was good to get a good result.

“For [Baku] we were fairly open-minded. It’s another street circuit, it’s a place where I think you can make a difference if you really feel confident with the car and already on Friday I felt very good, even though the results were bad, but I wasn’t concerned.

“And then in qualifying unfortunately that one run I had a lock-up and we probably didn’t get the qualifying position we could get but it was one of the races this year where actually our race pace was very strong compared to qualifying pace.

“Other events we had a stronger showing in qualifying and then struggled a bit in the race. It was, if anything, the other way around so I was very surprised when I found myself in the race, at ease, following the AlphaTauris with Yuki in the beginning and feeling faster, feeling also comfortable to follow the Ferrari of Charles and putting pressure on so that he had to put pressure on Pierre.

“I felt quite comfortable in the car all weekend, which for sure doesn’t hurt, so hopefully we can – similar to Checo – carry that momentum into the next couple of races. France will be a normal track so we will see where we are but hopefully, we can fight for points a little bit more regularly,” added Vettel who has now scored 3,046 points in the top flight.

Has anyone else broken that replay button? 💚 pic.twitter.com/hcWiGYVu9b