Red Bull: That’s the #AzerbaijanGP in the windbag 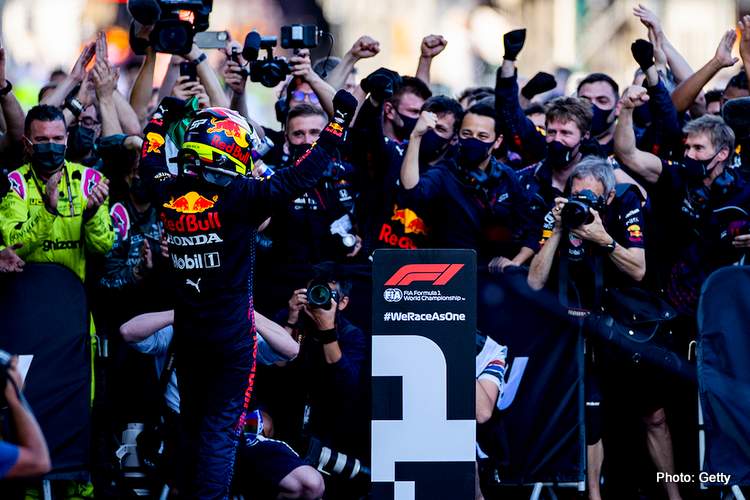 Red Bull showed their funny side by posting a cheeky tweet declaring: That’s the #AzerbaijanGP in the w̶i̶n̶d̶bag in retaliation to Toto Wolff’s remarks earlier during the weekend in Baku.

Wolff said Red Bull team boss Christian Horner “was a windbag who wants to be on camera” as the war of words between the pair ramps up as the Lewis Hamilton versus Max Verstappen intensifies.

After a dramatic Azerbaijan Grand Prix, won by Red Bull’s Sergio Perez which might have been a comprehensive one-two for the blues had Max Verstappen’s Pirelli tyres not exploded with the end in sight.

What might have been a morbid day for the Dutchman and his title aspirations, turned out alright as Lewis Hamilton made a mistake on the race restart, turning a sure podium into 15th place by going straight instead of turning right into Turn 1.

After bagging the win, Red Bull could not resist a dig at an incensed Wolff, after a rare no points score for the serial World Champions and fired off the Tweet:

While the Verstappen DNF and Hamilton’s no points means Baku was a stalemate in their title battle, but Sergio Perez’s victory on Sunday coupled to Valtteri Bottas’ mysterious no show means Red Bull extend their lead in the constructors’ championship to 26 points after six rounds.

This, of course, left Wolff incensed who told reporters after the race: “There are a lot of things that are not running as smoothly as they have done in the past few years. Operationally, we are not at our A-game, and we haven’t found the sweet spot of the car through qualifying and the race.

“There’s just so much that we need to improve, that I want to get on it right now after this call, in order to make sure that we are actually able to compete for this championship. You cannot continue losing points, like we’ve done in Monaco and here. It is just not acceptable for all of us.

“Everybody has to pick themselves up and I will do this and then we just need to get in motion to rectify the gaps that we have.

“We have 10 days to work on that between now and France and the championship is still wide open. It is very early days so we have to make sure the frustration disappears and satisfaction takes its place,” added Wolff, who has turned into quite a ‘windbag’ himself!