Alonso: It was a very productive last two laps! 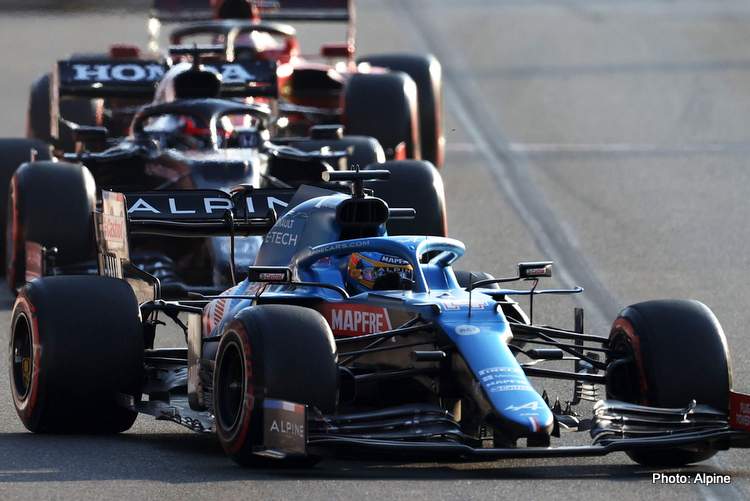 Fernando Alonso was the unsung hero of a drama-packed Azerbaijan Grand Prix, excelling during a stupendous two-lap sprint that decided the race in Baku.

The 39-year-old veteran has been slow finding the old fire that makes him such a formidable race driver. The Alpine is not a good F1 car and putting it into Q3 on Saturday was already an achievement. Teammate Esteban Ocon failed to do so.

From the start of Sunday’s race, the images of Alonso being overtaken easily on the straight were frequent, shades of “Formula 2 power’ in the Alpine. But when Max Verstappen’s Red Bull suffered a blowout, the red flag neutralised the race with the Spaniard tenth and opportunities beckoning.

When the race restarted, is when the “magic” emerged from Alonso as he scythed his way through a frantic and frenetic field, all intent of maximising the restart and subsequent two-lap sprint.

After an electrifying five minutes Alonso was sixth! It was a masterclass of opportunism by one of the most experienced men in motor racing.

“Two laps from the end I was tenth, it was a very productive last two laps!” declared Alonso into the Sky F1 microphones: “It was fun with the two-lap race at the end and a lot of opportunities, very aggressive everybody and we tried to recover places.

“We did manage to take some good points so I’m happy for the team, and the weekend was quite solid for us. I think tenth was too little reward after a good weekend, so I’m happy with sixth.”

Later, in the team report Alonso added: “The weekend was quite solid for us but we did lack a little bit of pace during the race. So we need to review that but I am happy with the day in the end and we’ll look to take this forward into France.”

Alpine executive director Marcin Budkowski, was impressed: “The heart-warming positive was some Fernando magic to regain four positions and finish P6, which is a great reward for everyone’s hard work.

“He’s back in a very competitive state and we now need to work together to get back on form at the next race in France,” added Budkowski.

Anorak Fact: This edition of the race in Baku was Alonso’s 321st start in F1 and the eight points scored for sixth place on the day takes his career points tally to 1,912.