Stroll: Not sure what happened to cause me to spin 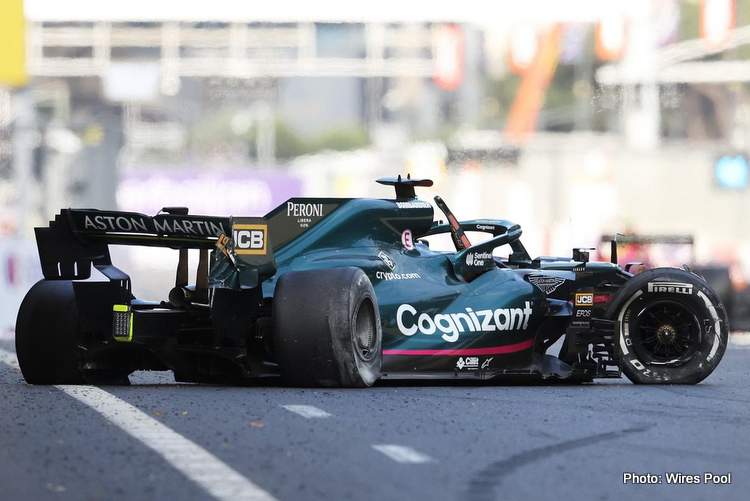 Lance Stroll crashed heavily during the 2021 Azerbaijan Grand Prix when his left rear Pirelli punctured at high speed, spearing his Aston Martin violently into the wall of the Baku City Circuit on Sunday.

It was a big impact, but Stroll was surprisingly lucid and calm as he reported his plight over the radio. That the Canadian was fine is again a testament to the strength of modern Formula 1 cars.

For Stroll, who scored his first podium in his rookie year in Baku, it was a big disappointment as Aston Martin had a strong strategy for the race today, as shown by Sebastian Vettel’s second place in the sister car.

“I am frustrated not to finish the race, but I am OK,” Stroll reported after the race. “We were on course to score good points by running much longer before the pit stops and overcutting a lot of cars.

“That proved it was the right call to start on the hard tyres because we had good pace throughout the first stint and the race was coming to us. I am not sure what happened to cause me to spin on the straight because there was no sign of any issues, so we need to investigate.

“It has been a challenging weekend for me, but there are positives to take, especially our race pace, and, of course, the podium for Sebastian. Huge congratulations to the whole team,” added Stroll.

Stroll was not alone suffering tyre failure on the day, as Max Verstappen’s rear also burst while the Red Bull driver led the race.

Team principal Otmar Szafnauer added: “Lance suffered a DNF through no fault of his own, having made very impressive progress in the early laps. He was soon running in the points, making the overcut strategy work well,.

“He was driving superbly on hard tyres when it all came to an end for him in a spectacular way on lap 31. We are investigating the cause of the accident, together with Pirelli.

“In summary, both Lance and Sebastian showed today that we have the race pace to compete at the very front of the midfield, or better, and that is what both of them will be aiming to do as the rest of the season unfolds,” concluded Szafnauer. (Additional reporting by Agnes Carlier)