Perez: I feel very sorry for Max he deserved the win 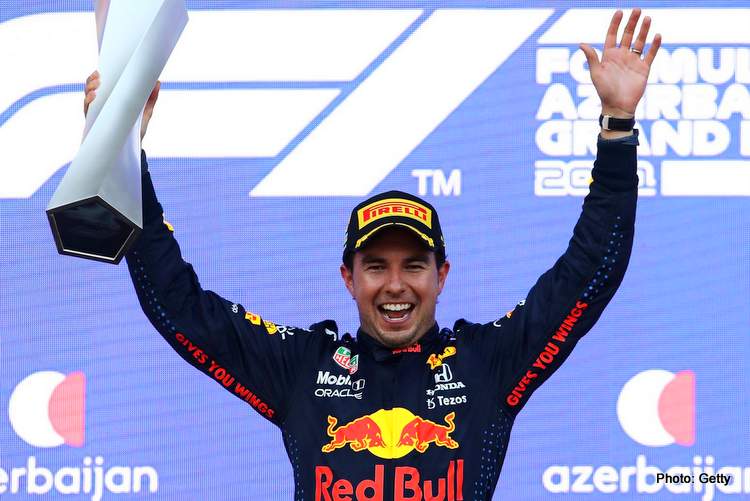 The 2021 Azerbaijan Grand Prix will go down as Sergio Perez’s perfect race, the Red Bull driver scoring a famous first win for them and showing precisely why he had to be brought into the team.

Prior to inheriting the lead when Max Verstappen crashed out with a Pirelli tyre failure while in command of the race, Perez was running strongly in second, paying the wingman to perfection as a buffer between his teammate and the Mercedes of Lewis Hamilton in pursuit.

It was going to be a Red Bull one-two until fate decided otherwise by being unkind to Verstappen and eliminating him from the afternoon show and promoting the Mexican veteran to the front where he stayed despite a late restart to claim his second F1 victory.

On his way to the win he ticked two important boxes for Red Bull that show exactly why he had to be hired in the first place:

Afterwards, Perez said in the Red Bull team report: “We love Baku! It feels amazing to get my first win with Red Bull. The team did a tremendous job and I want to thank Mr Mateschitz for this great opportunity and giving me the seat.

“I feel very sorry for Max because he deserved the win and a 1-2 for the Team would’ve been very enjoyable. It was a crazy rollercoaster of a race, we were basically flat out from the very first lap.

“I had Lewis behind pushing me so I couldn’t breathe, it was very challenging but we kept our focus. Everything worked perfectly today apart from the restart at the end where I just had no grip. I thought I cannot lose this race two laps from the flag so I braked as late as I could into Turn 1.

“I saw Lewis locking up and go straight on into the runoff. It just shows how on the limit we are, the speeds we are doing are tremendous. I am sorry for Lewis because it’s very painful when these things happen but we are all vulnerable to mistakes.

“We have to enjoy today, our pace was great and we have a very good race car. We are working flat out and giving our best every week. It’s only race six and there’s more to come from me.

“The relationship with Max and the team is great and there’s still a long way to go in this championship,” added Perez who now lies third in the drivers’ championships ahead of Round 8 in France two weeks from now.

Red Bull team boss Christian Horner was chuffed: “We are delighted for Checo to take his first win for the Team today. He has been extremely fast all weekend and it was a great boost for the Team to see him on the top step of the podium.”