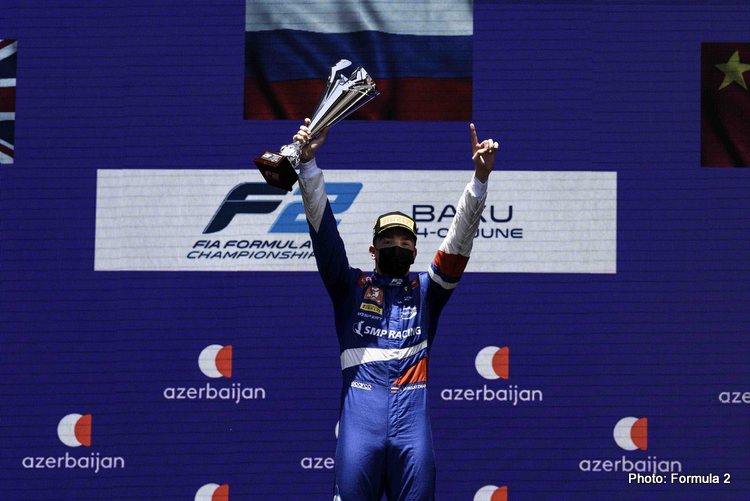 Robert Shwartzman has won the first Formula 2 sprint race of the weekend, reigniting his championship hopes after a tough start to the season.

The Ferrari Driver Academy member controlled the proceedings in Baku with a well-managed drive ahead of a heavily contested battle for the remaining podium positions which Dan Ticktum and Guanyu Zhou would claim.

Robert Shwartzman started on pole alongside Jehan Daruvala. Both drivers needed a strong performance this weekend to get their seasons back on track. With Baku sprint races won from as low as 12th in the past, keeping the pack behind them would prove a challenge.

Shwartzman got away swiftly while Jack Aitken spun at the back of the pack as the field went through turn 1. Fastest qualifier Liam Lawson collided with Oscar Piastri at turn 2, seeing the Red Bull junior end up in the outside Tecpro barrier. The safety car was deployed with Piastri also retiring meaning two championship contenders dropped out of the running very early on. The ball was now in Guanyu Zhou’s court to extend his lead at the top of the points standings.

The race got back underway as the field began lap 5 with Shwartzman leaving it as late as possible to put his foot down. Shwartzman was able to gap 2-seconds to the battling Daruvala and Zhou building a much-needed buffer that would be of great help down the main straight. After a four-lap long wait, Zhou would finally be released from behind Daruvala as he made a smooth DRS pass into turn 1 which allowed Zhou to cut into Shwartzman’s lead instantly.

Daruvala proved to be the cork in the bottle as a gaggle of cars lined up behind him. The first of which was Dan Ticktum who was running up to half a second a lap quicker than those ahead of him. Ticktum made swift work of Carlin teammate Daruvala and wasted no time on getting past Zhou just one lap later with an identical move into turn 1. The Brits focus was now on hunting down Robert Shwartzman who had built up a 4-second lead.

Theo Pourchaire came into Baku off the back of a maiden series win in the Monaco feature race in which he converted from pole position. In Baku’s race 1, he found himself in 7th, stuck in a train behind 4th placed Daruvala. Pourchaire would finally make forwards progress as he leapfrogged Ralph Boschung and set to work in lining up a move on Marcus Armstrong for fifth just a lap later.

Despite Ticktum’s charge from sixth on the grid, closing that 4-second gap to Shwartzman would prove to be too big of an ask. Especially with Shwartzman able to post a series of fastest laps in the closing stages. The dominant Shwartzman revived his championship hopes with a comfortable win over Ticktum, followed by Zhou. Pourchaire would snatch two bonus points from Shwartzman at the flag while ART Grand Prix teammate Christian Lundgaard’s struggles in 2021 continued with a lonesome 12th place finish.

Shwartzman’s points haul would put him fifth in the standings and close ground on the likes of Piastri and Lawson who retired early on from race 1.