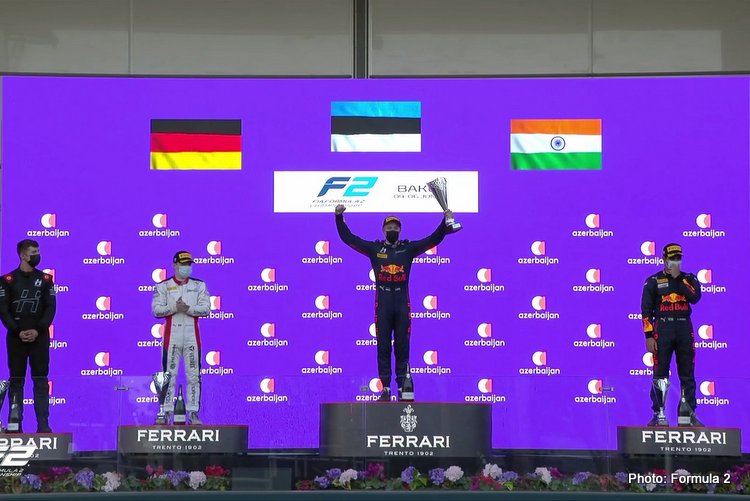 Juri Vips has won the 100th race in the modern Formula 2 era. In typical Baku style, the race proved to be one worthy of the milestone and full of drama for major title contenders.

The Estonian Red Bull junior adds his name to the winners in 2021 in a highly competitive FIA Formula 2 season. Rookie David Beckmann held on to second place while Carlin’s Jehan Daruvala managed third in a profitable day for the Red Bull programme.

With the grid for the second feature race determined by the reverse top 10 from race one, Bent Viscaal and David Beckmann led the field away in an all-rookie front row. Juri Vips had a great getaway from row two but was unable to get past Beckmann around the outside, Further back, Guanyu Zhou and Dan Ticktum came together as the former locked up, sending both cars into the vast runoff area. Zhou retired but Ticktum kept his car running and was able to rejoin the race. The leaders kept fighting until a safety car was deployed, but not before Beckmann was able to sweep around the outside of Turn 3, getting the move done at Turn 4.

After just one lap under the safety car, the race got back underway. Beckmann backed the field up until the last moment and a clean restart followed. Ticktum flew up the running order, making up four places in the first half of the lap. One of those came as Theo Pourchaire pitted to change his front wing having picked up damage on lap 1.

Juri Vips fought his way past Viscaal into second place and now his focus turned to closing down the nearly 2-second lead that Beckmann had already built up. Richard Verschoor found the wall at Turn 4 which apparently hadn’t already seen enough action after Formula 1 qualifying. Replays showed that Verschoor was given a helping hand by Roy Nissany, bringing out another safety car.

Beckmann again managed the restart well but chaos ensued again further behind as Christian Lundgaard’s poor luck in 2021 continued, sent into the barriers backwards by Felipe Drugovich. Marcus Armstrong ended his own race trying to overtake Viscaal for fourth place. Cold tyres wouldn’t allow such a daring move at Turn 5 and a Virtual Safety Car was triggered to rescue the stricken cars. Drivers including Ticktum and Liam Lawson had survived all of the chaos in the first ten laps, already threatening the top 5 positions.

Juri Vips flew past Beckmann with the help of DRS into Turn 1 having cut down the German’s lead in the laps prior. The Estonian had been biding his time behind Beckmann and once he had made the move, eased ahead and out of DRS range.

As the race settled down, gaps began to emerge in the DRS train except for between Jehan Daruvala and Viscaal, and Ticktum and Lawson with just a few laps to go. Ticktum managed to get past Lawson for 6th but to close in on Shwartzman for 5th with just one lap to go would be too big of an ask.

As the chequered flag, it was Juri Vips who came home first, maintaining a lead he earned early on and claiming a maiden F2 win. David Beckmann followed in second ahead of Jehan Daruvala. Viscaal finished fourth, Shwartzman again scored points with fifth while Dan Ticktum and Liam Lawson completed fantastic comebacks with 6th and 7th respectively.

With championship leader Guanyu Zhou falling out of the running at the first corner, the 100th Formula 2 race could have compromised his championship greatly. Although he goes home this evening without scoring points in this race, his second place in Race 1 and no podium in Race 2 for his close championship rivals softens the blow.