Meyer Shank Racing the little team that could 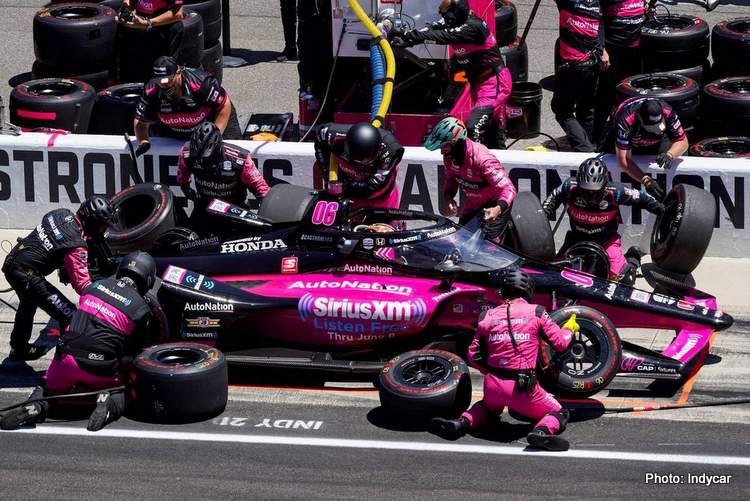 Co-owners of Meyer Shank Racing which won its first Indianapolis 500 on Sunday, Jim Meyer and Michael Shank hope their team is never again labelled as “the little team that could.”

They have been stressing that point for months now, and the emphasis reaching a much higher gear a few weeks ago when their primary driver, Jack Harvey, muscled a more established competitor aside in the May 1 race at Texas Motor Speedway. We belong here, Shank and Harvey stressed.

Indeed, they do, and now Helio Castroneves’ victory in the 105th Running of The Greatest Spectacle in Racing at Indianapolis Motor Speedway cements that.

“We’ve never believed that,” Meyer said of the minnows label. “We had a plan. We knew we were going to start very slowly. Mike was incredibly disciplined. I wanted to grow faster, but he explained to me how fast we could waste our money if we weren’t careful.”

Shank’s motorsports career began as a driver, and he started his first and only Indycar Series race in 1997 at Las Vegas Motor Speedway. But he quickly realized his opportunity for success could only come in team ownership, and among his early standouts was Sam Hornish Jr. in the Toyota Atlantic Championship.

After years of excellence owning sports cars, including winning the 2012 Rolex 24 at Daytona, Shank partnered with Michael Andretti in a Indy 500 car in 2017. They fielded Harvey, who finished 31st.

From that point, Shank grew purposefully, with Meyer, the former chief executive officer of SiriusXM, becoming more involved as time went. MSR added more races with each NTT Indycar SERIES season, becoming a full-time entrant in 2020 and adding an alliance with Andretti Technologies.

Sunday’s race was just MSR’s 37th Indycar race, the first time it has fielded two cars in a single race, and it was their first victory. It all seemed surreal for Shank, who remembers reading The Indianapolis Star mailed to his boyhood home in Ohio, and Meyer, an Indianapolis resident attending his 41st “500.”

“We would listen about the Unsers, Andrettis, the Rahals and just dream,” Shank said of his memories. “The minute I got out of high school, I started driving race cars, trying to find a way to get to this place, (and) how to win it.

“Twenty years ago, I was overworking on Formula Fords and (USF2000) cars at (Lucas Oil Raceway). That’s how I made my living, a thousand bucks at a time. To get here today.”

When the team got to INDYCAR, Shank stressed excellence. To have the right equipment, to look right and not “embarrass anybody.” Clearly, they’re on the right path. Under construction is a 43,000 square-foot shop in Pataskala, Ohio, that will house MSR’s Indycar and IMSA WeatherTech SportsCar Championship teams.

Now they’re big-time. Indy winners and a team to be reckoned with.

Simon Pagenaud (No. 22 Menards Team Penske Chevrolet) fell just short of his second “500” victory after starting 26th, the lowest of his IMS career. But he was even farther back in the order after Andretti Autosport’s Stefan Wilson (No. 25 LOHLA SPORT/Cusick Motorsports Honda) spun on pit lane on the race’s first round of pit stops.

Seven other drivers joined Pagenaud at the rear of the field for taking a limited amount of “emergency” fuel in a closed pit.

Pagenaud finished five-tenths of a second behind Castroneves and nearly side-by-side with Chip Ganassi Racing’s Alex Palou (No. 10 NTT DATA Honda) for a third-place finish.

“What a shame,” Pagenaud said. “I really think we had the race car to get it done today. It hurts to be third. Maybe one more lap I would have had a shot at Helio, who knows. But it’s only 500 miles. We should have (made the move) earlier.”

Pagenaud was one of the first to congratulate his former Team Penske teammate. He was proud of his friend, and he said he was proud of his team’s effort, but Indy leaves non-winners feeling bittersweet, he said.

“The draft was difficult (deeper in the pack),” Pagenaud said. “It was difficult to get through Pato (O’Ward for third place). We did on the last lap. I thought I might have had a shot (at the lead) in Turn 4, but Helio was too fast.

“Congrats to him. He’s writing a huge page of the 500-mile history here. Finally, a guy of our generation is in the ‘four’ club. That’s very special. He’s a great friend, and he just gave me 10 more years in my career to go catch him. Thank you, Helio.”

Pagenaud was trying to do two things at once: Charging forward while watching Castroneves work on Palou.

“This place is all about experience,” Pagenaud said. “I mean, what Helio did at the end, I want to rewatch it (on television).

“I don’t know if you guys picked up on it, but from Lap 185 until he chose to go to the front, he was just playing. He was learning. There was a lot of that between me and (Alexander) Rossi in 2019, but I think (Castroneves) just took it to a whole ‘nother level.

“To me, Helio was going to be the guy at the end. He was just biding his time. It showed the smartness, what goes (on) behind the helmet in a race car.”

The driver wearing the yellow Pennzoil suit that Castroneves once wore so well couldn’t muster even a tenth of the energy of the winner of the “500.”

Simply put, Castroneves’ replacement at Team Penske – Scott McLaughlin – was irritated with himself for a mistake on pit road that cost him a top-10 finish.

“One mistake just eats you,” the driver of the No. 3 Pennzoil Team Penske Chevrolet said. “You can’t make mistakes here. It genuinely needs to be a perfect day.

“(IMS) is a place that really bites you when you don’t think it’s coming. I just make a simple mistake. Didn’t quite pump my brake pedal up enough. I had a pretty stone-cold set of rotors going into pit lane there, (and I) couldn’t pull (the pedal) up.

“Thankfully no one was hurt because I came in there pretty hot.”

The car swerved, forcing McLaughlin to use quick hands to keep the car off the inside pit wall.

McLaughlin was penalized for speeding on entrance to pit lane, requiring a drive-through penalty. Instead of possibly finishing inside the top 10, the rookie settled for 20th.

McLaughlin and Pietro Fittipaldi were the only rookie drivers to earn a starting position in this field. Fittipaldi finished 25th in the No. 51 Military Salutes NURTEC ODT Honda.

McLaughlin wasn’t the only driver who had trouble getting his car slowed entering the pits. A similar brake pedal issue appeared to happen to Andretti Autosport’s Ryan Hunter-Reay (No. 28 DHL Honda), forcing him to lock up his tires. He, too, was assessed a drive-through penalty.

Wilson lost control on his entrance to pit road on Lap 33. Will Power, the winner of the 2018 “500” and the driver of the No. 12 Verizon 5G Team Penske Chevrolet and Simona De Silvestro (No. 16 Rocket Pro TPO/Paretta Autosport Chevrolet) also had spins on pit road.

“Coming out of Turn 4 at 220 mph, then you have to slow down to 60 mph in a hurry with a car that has very little downforce,” Pagenaud said. “The brakes obviously are cold. It’s very treacherous.”

Power’s race almost didn’t get started because his car didn’t immediately fire. The crew had to pull the car back to the pit box to get it rolling, and he joined the field on the second warmup lap.

Graham Rahal and the Rahal Letterman Lanigan Racing crew had played the fuel strategy right, and they were positioned to earn the driver’s first “500” win.

But on the pit stop on Lap 119, the crew didn’t get the left rear wheel on securely, and it came off the car as Rahal accelerated toward Turn 2. When the wheel came loose, the No. 15 United Rentals Honda spun into the SAFER Barrier. The bouncing tire was then struck by Ed Carpenter Racing’s Conor Daly (No. 47 U.S. Air Force Honda). Fortunately, Daly’s car wasn’t severely damaged, and the tire landed without additional damage.

“It’s famous last words, but we had them – we had them,” Rahal said. “The fuel saving that we were doing, the car, we were in a perfect spot. We were just cruising. Our strategist played it right. I felt like I was doing a good job. The car, we got ourselves where we needed to be. We had them today.”

Then, Rahal apologized to his team’s sponsors: “I’m sorry we didn’t win this because we should have.”

Daly not only led a race-high 40 laps, but those laps were the first of his career out front in the “500.”

Pole sitter Scott Dixon of Chip Ganassi Racing (No. 9 PNC Bank Grow Up Great Honda) and No. 10 qualifier Alexander Rossi of Andretti Autosport (No. 27 NAPA AUTO PARTS/AutoNation Honda) tried to stretch their fuel on the first sequence but got effectively ran out of fuel on pit road when they couldn’t stop due to Wilson’s car blocking the entrance.

Their cars required a significant amount of time to get the engines restarted. Both lost a lap before the restart on Lap 46. Dixon got back on the lead lap and finished 17th. Rossi finished 29th, two laps down.

“An unfortunate day for us,” Dixon said. “(The caution) hurt a few of us, but yeah, that’s how it goes.”

Dixon was his usual level self when the race was over, in part, he said, because the incident happened so early in the race and said: “I had a lot of time to cool down.” (Report by Curt Cavin)