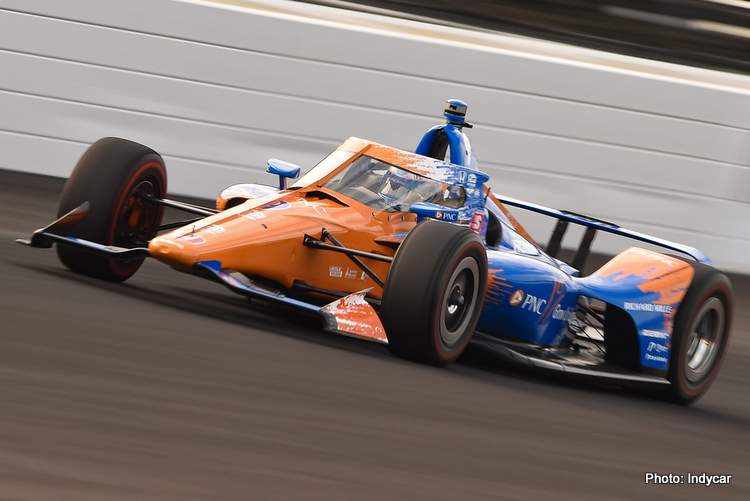 New Zealander Scott Dixon ran to the top of the board in the final practice before the Indianapolis 500 and called it a day with 45 minutes remaining in the traditional “Carb Day” session.

“Hopefully it runs this good in the race,” Dixon said after his lap at 228.323 mph put the six-time IndyCar champion in control of Friday’s practice. “I was told we were done. We got through our list. I thought the car felt good.

“Also the conditions, I thought everyone was going to feel like King Kong out there.”

Dixon packed his helmet and calmly headed back to the paddock, his rivals taking nervous notice of confident the pole-sitter is ahead of Sunday’s Indy 500.

“We changed our plans when we saw that. We knew we were in trouble,” joked Will Power. “Completely changed the car. I thought I was safe, then I saw him get out. That’s it, it’s over.”

Rain disrupted the traditional Carb Day practice but IndyCar was able to get cars on track for almost two hours later Friday afternoon. Indianapolis Motor Speedway leased “Air Titan” track dryers from NASCAR to get the 2-mile track dry for a practice session in which all 33 cars got on track.

The session was shortened for the final 10 minutes when it once again began to rain, but not before Team Penske showed its ready to race Sunday and the rest of the field indicated it should be a rather exciting show.

“The racing is amazing right now,” said Colton Herta, who will start second alongside Dixon. “I hope it stays this cool for the race because it is actually a lot of fun out there.”

The biggest surprise was Team Penske, which struggled in qualifying and nearly missed this edition of the Indy 500 with Power; one of the greatest qualifiers in IndyCar history had to fight his way into the 33-car field and rookie Scott McLaughlin at 17th was the highest-qualifying Penske driver.

“I honestly felt bad for Will. Obviously, he’s a fierce competitor. Seeing the struggles, not him, but the team are going through for qualifying pace,” Dixon said. “He’s probably the greatest qualifier of our era if not all time. You definitely know it’s not him, it’s just one of those frustrating things.

“He handled it extremely well. Kudos for keeping his foot in it, too, which made for some great TV, some great Internet stuff, as well.”

Team owner Roger Penske said his four cars would be just fine come race day and that seemed to be the case in final practice. Simon Pagenaud, the 2019 race winner, was second fastest and followed by Josef Newgarden in third. Power, the 2018 winner, was sixth while McLaughlin was seventh.

Conor Daly, meanwhile, was fourth fastest on the day in yet another strong showing for Ed Carpenter Racing. But the American said Friday was his worst day of the month and he was furious after a near on-track miss with Santino Ferrucci.

Marco Andretti, meanwhile, was fifth fastest after rebuilding the floor of this car Saturday following a disappointing qualifying effort. The change had an immediate effect and Andretti now believes he’s got a shot at winning the the Indy 500.

“I’ve had a car to win this race a lot of times. I’ve said that before the race,” Andretti said. “We just have to see if the stars align, do our job, slowly get there, hopefully stay out of messes. But the field is pretty stacked, very talented, hopefully very smart.”

Andretti was the pole-sitter a year ago but the first since 2001 to fail to lead a single lap in the Indy 500. (Report by Jenna Fryer)

2020 @IndyCar Championship worn @scottdixon9 suit is now up for auction. 100% of proceeds go to @AllChildrens hospital in St Pete. The 6 time Champ has just signed the suit for one lucky winner. Bid now at https://t.co/Y47Uzg2cuP @kart4kidsproam @CGRTeams @BourdaisOnTrack pic.twitter.com/sWulmT49kL