Fittipaldi: A privilege to be in the World’s Greatest Race 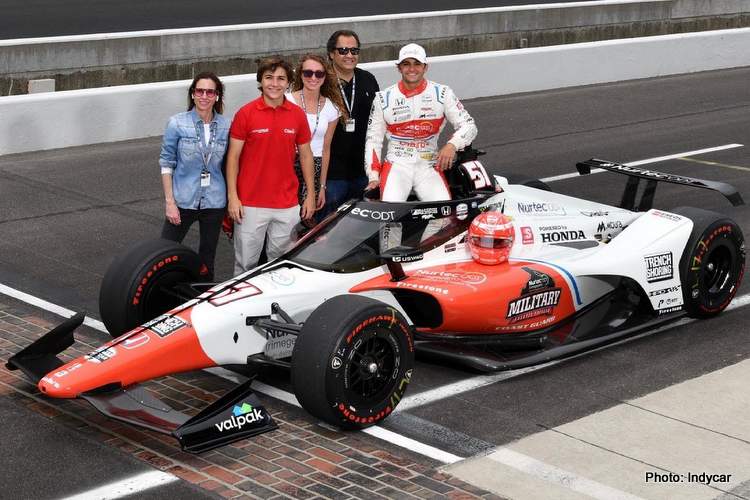 Pietro Fittipaldi has taken an unlikely route to this year’s Indy 500 where he qualified as the fastest rookie for the 105th running of America’s great race, where he aims to carry the family name with honour.

Fittipaldi is the grandson of Formula 1 legend Emerson. But the 24-year-old Brazilian is no stranger to racing in the USA having won the 2011 NASCAR Whelen All-American Series driving for Lee Faulk Racing.

Since then his career took a winding path as he contested numerous series over the past decade, winning minor titles along the way.

In 2018, he was scheduled to make his Indy debut before he suffered serious leg injuries in a crash during a World Endurance Championship sports car event at Spa-Francorchamps, only 11 days before Indy 500 practice that year.

Indycar.com report that doctors told Fittipaldi it would take over a year to return to racing, with a chance that the injuries could be career-ending. However, he defied that diagnosis and returned in less than three months, while his legs were still healing.

Later that season finished an NTT Indycar Series career-best ninth at Portland thanks to the help of a specially created cast and an aggressive rehab program.

Fittipaldi also came onto the F1 radar in recent years, after a spell with the Ferrari Driver Academy he landed a reserve role with Haas F1 Team. He was called into duty for the two final races of the 2020 F1 season where, replacing injured Romain Grosjean, he acquitted himself well despite little running in the car and F1 for that matter.

Now as he prepares for his Indy 500 debut, he acknowledges the weight of such a legendary name, Fittipaldi says he only feels the pressure he puts on himself and added: “I love racing, I love competing, I love winning races – that’s why I do it. So, for me, it’s just a privilege to have the name, to be carrying on the legacy of the family here in the 500, to be racing in the biggest race in the world.”

Driving for Dale Coyne Racing with RWR , Fittipaldi qualified 13th with a four-lap average speed of 230.846 mph. He was the fastest of the two rookies who qualified this year for the Indianapolis 500, with Australian sensation Scott McLaughlin to start 17th in the No. 3 Pennzoil Team Penske Chevrolet.

Fittipaldi reported: “It was amazing, great to be there and to get presented the award, have my name on the trophy that has so much history with all those drivers there.”

While good fortune favours him at this point of his career, Fittipaldi tips his hat to overcoming the hardships that made him stronger: “I had to go through a lot of things after the accident, overcoming that, and being able to overcome it mentally, as well.

“I definitely feel more prepared this time. Not only as a driver but as a person, as well. I feel from what happened in 2018, I’m even more appreciative to be racing,” he added.

While Pietro’s grandfather is arguably better known for his F1 exploits, Emerson forged an impressive career Stateside winning the Indy 500 twice and CART Champion in 1989.