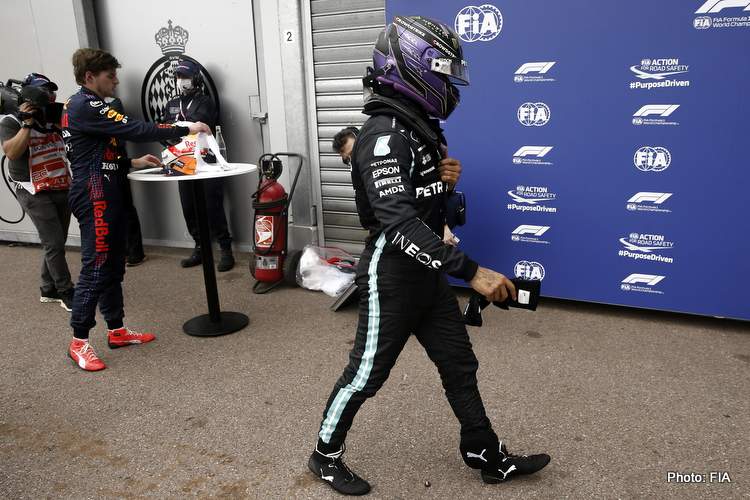 Lewis Hamilton was clearly incensed after the 2021 Monaco Grand Prix, declaring that the day was packed with hard lessons for his team, a statement that did not go down well with ex-Formula 1 driver Jan Lammers.

On Sunday in Monte-Carlo, Mercedes and Hamilton relinquished their lead in both F1 world championship standings to Red Bull and Max Verstappen, after a woeful display by the World Champions.

Seventh place was the best Hamilton could muster after a race to forget for his team, with Valtteri Bottas – in serious contention for a podium – suffering a DNF thanks to a stubborn wheel permanently married to an axle.

After the race, Hamilton was asked if there were lessons to be taken from Monaco, to which he replied: “Lessons for me? No. Lessons for the team…”

That was harsh coming from a driver who owes so much to what is the mightiest team the sport has ever witnessed; one that only weeks ago was being hailed as strategy masters for winning earlier races from the pitwall. One that can carry him to an eighth world title.

Granted, no longer bristling with adrenaline, later Hamilton clarified his post-race comments: “I’m not pointing my finger at anyone. We will have constructive discussions.”

Nevertheless, it was steep from a driver who prides himself with his team that take the many ups and the rare downs together, a fact that did not escape ex-F1 driver Jan Lammers.

Speaking to Ziggo Sport, the Dutchman said of Hamilton’s reaction: “I thought that was a little inconsistent. When things go well, he will thank everyone at home for their hard work, but I think he could have apologized to everyone after Monaco.

“He thinks he did nothing wrong as a driver, it was the team. I don’t think that’s fair, you win together and you lose together. I would have thought it appropriate if he had just said he didn’t get the best out of qualifying and paid the price.”

To back his claims, Lammers pointed out: “Apart from the first practice sessions on Thursday, he was slower than Valtteri Bottas all weekend.”

Indeed records show that in FP1 and FP2 on Thursday, Hamilton was the quicker of the Mercs and only bettered by the on-form Ferrari duo of Charles Leclerc and Carlos Sainz.

On Saturday, Hamilton was clearly out of sorts while Bottas was closer to the sweetspot, finding an extra quarter-second over his teammate in FP3, and then in qualifying really upstaging the World Champion:

Seldom has Hamilton been so well beaten by a teammate on a Saturday. As a three-time winner in Monte-Carlo, the seven-time F1 World Champion knew that seventh on the grid (which became sixth after Leclerc’s DNS) was always going to be a slog.

Lammers explained: “Hamilton dropped the ball during the most important qualifying session of the year. And it might be a bit silly to say but, as a top driver, you have to be there when it really matters.

“He just didn’t do well enough in qualifying. He was lagging behind due to a lack of pace and he can only blame himself for that. That he then tried to conceal it a bit and, more or less blames the team, I find that a little too easy.”

However, Lammers conceded that Mercedes were not on point with their strategy at Monaco: “I thought it was strange that they brought him in so early because when you are in that position, you just have to drive on those tyres for as long as possible. It is curious they didn’t.

“Ultimately, they make the calls together and Hamilton, as he has done in the past, could also have said to his engineers: No way, I’ll just keep going. He could have done that too, but he didn’t.

“Thus, I find it a bit strange he is not a more consistent with his team. That’s a shame because I think he was busy showing a nice side of himself this year. I thought it was refreshing to see how relaxed he was and not always come up with an overly media-savvy answer, but then you suddenly have this. You always get to know people best in times like this.

“If it were normal people among themselves they would say: If you had not messed up qualifying, we wouldn’t have had this problem. It was just a bad weekend for Lewis.”

While Hamilton may have disappointed, Lammers was impressed with luckless Bottas in the other Mercedes: “What I find did not get deserved credit last weekend was Valtteri doing so well

“He was even able to put a bit of pressure on Max, although it was all under control. Yet, we all often complain about Bottas but he was well on it in Monaco.”